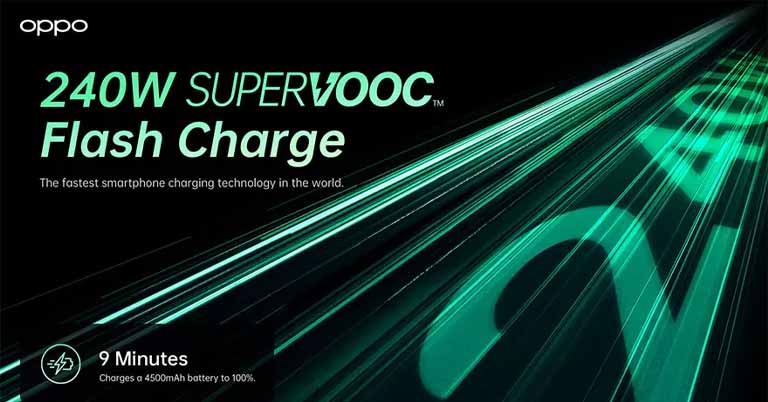 Oppo has announced its new fast-charging solution at the MWC 2022 event, called the 240W SuperVOOC Flash charge. With this, the brand now sits at the top of fast charging technology in the world. Here, we will be learning more about Oppo 240W SuperVOOC charging in detail.

Xiaomi has previously showcased its 200W HyperCharge Technology that’s capable of charging a 4000mAh battery in under 8 minutes—placing it at the top of the fastest charging solutions.

Oppo, however, has now taken the crown with the announcement of the 240W SuperVOOC solution. The brand has shared a video in its social media handles that demonstrates this breakthrough technology.

With this solution in hand, a 4,500mAh cell can be charged to 50% in about three and a half minutes, and the battery can be fully charged in only nine minutes.

According to Oppo, “they took a holistic approach for the safety of the adapter, charging cable and the handset with which OPPO minimizes potential safety hazards and risks, providing an efficient and secure charging solution”.

To provide a safe charging solution, the company has included five safety protection measures and a specifically customized control chip to govern voltage, current, and temperature. In addition, 13 temperature sensors have been put in the test device to monitor overheating and other abnormalities.

Per Oppo, the 150W SuperVOOC with BHE will maintain 80% battery capacity after 1,600 charging cycles. That’s twice as much as Xiaomi claims for its 11i Hypercharge smartphone. Furthermore, the brand has utilized GaN (Gallium Nitride) to minimize the size of the adapter. In an image shared in the official blog post, the size of Oppo’s 150W and 65W chargers appear to be nearly identical.

When to expect them commercially?

As of now, there’s no word on when the new 240W SuperVOOC charging tech will make its commercial debut. However, Oppo has announced that the 150W SuperVOOC solution would be available on a OnePlus smartphone in the second quarter of 2022.