Home Reviews Xiaomi 11i Hypercharge Review: 120W Charging, But Is That It? 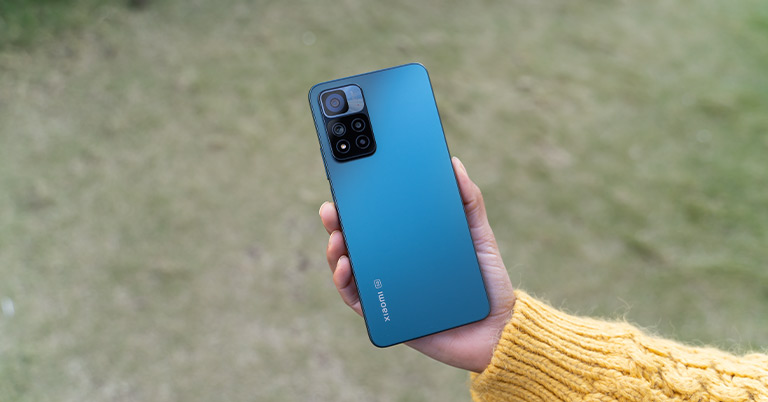 Last month, we saw a lot of smartphone launches from various brands and it seems like the launch spree is continuing in February as well. And this is my review of the new Xiaomi 11i Hypercharge after testing it for almost 3 weeks now! If you are not aware, it is Xiaomi’s latest mid-range smartphone for the Indian market and the successor of the incredibly popular Mi 10i from last year. 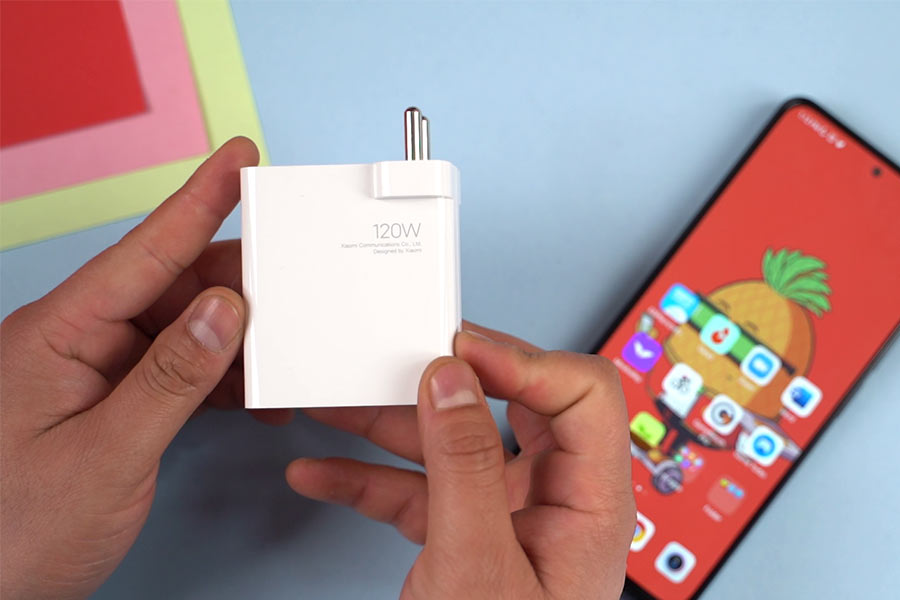 In Xiaomi’s defense, they have included this 120W charger inside the box, which itself costs 4,000 Indian rupees according to the global VP of Xiaomi, Manu Kumar Jain. Goes on without saying that this charger is insanely fast and can take the phone from 0 to 100% in just about 18 minutes.

But what about the other crucial aspects of the device? Is it on par with the competition? Let’s discuss all that in this review of the Xiaomi 11i Hypercharge. 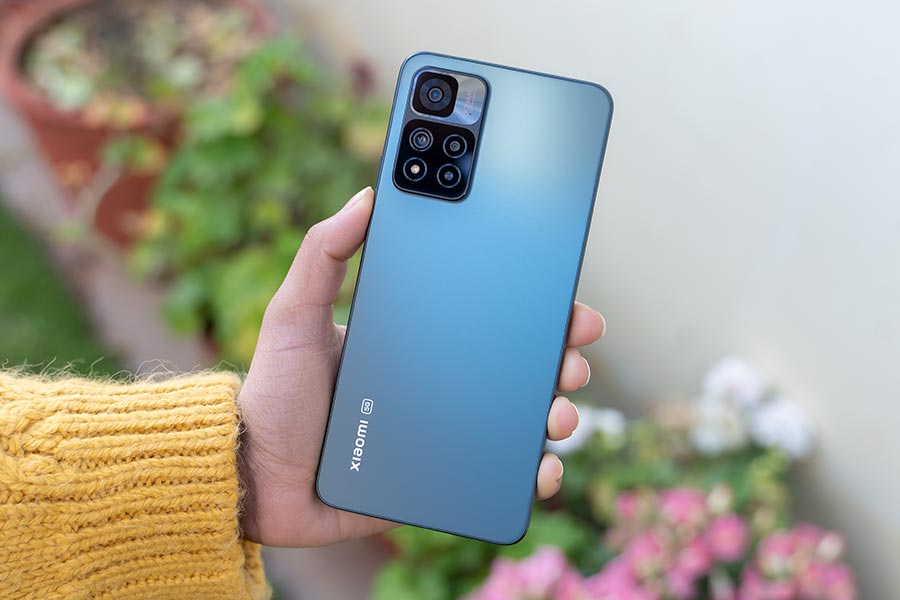 So, starting with the design and build quality, it’s quite different from what other Xiaomi phones looked like in the past. It has this boxy-looking form factor, which is reminiscent of the iPhone 13 series. And if you use it without a case, you might have a difficult time holding it because of the sharp edges. But over time, you should get used to it.

The back here is made of glass and feels plenty premium. I have it in this light green color that looks quite refreshing and doesn’t gather too many fingerprints and smudges. There are also no complaints from my side in terms of weight distribution since it has that solid heft I’ve come to expect from a smartphone.

Still and all, I would have loved it even more if Xiaomi had given metal frames here. But I completely get it since this is a part of the cost-cutting measure. Xiaomi still offers an IP53 rating on the 11i Hypercharge—and is among the few brands to provide such splash-resistant properties on its budget and mid-range phones.

Moreover, you also get an IR blaster and a 3.5mm headphone jack here. The latter, as you know, is pretty rare these days even on mid-range phones, so that’s something we got to admire about Xiaomi. 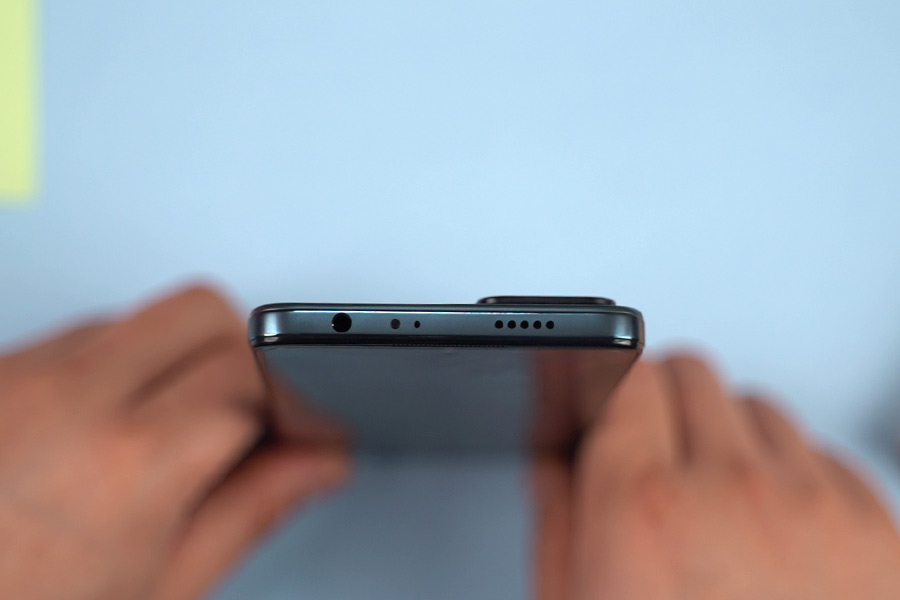 On the other hand, the volume rockers here aren’t the most tactile ones but get the job done. This power button doubles as a capacitive fingerprint sensor as well, which is fast and accurate. And definitely faster than the one you get on cheaper Xiaomi phones like the Redmi Note 11.

Over on the front, we are greeted with a 6.67-inch display that ticks all the boxes—at least feature-wise—that you expect from a phone of this price in 2022. This AMOLED screen refreshes at 120Hz and is complemented by a faster 360Hz touch sampling rate, up to 1200 nits of brightness, HDR10 compliance, Widevine L1 certification, and what have you.

For protection, Xiaomi has gone with the good old Gorilla Glass 5 on the 11i Hypercharge. In actual real-world usage, this display is better than last year’s Note 10 Pro and slightly inferior to the one you get on the Mi 11X. Plus, in the recommended “Vivid” picture profile, the colors are slightly more punchy and vibrant—but it looks really good.

As expected from an AMOLED panel, the contrast here is top-level, which is especially noticeable when watching content with a dark ambiance. This display can also get plenty bright and you will have no issue texting or checking your messages even if you are outdoor.

However, the minimum brightness on this thing is a bit higher, meaning not the most comfortable experience if you happen to be a night owl.

Plus, one underlining issue that I faced with this display is that whenever I tried watching HDR videos on Netflix, there’s this weird pale hue and over-sharpening going on which completely ruins the experience.

I don’t know if this is the new MediaTek Dimensity 920’s inability to process HDR videos effectively—or I have Netflix to blame. At the end of the day, the frustrating thing is that despite multiple reports from both the general users as well as a few reviewers, neither Xiaomi nor Netflix have pushed any update addressing this issue.

To make matter worse, we are well familiar with the fact that Xiaomi doesn’t have the best-of reputation when it comes to software.

Apart from the poor dark mode implementation in some apps and some frequent freezes in Messenger, I haven’t faced any major issues with MIUI on this phone. But to be honest, you never know what you will stumble upon in the future. Likewise, I am pretty surprised to see Xiaomi not specifying the number of years of guaranteed software updates for the 11i and 11i Hypercharge.

This is a bit concerning because the company did promise 3 years of OS updates for the 11 Lite NE 5G, which costs the same as this phone. So, I think they need to maintain some level of consistency going forward.

Is the Dimensity 920 any good? Nonetheless, you will definitely enjoy using the Xiaomi 11i. It’s respectably fast enough, apps open quickly, and multitasking has not been an issue either with the 8GB RAM variant that I have.

But having used so many phones with the Snapdragon 870 or the Dimensity 1200 chip lately, this one feels a tad bit slower. Then again, if you are coming from a budget or mid-range phone, the Xiaomi 11i Hypercharge is going to feel faster—and also smoother—with that 120Hz display.

Another thing where the Dimensity 920 is good at is handling thermals. Be it while gaming or using heavy apps, this thing doesn’t throttle at all. If you recall, MediaTek processors were always a victim of overheating. And to come from that to this is a job well done. I’m also pretty satisfied with its gaming performance. 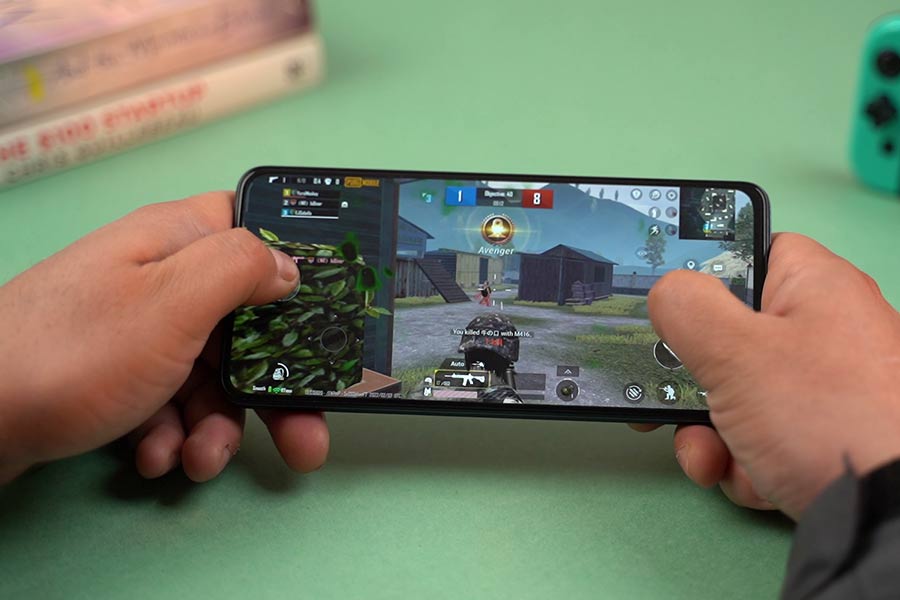 Similarly, Call of Duty is another high-end game that takes a toll on the graphics, but the Xiaomi 11i Hypercharge gives a stable 60fps in High graphics and Very High frame rates.

Additionally, the stereo speaker here is quite good. It can get plenty loud with a decent level of mids and vocals. It’s obviously not as good as the premium phones, but you should enjoy listening to music or podcast from this speaker setup.

Unfortunately, Xiaomi hasn’t included an impressive vibration motor on the 11i Hypercharge. It’s certainly good enough for most users, but this is one area where I would love to see companies take things to the next level by including flagship-tier motors. That’s because, from my experience, a high-quality vibration motor makes a big difference if you are typing or receive a phone call while riding a bike.

Similarly, given the price tag, I believe the camera is one area where Xiaomi’s mid-range phones don’t provide the best possible optimization and the same applies with this phone too. Here, you get a triple-camera setup at the back with a 108MP primary lens, an 8MP ultra-wide, and a useless 2MP macro sensor.

Starting off with the 108MP main camera, I found the daylight images to be pretty average given the price. At times, it can click some good pictures with boosted colors and the right amount of details, while at other times, it oversharpens the images and HDR doesn’t work very well either.

Plus, because of the big sensor size, it couldn’t focus close-up shots that easily.

Moreover, as expected from a mid-range phone, the Xiaomi 11i Hypercharge doesn’t have the fastest shutter speeds and an excellent image processor to capture well-detailed shots of moving subjects like your pets too.

What’s even more lackluster from this primary camera is that it oversharpens human subjects, especially under the portrait mode.

And it just doesn’t look good. Xiaomi’s product team should’ve addressed this via an update ASAP, but here we are.

As for the secondary 8MP ultra-wide-lens, it’s alright and nothing extra-ordinary.

But that’s me lowering my expectations given the average primary lens.

During lowlights, the 108MP camera on the Xiaomi 11i Hypercharge does a decent job to minimize noise levels and you can get even better shots with Night Mode turned ON. Then again, there’s a noticeable boost in contrast under this.

On the front, its 20MP camera performs better than the back cameras. The selfies look good and it doesn’t oversharpen the images like with the portrait shots.

Video-wise, it’s not the best phone for you if you take a lot of videos. It maxes out at 4K 30fps where the output is wobbly and jerky if there’s an insufficient amount of light. It seems they have turned off EIS here for some reason. Even the 1080p 60fps videos lack stabilization.

So, if you want to capture stable videos from this phone, you’ll be restricted to 1080p 30fps mode—both from the primary and ultrawide cameras. 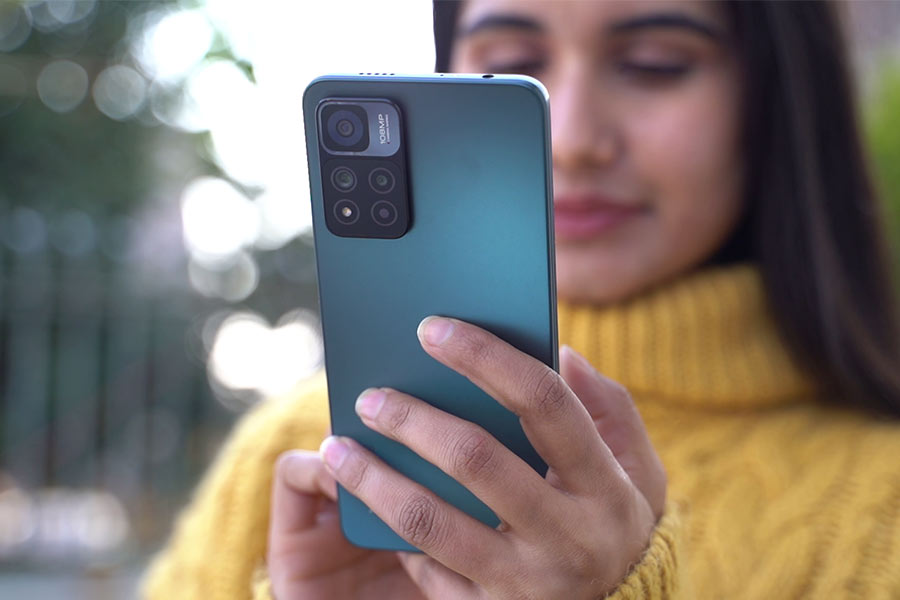 For selfie videos, the Xiaomi 11i Hypercharge lets you capture at up to 1080p 60fps where footages come off a little wobbly—although the results are relatively steadier at 30fps mode. Regardless, the video quality from the front camera is strictly average with quite a narrow field of view as well.

Overall, if you want a good camera experience, you should definitely skip the Xiaomi 11i Hypercharge. At a similar price, you can get Samsung’s Galaxy A52s or the iQOO 7, both of which offer way superior cameras.

Finally, let’s now talk about Xiaomi 11i’s best thing that I’ve saved for last—which is the battery and charging. Especially charging. Here, its battery life is nothing to write home about. If you are a heavy user, it will provide you with around 5 hours of screen-on time, which translates to a day’s worth of usage and nothing more.

But the charging tech that’s embedded here is just extraordinary.

As I mentioned at the beginning of the review, the 120W power brick that comes with the Xiaomi 11i Hypercharge fuels its 4500mAh battery from 0 to 100% in about 17 to 18 minutes in Boost mode, which puts it among the fastest charging phones out there. 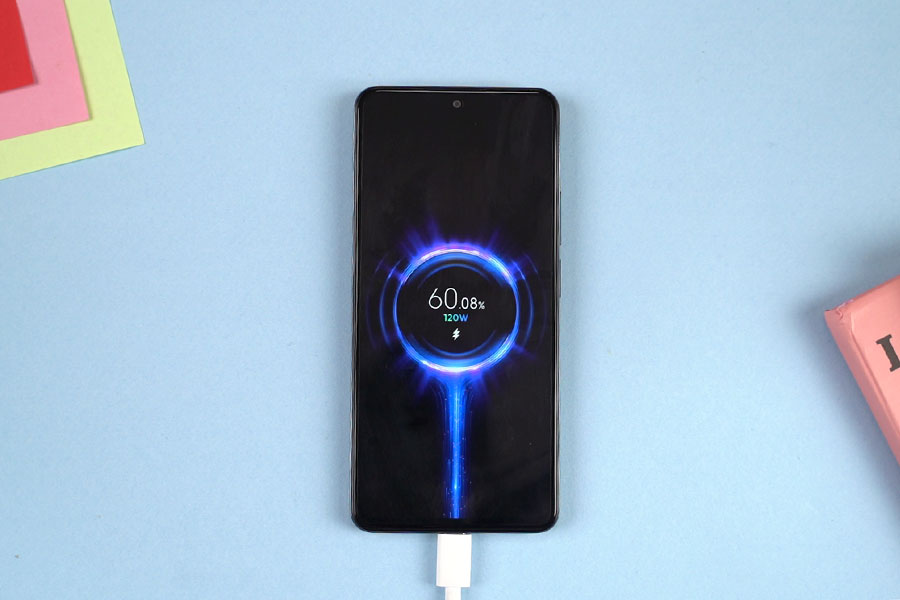 Here, the “Boost” mode is a bit susceptible to heat, so I turned it OFF. With this, it takes like 22 minutes for a full charge. Xiaomi also claims that they have taken industry-leading quality measures with the charger by acquiring TUV Rheinland Safe Fast-Charge Certification and over 30 protection features.

On top of this, the company says that the Xiaomi 11i Hypercharge’s battery retains up to 80% capacity even after 800 charge or discharge cycles, whereas other smartphones retain only up to 60% of battery capacity after just 500 cycles.

So, yes—this is pretty high-tech stuff for a midrange phone, which brings me to the end of my review of the Xiaomi 11i Hypercharge. Should you buy this phone? Sadly, the answer for me is a no and I have some valid arguments to back it up.

While I do appreciate Xiaomi bringing such an amazing charging technology to the masses, in doing so, the price of the product has gone too high. If it had a 67W or even a 33W charger, the overall experience would have remained the same. Exactly what the regular Xiaomi 11i delivers for INR 2,000 less.

But, that’s not only the reason why I wouldn’t recommend this phone. What other companies are offering at a similar price range is equally important.

You can get the Galaxy A52s instead that offers a better display and cameras—alongside a very similar performance. On the other hand, you can also pick the good old iQOO 7 for INR 29,999 from Amazon India, which comes with a more capable Snapdragon 870 chipset on top of a good display and camera setup.