Even with the wild boom in the e-commerce scene, the offline market still remains a major player when it comes to the electronics industry in numerous Asian countries. A vast majority of people still prefer the appeal of a physical store compared to the comfort of online buying. And if you take a closer look at the variation in the quality of products between the two markets, a weird and unsettling fact begins to take shape. Allow me to get a little more specific here. Also, this review of OPPO A52 is going to be a little different as we explore the problem in the company’s offline-centric smartphones.

A little bit of background into the offline market

You see, most smartphones offered exclusively in the offline stores are of objectively worse value when comparing it with some other devices geared towards the online market. Adding further insult to the injury is the fact that certain manufacturers have found immense success exploiting the seemingly less tech-conscious portion of buyers and selling them the said inferior products.

As a tech reviewer, it’s quite honestly infuriating. Now, I’m not rooting against brick and mortar stores altogether – no, no, no. Were the disparity between product offerings between online and offline markets negligible, this review would’ve turned a whole lot different. But since that’s obviously not the case, we’re throwing shade at such practices.

And one of the manufacturers that has a major foothold in the offline stores is OPPO. Prioritizing design & cameras in its product portfolio, we’ve been wowed by the company’s flagship devices for years. It is also pretty consequential in terms of smartphone fast charging technologies. Having said that, most of OPPO’s offline-targeted budget and mid-range phones exude a lack of motivation towards building a solid phone for its customers. 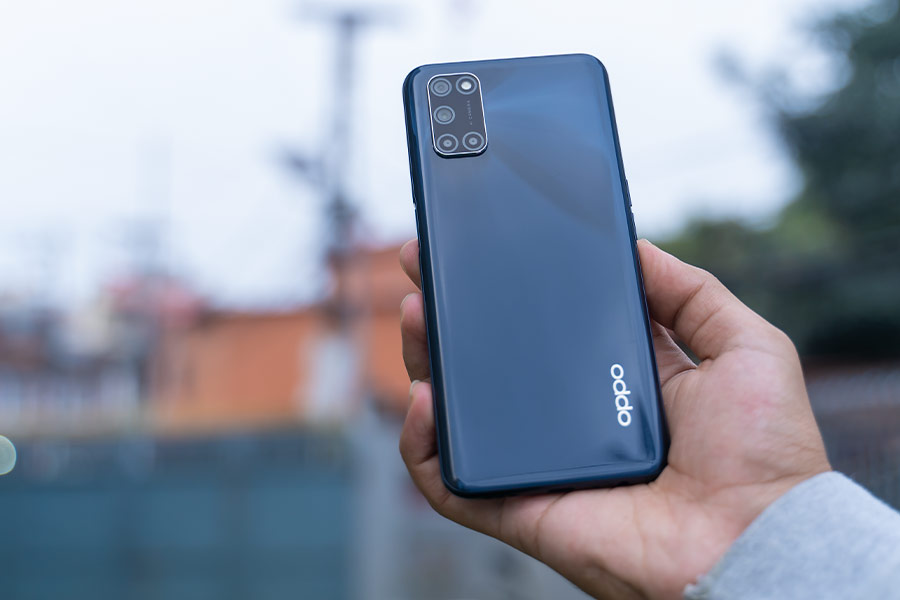 Recently, it launched the OPPO A52 which I’ve been using for some time now. To be completely honest with you guys, seeing how you can just tell it’s not a good phone with a quick glance at the spec sheet and the price-tag, I didn’t want to review this phone.

So naturally, I’d assumed that the phone must be selling terribly, as it deserves. To my surprise, I came to discover that the phone was doing really well in the offline market and exceeding sales expectations. What?! Because of this, I had to give it another try. For my review, I also had the Realme 6 for a side-by-side comparison since this and the OPPO A52 are priced similarly. 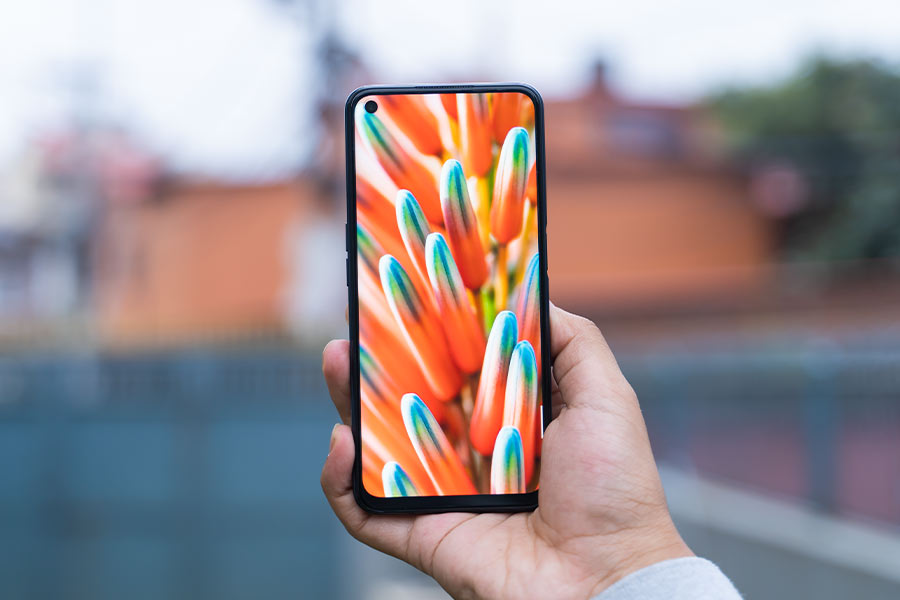 Besides the cost itself, these two phones share a kinda-sorta similar look as well. They both have an identical 6.5-inches FHD+ panel and the punch-hole cutout for the selfie camera is on the same side and is of practically the same diameter. OPPO A52 and Realme 6’s similarities extend to the form factor and build materials too.

The rear panel, on the other hand, explores the difference between the phones. As you can see, the cameras are arranged differently and the finishing texture itself looks contrasting between the two devices. I’d slightly lean towards the A52 for its a-bit more modern approach. Being an offline oriented smartphone, this better had a standout look.

Apart from the looks, the difference in the internal hardware is rather significant and makes the case for our disappointment. Here, the OPPO A52 is powered by Qualcomm Snapdragon 665 which is a poor performer for the price. Pair that with such a heavy Android skin that is the ColorOS 7, the OPPO A52 manages to become one of the worst values in terms of performance. With up to 6GB RAM onboard, its multitasking isn’t something exciting either. As a result, if you’re doing some kind of heavy multitasking or have some apps running in the background, the phone is just isn’t as smooth as you’d want. But OPPO A52’s weakness shines the best when it comes to gaming. Furthermore, I also noticed a touch latency issue on the phone. The already-incompetent chipset and the wacky touch latency issue means playing games (especially first-person shooters like PUBG) aren’t fun at all.

In comparison, you get a much faster MediaTek Helio G90T on Realme 6 which is further complemented by a smoother 90Hz display as opposed to the regular 60Hz on the OPPO A52. That’s a real shame considering how Realme is just another part of OPPO. To see such a wide variation in comparably priced products in daunting – even more, when you discover that people are actually buying such overpriced smartphones.

Other than the display and the performance, I found out that the cameras on the OPPO A52 are also much inferior to Realme 6, which itself isn’t the best for the price, to begin with. And remember, OPPO takes pride in its cameras.

Granted this is just another mid-range phone, the images were still unsatisfactory to what I’d expected.

The photos are lacking in detail and don’t compare to the ones from Realme 6 in almost every department like daylight, portraits, selfies, and even night mode.

Let’s take a brief pause from this series of complaints. Surprisingly, OPPO A52 has one saving grace in the form of a big 5000mAh battery. And that’s incomplete as well. You’re not getting the company’s signature VOOC charging technology which has been substituted with a common 18W fast charging instead. As a result, it takes about 2 and a half hours to fully charge the phone. Another cool feature on the phone is the dual stereo speakers which are pretty uncommon on mid-range smartphones.

OPPO A52 Review: The Buyer’s Perspective

Rounding it all up, the OPPO A52 makes little sense from a buyer’s perspective looking at its direct competition. This isn’t the company’s first hurrah at a terribly priced phone either – OPPO’s A-series of smartphones have always resonated with the same trend. Last year, I reviewed the OPPO A7 and A9 which both were way too overpriced and it’s sad seeing how the company doesn’t seem to have learned from its past mistakes.

Things keep getting worse though. As a tech reviewer who’s been doing this for quite some time now, it is really hurtful and unsatisfying to see how well such phones are doing in the market. OPPO A52 isn’t particularly an exciting device from start to finish which I believe I’ve sufficiently covered up to this part of the review. So, it’s not that weird seeing how little reviews of the device is out there on the internet. I’m not going to call any names but even with the simplest of YouTube searches, you can see how most tech channels have resorted to unboxing and first look instead of a detailed review.

Exploiting The Need For Free

Attracting viewers with a giveaway (which most likely is sponsored) to garner hype for a lackluster product is a pretty ingenious marketing scheme that companies like OPPO have come up with. I have to hand it to the company though, investing this little for marketing is exactly what a phone like OPPO A52 deserves. People will always seek out for free stuff and giveaways are an excellent way to circulate the word of mouth. And in the typical fashion, you won’t find A52’s review from the same giveaway organizers.

I mean, it’s their choice whether to come up with a separate review or not – there’s nothing wrong with that. But organizing a giveaway just to deprive your audience of your full review speaks volumes don’t you think? It doesn’t end there for OPPO. The OPPO A31 that launched a while ago is yet another fine example of an outrageously priced smartphone. In the hindsight, it is a cheaper yet overpriced version of the A52. In recent times, OPPO came up with A53 which excitingly, brings 90Hz smoothness but unfortunately on an HD+ display.

And The Cycle Continues

It’s single “advantage” (if you’d like to call it that) is horrendously overshadowed by all the other features packed into the device. OPPO A53 has downgraded silicon, an inferior camera setup, and with all these – you can instantly tell that the phone isn’t worth all your hard-earned cash. Once again, the giveaway-induced marketing strategy has been executed for this phone too. Exploiting the innate psychological attraction of people towards freebies, only to promote an objectively flawed product to the masses is just plain immoral if you ask me.

So I guess that’s it for our review, rant of the OPPO A52. The smartphone market is constantly evolving and so are the number of people making an educated purchase. I just wish we reached the point of saturation sooner than later so that brands like OPPO won’t profit off of the apparent illiteracy of the general buyers.