Since the lockdown, I have been testing the Realme 6 alongside the Galaxy M21. And boy has it impressed me! So, I won’t wait until the verdict to say to that, this is indeed one of the best gaming phones for its price, period. But there are few caveats in here, which I will be talking in this review of the Realme 6. So, let’s get started.

So, the first thing that differentiates the Realme 6 from its costlier Pro version is that the latter has more heft to it and feels more premium; as one would expect. The Realme 6 Pro has a glass back, and this one here comes bearing a plastic body and plastic frame. But don’t get me wrong, it does not feel cheap on the hands. In fact, if you compare it with the last-gen Realme 5 which had creaks and bends while pressing, this one is sturdier. The gradient Comet Blue variant that I have with me is eye candy for sure. Moreover, this one is splash resistant despite the lack of any official IP rating.

The home button is on the right side of the frame and it doubles as a fingerprint. And like I said in my Realme 6 Pro and Poco X2 review, I have grown into it. It’s fast, accurate, and resides in a comfortable position for unlocking.

Funny thing is, whenever I use my primary phone i.e. the Samsung Galaxy S20, I keep on pressing the side button to unlock these days. Anyway, a quad-camera setup lies at the back of the phone and the cameras protrude by a bit. And since I am not sure about the camera lens having any kind of protection, chances are you might get scratches if you don’t use a cover.

Realme does provide you with a silicon case insider the box, but I think you should get a decent back cover to make your phone look more stylish, and of course to protect the lens. The front has Gorilla Glass 3 protection, and if you remember the Pro version has Gorilla Glass 5.

And I like Realme including an inbuild screen protector factory sealed because neither of its competitors like Samsung or Xiaomi includes one. Overall, despite having a plastic back, the design isn’t any worse in my opinion; especially considering its price. And as long as you are getting better internals, I am fine with it.

You get a 90Hz panel in here, which I think redefines how we look at the budget phones. This 90Hz panel is a 6.5-inch 1080P IPS one with a trendier punch-hole cutout. And the display is damn good. It’s the same panel as we saw on its Pro version meaning the colors, contrast, and the touch responsiveness are great. That being said, the display has a slight bluish tint and the brightness is limited to 450nits. So, yes, sunlight legibility on a harsh sunny day was a little challenging for me. But, it’s not downright miserable. You can still check out texts and send messages. There is also some screen bleeding issue on the bottom chin and near the punch hole area. But you will only find it on closer inspection. That being said, with this 90Hz refresh rate panel, the overall UI on the Realme 6 is really really smooth. From scrolling through the apps to launching them, everything feels optimized here.

And the Realme UI has to be applauded here. The company has done a fantastic job of optimizing its custom skin to Android. Though I still think it is heavily inspired by Samsung’s One UI and OnePlus’ Oxygen UI, that’s not a bad thing at all. The multitasking tray looks very similar to One UI as well. And swipe down on the home screen brings notification center just like the One UI. Yet, I do see a room for improvement that Realme should be working on and the first thing that comes to mind is the icons. They definitely could use some re-work to look a little more modern and minimalistic in my opinion.

And the bloatware apps. Heavens! I have the Indian variant and it has a lot of bloatware. I uninstalled many of them and for the ones I couldn’t, I turned off their notification. So, it hasn’t particularly bothered me a lot, but an option to uninstall such redundant apps entirely would be great.

Now another good thing to like about the Realme 6 is its choice of the chipset. Here, you get MediaTek’s Helio G90T, which we first saw on last year’s Redmi Note 8 Pro. And we all know, it’s a damn good midrange chipset. It’s so good that in 2019, it has completely changed many users’ perspectives on MediaTek as a chipset manufacturer. 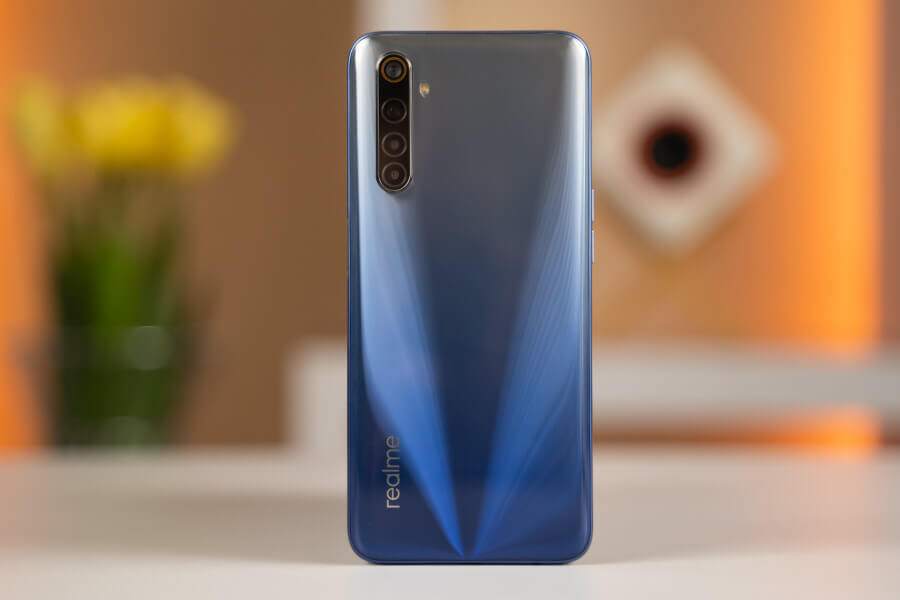 Combine that with the 90Hz display, you are looking at one of the fastest-performing budget phones in today’s date. Even with the lesser 4GB RAM variant I have, tasks like multitasking and apps opening is pretty darn quick. And trust me, I have installed over 40 apps in this unit. Yet, the overall experience has still been the same.

But what I have noticed is that the Realme UI aggressively closes the app to save battery if you don’t use that app for a longer time. So, that could be a little annoying for some, but again nothing of a deal-breaker for most buyers.

For gaming, you can play PUBG in smooth graphics and Extreme Frame rates which will yield in smoother 60fps gameplay. However, I was not able to enable the HDR option in my unit. 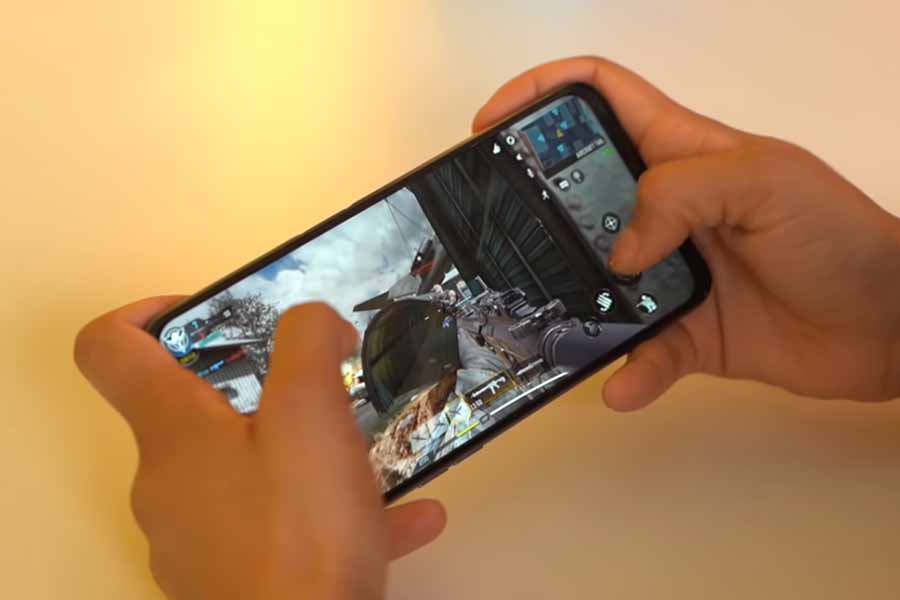 I also played Asphalt 9, COD, PES 20, and they all performed very well. However, there is some heating issue. If you play graphically demanding games for around 30 minutes or more, it does get warm on the back at around 40 degrees Celsius. Though it’s not very alarming, prolonged gaming sessions beyond 30 mins might result in your games being a little choppy at times.

Similarly, despite having the same 4300mAh battery, the endurance on the Realme 6 isn’t as good as the 6 Pro. That is most definitely thanks to the not-so-energy friendly 12nm MediaTek chipset. In comparison, with a more-or-less similar usage pattern, the 6 Pro lasted me for like a day & half, whereas the standard Realme 6 only lasted me a day.

On a positive note, what’s great is that Realme is still providing the Type-C port and a 30W charging, with charger included inside the box. It charges the phone in an hour, so that’s great.

So, everything’s been a “Solid A” so far. However, what’s pretty average on the Realme 6 is its cameras. You get a quad camera setup in here, as it has become a norm in budget and mid-range phones of 2020.

But, as Austin Evans said in his Realme 6 review, it’s not quad cameras, it’s like 2.5. That’s because the macro and depth sensor here is kind of rubbish.

The macro lens has a very little use case for me, and even if you try macro shots, it lacks details and come out blurry and washed out most of the time.

You just need to be very patient and have a good light to take a decent shot. And that right there, I’d say is not worth it.

The primary camera here is the 64MP Samsung GW1 sensor, which is the same one as the Realme 6 Pro. Oh ho, but don’t get too excited yet, because the optimizations are not the same here. It captures quite inferior photos compared to the 6 Pro.

Did Realme just do this in purpose to distinguish it from the Pro variant? I don’t know. Anyways, let’s dig in more.

The daylight 16MP pixel-binned images do have good details in them with sufficient contrast and a nice level of color accuracy. You can use the chroma boost option which increases the saturation and vibrancy while also improving the shadows to make the image pop out. But mind you, it doesn’t work in every scenario.

But for the price, it’s acceptable.

However, nighttime images are mostly unusable. They are muddy with very little details. The dedicated night mode doesn’t do any good either.

You get hazy images in the bright areas, which I think Realme seriously needs to look at.

Moving on, portraits are surprisingly good. Although there is a lack of proper edge detection in difficult areas like hair, its depth effect and blur make the images worthy of sharing on social media. You can also take a portrait of dogs and to my surprise, it did a very good job.

In terms of selfies, you get a 16MP shooter, but once again, it is inferior compared to its pro-version. It does capture acceptable images with good enough sharpness and dynamic range.

But, the skin tone of the selfies is pale and looks unnatural at times. Similarly, selfie portraits are good as long as you have a balanced light in the surroundings.

The video abilities of the rear camera aren’t any great either. Although you get a decent color and dynamic range, the videos aren’t properly stabilized even in 1080P.  Despite having EIS, both 30 and 60 fps videos at 1080P have some pretty gnarly wobbles. And as expected 4K @30fps will give you the worst stabilization and a recording that is pretty much unbearable to watch.

Similarly, you can record up to 1080 @30fps videos from the front camera as well, though it doesn’t have any stabilization. However, Realme has included slow-mo feature here and it works fine. Just check out this slow-mo video I shot.

What did I miss, hmm… oh, the Realme 6 has a 3.5mm headphone jack though its performance isn’t very good. The speaker audio is also mediocre but should be sufficient while watching videos. I also didn’t face any call drops or complaints in terms of call quality.

Over the years, the best midrange phone of the year title has been taken by the Redmi Note lineup. But as I’ve discovered during my review, the Realme 6 changes the midrange game altogether. Above all, I think Realme has nailed it with the Realme 6. Not only do you get all the basic stuff here, but premium features like the 90Hz display, 30W charging, is a testimonial to the best price to performance of the Realme 6, as I found out during my review.

Also, I strongly suggest you skip the cheaper Realme 6i as it comes with a much inferior chipset and cameras. Similarly, if you want better cameras, and battery life, investing similar amount on the Galaxy M31 isn’t a bad idea either. But, considering its price range, the Realme 6 is my pick for the best gaming midrange phone.