After a series of leaks and rumors, Poco F4 GT is finally official for the global market. The announcement was made during a virtual event where the company also unveiled its first earbuds and smartwatch. Anyways, here, we will walk through the specs, features, availability, and expected price of the Poco F4 GT in Nepal.

In a nutshell, the F4 GT is the same phone as the Redmi K50 Gaming Edition that went official in China a while ago.

Here, the smartphone has gaming aesthetics with an “X” shaped pattern on the rear panel and LED strips on the camera frame. The latter lights up in case of any notifications and can be customized through MIUI settings. Moreover, the F4 GT has a glass back, and the frames are made of metal. Like its predecessor, the phone retains tactile triggers on the right frame. The Poco F4 GT is available in three color options—Stealth Black, Knight Silver, and Cyber Yellow.

On the front, there’s a 6.67-inch AMOLED panel that supports a 120Hz refresh rate and 480Hz touch sampling rate. This is a 10-bit color depth screen with HDR10+ certification and Corning Gorilla Glass Victus protection.

It also supports a feature called 1920Hz high-frequency Pulse Width Modulation (PWM) dimming that reduces the discomfort caused by strobes on the eyes in low-brightness situations.

Powering the smartphone is a Snapdragon 8 Gen 1 processor paired with up to 12GB of LPDDR5 RAM and 256GB of UFS 3.1 internal storage. The phone also packs LiquidCool Technology 3.0 which features 4,860mm2 dual vapor chambers that ensure stability and peak performance in intensive workloads.

In terms of software, the F4 GT comes pre-installed with MIUI 13 for POCO based on Android 12. Similarly, fueling the device is a 4700mAh cell that supports 120W fast charging. 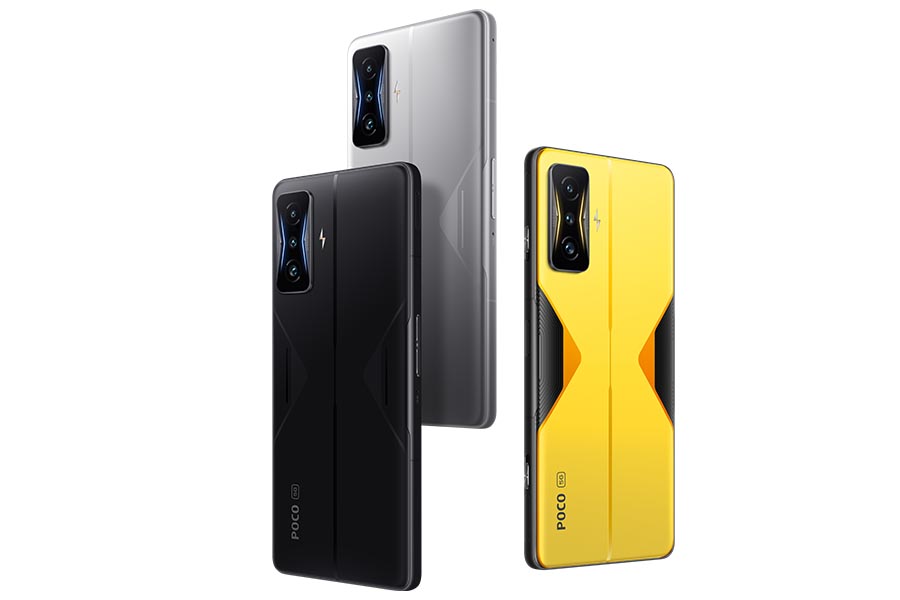 Camera-wise, there’s a triple camera setup on the rear led by a 64MP Sony IMX686 primary sensor. Accompanying this is an 8MP ultrawide with a 120º field of view (FOV) and a 2MP macro sensor. For selfies, there’s a 20MP Sony IMX596 sensor.

Rest of the specifications

Aside from that, the F4 GT is outfitted with a CyberEngine super wideband X-axis linear motor for haptics. The audio, on the other hand, is handled by quad-speakers that support Dolby Atmos, Hi-Res Audio, and Hi-Res Audio Wireless. Moreover, the connectivity option includes WiFi 6E and Bluetooth 5.2. Despite having an AMOLED display, the F4 GT includes a side-mounted fingerprint scanner for biometrics.

Poco F4 GT is launched at an asking price of EUR 599 for the base 8/128GB variant and EUR 699 for the higher 12/256GB model. However, as an early bird offer, the phone is available for EUR 100 less in both memory configurations. We expect the price of the Poco F4 GT to start at NPR 65,000, if and when it launches in Nepal.