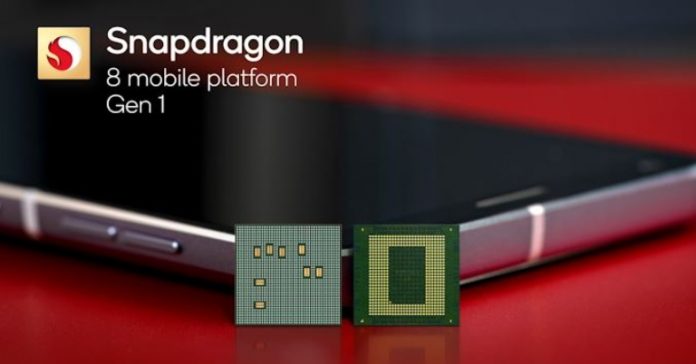 A while ago, MediaTek announced the world’s first mobile chipset based on the 4nm process, the Dimensity 9000 5G. Qualcomm has now joined this race with the all-new Snapdragon 8 Gen 1. So, let’s find out what upgrades it brings over the Snapdragon 888/888+.

Before moving forward, let’s look at some of the adjustments Qualcomm has made in preparation for the debut of its new flagship mobile SoC. The company recently announced that “Snapdragon” would henceforth function as a standalone brand—meaning the chipsets will lack the Qualcomm prefix from now on.

Furthermore, to simplify naming—and because Qualcomm is simply out of numbers, having reached 888, 780, or 695—the new flagship will be referred to by generations. However, it’s still unclear what the new iterations of 7,6, or 4-series of silicons will be dubbed.

Anyways, the Snapdragon 8 Gen 1 is manufactured under Samsung’s 4nm process. It uses the new Arm v9 architecture with one Cortex-X2 Prime core running at 3.0GHz. Likewise, there are three Cortex-A710 (2.5GHz) and four Cortex-A510 (1.80GHz) cores. Moreover, the 8 Gen 1 supports LPDDR5 RAM at 3200MHz with a memory bandwidth of up to 51.2GB/s. Likewise, it has 6MB of L3 cache and 4MB of system cache. And as per Qualcomm, the CPUs no longer have access to the system cache, which improves DRAM latency.

On the other hand, Dimensity 9000 tops the race with newer LPDDR5x RAM support, and 8MB L3 + 6MB SLC cache, however, the DRAM latency isn’t that great here. But before making any judgments, we must wait and see how both chipsets perform in real-world scenarios.

On to the GPU front, the unnamed Adreno GPU here reportedly offers a 30% faster rendering performance while consuming 25% less power than Snapdragon 888. It also offers a new GPU control panel for fine-tuning how games will run on smartphones.

Moving on, this chip has a new X65 integrated modem that is compatible with mmWave and sub-6GHz 5G spectrum. It follows the most recent 3GPP Release 16 standard and offers a peak speed of up to 10Gbps.

Moreover, the Snapdragon 8 Gen 1 brings an 18-bit ISP which the company is calling “Snapdragon Sight”. As per Qualcomm, the new ISP allows it to process 4,096 times more component data than 888’s 14-bit ISP. The 8 Gen 1 will also have the ability to capture photos at 3.2 gigapixels per second. For the videography, you can now shoot at up to 8K resolution with HDR 10 Plus and 18-bit RAW videos. The chip’s enhanced AI capabilities improve auto-exposure, auto-focus, and auto-face detection. It also contains a specific “bokeh engine” for adding portrait effects to 4K videos, as well as an “ultrawide engine” for de-warping and removing chromatic aberrations from pictures.

Aside from that, there’s a fourth ISP in the sensing hub on the SoC that delivers an always-on camera experience. Qualcomm will explore what developers can do with it, such as unlocking your phone using face recognition without touching or waking it. However, there are some security concerns as well.

As per Qualcomm, the seventh-generation AI engine on 8 Gen 1 is four times faster and up to 1.7 times more power-efficient than Snapdragon 888.

Multiple makers have already revealed their next phones that will use this chipset. Xiaomi CEO Lei Jun confirmed that the upcoming Xiaomi 12 will be powered by the 8 Gen 1 processor, which will also debut in the Realme GT 2 Pro.

Similarly, the successor to Oppo’s Find X3 Pro, Moto Edge-series smartphones, OnePlus 10 Pro, and at least one ZTE phone will be powered by Snapdragon 8 Gen 1 according to the latest development.