Ray-Ban has just announced its first smart glasses, Ray-Ban Stories, in partnership with Facebook. Here, we’re taking a look at the specs and features of the Ray-Ban Stories by Facebook.

Last year, Facebook confirmed the rumors that it was working on smart glasses. The company took the stage at last year’s Facebook Connect event to announce its partnership with Ray-Ban for the same.

Ray-Ban Stories is the first product to come out of Facebook’s multi-year partnership with EssilorLuxottica, the parent company of Ray-Ban. Here, Facebook has been smart enough to launch the products under Ray-Ban branding, given how its previous ventures like Facebook Phone and Portal TV have failed.

Also, one can easily relate the “Stories” in “Ray-Ban Stories” to the photo-sharing format popular in today’s social media. Stories were first started by Snapchat, and the company has its own lineup of smart glasses, similar to the one Facebook recently launched. However, it is already in its third generation.

Talking about Ray-Ban Stories, there are 20 different design choices, including Ray-Ban classics like Wayfarer, Wayfarer Large, Round, and Meteor. Similarly, you can choose between Clear, Sun, Transition, and Prescription lenses.

It comes with a dual-camera arrangement with 5MP cameras on the left and right sides, capable of recording 30fps videos for up to 30 seconds. Similarly, two LEDs on the front light up to alert those close that the glass is recording.

The glasses also feature open-ear speakers that let you listen to music and even take calls—with further assistance from the three-microphone array and noise suppression algorithm.

As for controls, Ray-Ban Stories features a touch control on the side that you can use to play/pause music, control volume, take photos and start a recording. You can even take photos and videos using the Facebook Assistant. 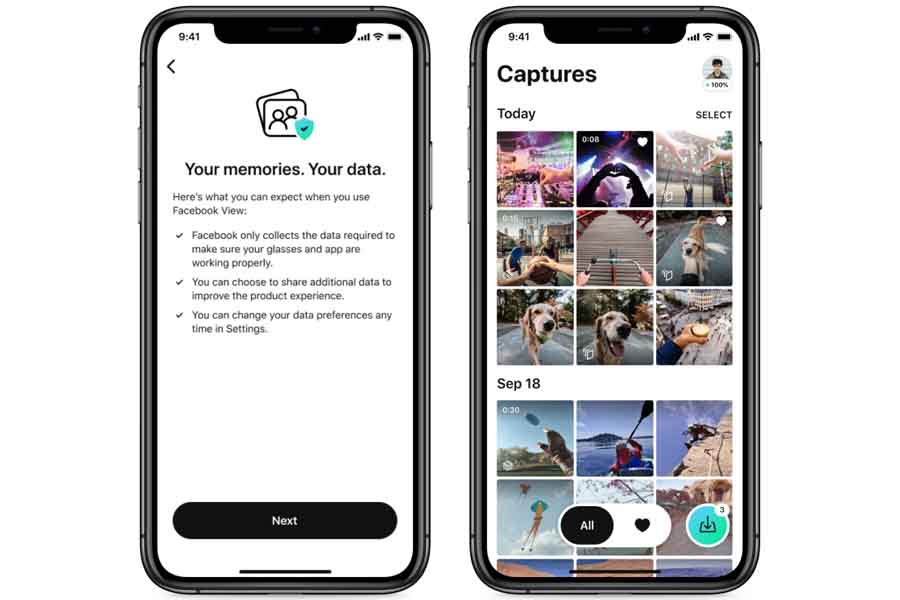 Ray-Ban Stories pairs with your smartphone using the Facebook View app. The app is available for both Android and iOS. Here, you can import, edit and share photos and videos from the smart glass and share them.

Given the history of Facebook’s handling of user’s data, it’s hard not to be skeptical of the Ray-Ban Stories. Still, Facebook says that users are in full control of their data. The smart glass can only be paired with one account at a time. Facebook also says that every photo and video is encrypted and accessible only with the user’s log-in credential.

Similarly, you can choose to store, view, and delete any requests made to Facebook Assistant. There is also a power button that you can use to turn the device off when not in use.

In addition, there are the aforementioned Capture LEDs to notify people that they’re being recorded. However, one can easily block it with a taping of some sort. Facebook says tampering with the Capture LED results in a violation of the contract. But it is still not clear if and how the company will be tracking such incidents.

The price of Ray-Ban Stories by Facebook starts at USD 299. It is currently available in countries like the US, Australia, Canada, Ireland, Italy, and the UK.