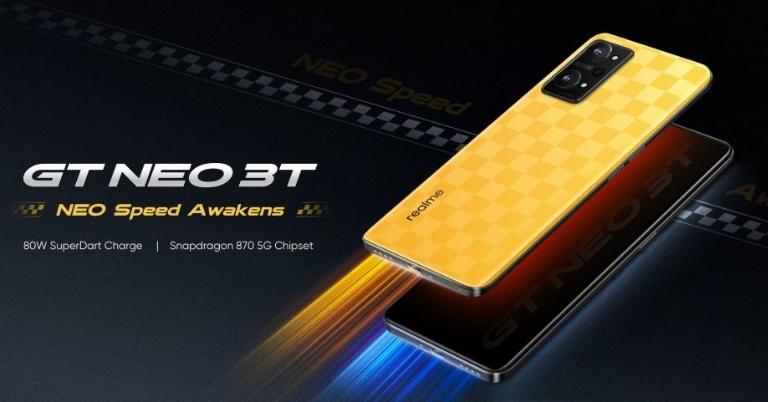 Realme launched the GT Neo 3T alongside the global launch of the GT Neo 3 back in June. The phone is It is pretty similar to the GT Neo 3, but swaps out the Dimensity 8100 for a Snapdragon 870. Check out the key specs, features, availability, and expected price of the Realme GT Neo 3T in Nepal.

The Realme GT Neo 3T features a unique checkerboard design in its yellow color variants. On the contrary, the black shade sports a matte black finish. The handset measures 162.9 x 75.8 x 8.65mm and weighs around 194.5 grams. On the front, it flaunts a 6.62-inch FHD+ E4 AMOLED screen with a 120Hz refresh, up to 1000Hz touch sampling rate, and 100% DCI-P3 color gamut. There is a punch-hole cutout on the top left for the selfie camera on the screen. Visibility under harsh sunlight should be no issue since it has a peak brightness of 1,300 nits.

Moving on, the Realme GT Neo 3T is powered by a 7nm Snapdragon 870 processor paired with 8GB of RAM and 128/256GB internal storage. The device comes preinstalled with Android 12 OS and Realme UI 3.0. You can also use the virtual RAM extension feature to add up to 5GB of additional RAM. The rear camera bump houses a 64MP primary sensor, an 8MP ultrawide sensor, and a 2MP macro sensor. This is accompanied by a dual-LED flash that helps to illuminate the surrounding scene to capture brighter images. Like the GT Neo 3, the front selfie shooter is a 16MP sensor.

It features 5G, Bluetooth 5.1, and Wi-Fi 6 for connectivity. For navigation, dual-frequency GPS is also included. Moreover, it has a stereo speaker setup with Dolby Atmos for audio but lacks a 3.5mm headphone jack.