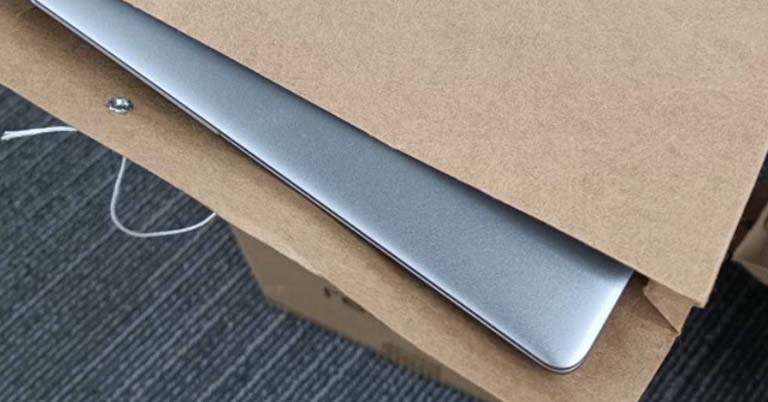 What started as Oppo’s answer to Redmi has now become one of the fastest-growing smartphone brands in the world. Realme is going even further by tapping into the accessories and AIoT market. Last year, the company found success with audio accessories, wearable, and even smart home electronics. And now, Realme is teasing its first laptop.

Madhav Seth (CEO: Realme India, Realme Europe) took to this Twitter handle to tease the company’s first laptop. His tweet contains a sneak peek of the notebook. There is a cryptic message accompanying the photo, which reads “Hello World!” when decoded. In case you don’t know, Hello World is the first program one learns when introduced to a new programming language. Here, it simply signifies Realme’s entry to a new product category. The laptop will be the latest addition to Realme’s growing AIoT portfolio.

According to an exclusive leak by Android Authority, the laptop will be called “Realme Book”. Plus, it looks to be heavily inspired by Apple’s MacBook lineup.

The leaked images reveal an aluminum body, thin bezels, and a Realme branding on the bottom bezel. Realme Book is also speculated to feature a tall 3:2 aspect ratio.

Realme’s intentions were clear when it conducted a laptop survey last month. The survey asked users about their laptop preferences. The post on the official forum mentioned that the survey came to be because of users’ requests. Through the survey, Realme was trying to do a market analysis. The questionnaire asked users about the most and the least important features in a laptop and the workload for which the participants use their laptops. It also asked people if they plan to upgrade their laptops in the coming months, along with the price they are comfortable with.

Deductions from the questionnaire

Based on the questions asked in the survey, it is safe to say that the Realme laptop will be a notebook priced between INR 30,000 and INR 50,000. It could easily be an entry-level Ultrabook that will compete against Mi Notebook 14 lineup, which is available in the same price range. After all, Realme going against Redmi should not be a surprise to anyone.

Brands like Redmi, Poco, and Realme have been offering their products at competitive prices because of their shared resources for R&D with their sister companies. However, none of the brands under the BBK Electronics umbrella (Oppo, Vivo, OnePlus) have launched laptops yet.

Thus, Realme Book will be a product designed from the ground up. Alternatively, it could also be partnering with an ODM (Original Design Manufacturers) to keep the cost down.

Back in January, Indian leaker Mukul Sharma tweeted that Realme could launch a laptop in June 2021. And with the Android Authority leak, it looks like the company is ready to unveil the laptop during the global launch of Realme GT 5G (June 15).