Realme has just expanded its Narzo lineup in Nepal with the launch of Narzo 50A Prime. In this article, we will discuss the key specs, features, official price and availability of Realme Narzo 50A Prime in Nepal.

The moniker makes the Narzo 50A Prime sound like an upgraded version of the Narzo 50A already in Nepal. However, the phone actually builds on the Realme C35 with a new design and a chip underneath.

Realme Narzo 50A Prime features a 6.6-inch LCD screen with a waterdrop notch for a selfie camera. It’s an FHD+ panel with a peak brightness of up to 600 nits. The phone refreshes at the standard 60Hz but boasts a touch sampling rate of up to 600 nits.

Over on the back, Realme Narzo 50A Prime keeps the Kevlar-inspired textured design of the Narzo 50 and 50A, but with a redesigned camera bump. The phone measures 8.1mm in thickness and weighs around 192.5 grams. Realme offers the phone in two color options: Flash Black and Flash Blue. Under the hood, Realme Narzo 50A Prime is powered by the Unisoc Tiger T612. The processor is built on a 12nm processor and features 2 Cortex-A75 and 6 Cortex-A55 cores; all clocked at 1.8GHz. Realme has paired the processor with 4GB of LPDDR4X RAM. You can choose between 64GB and 128GB of UFS 2.2 storage. There is also an option to expand the memory using a MicroSD card slot.

Realme Narzo 50A Prime’s redesigned camera bump is home to a triple camera setup. The 50MP primary sensor is accompanied by a 2MP macro and a 2MP portrait lens. Unfortunately, there is no dedicated ultrawide module. On the front, you can find an 8MP selfie shooter.

You can shoot 1080p/30fps videos with the rear camera, whereas the selfie camera maxes out at 720p/30fps.

Despite its thin profile, Realme Narzo 50A Prime packs a 5,000mAh battery inside, which the company claims can last up to 17.2 of online video playback on YouTube. Then we have support for 18W fast charging for a quick refill. There is a physical fingerprint scanner on the side for biometrics. The phone boots on Android 11-based Realme UI R Edition. 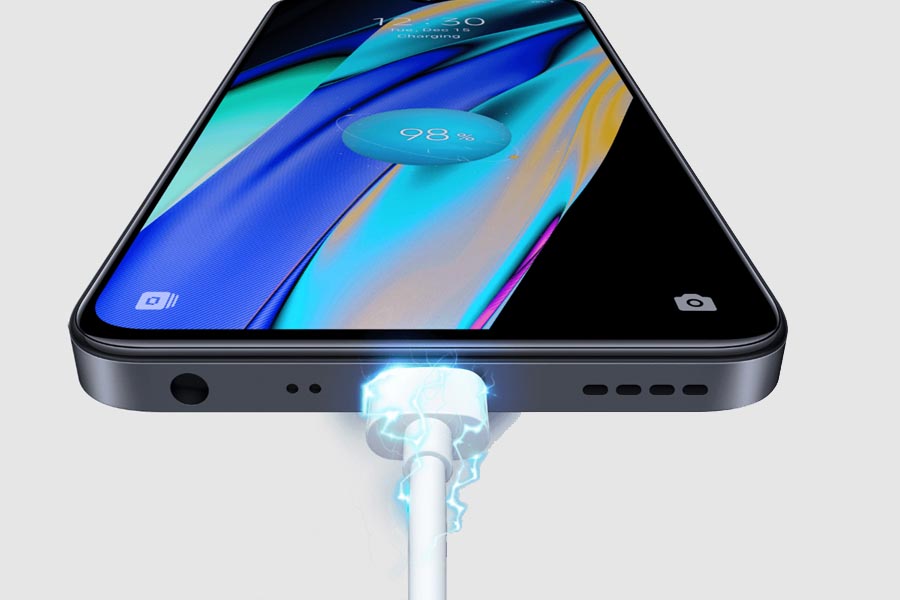 Realme Narzo 50A Prime Price in Nepal and Availability

Meanwhile, check out our review of the Realme GT Neo 3.