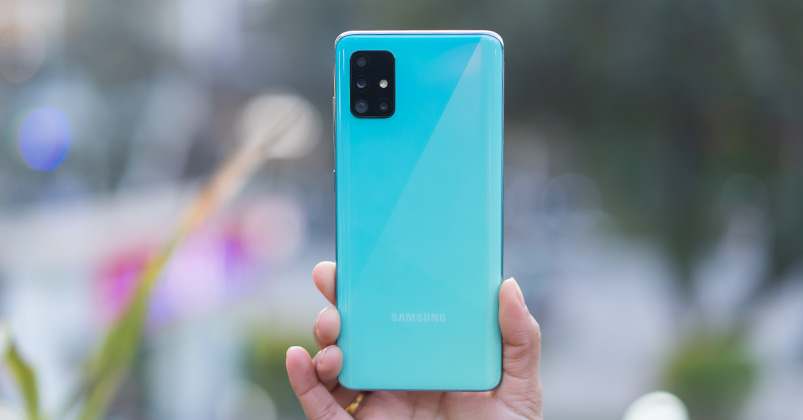 If you remember, last year’s Galaxy A50 was one of the highest-selling midrange phones of 2019. The company had already updated it with the A50s but disappointingly, it came with very few and insignificant upgrades. And now, we have another phone under the A50 lineup – the Galaxy A51.

This time around though, there are quite some interesting improvements. However, the competition has gotten fiercer than ever in 2020, coming from brands like Realme and Redmi. I have used the Galaxy A51 for a long-time, and here is our detailed review.

Compared to A50, I found some major improvements with the Galaxy A51. First, the 3D-holographic cut patterns look amazing. And in terms of color choices, I have the white and the blue variant with me and both look very soothing to the eye. Aesthetically, you get all your buttons on the right while the left side is reserved for SIM tray, and down below, you get a Type-C port, a speaker, and our beloved headphone jack. The cameras at back also have a new look, similar to that of Samsung’s Galaxy S20 series. You still get a plastic back & frame in here, but what I really like about the phone is how light it is (172gms). I recently reviewed the Poco X2 and Realme 6 Pro, and they were all boxy and heavy, whereas the A51 feels really thin, light, and comfortable to use. So overall, I liked the design and the build of the phone, if not for the plastic back & frames.

Display-wise, it has a signature Samsung AMOLED panel. And the centered punch-hole cutout makes the A51 aesthetically pleasing. Talking about the panel itself, it is a big 6.5-inches display with a quite cinematic 20:9 aspect ratio.

And yes, the display quality is excellent as we’ve come to expect from Samsung. Here, the colors are great and so is the contrast ratio. Additionally, the phone gets a decent amount of brightness as well, with almost no compromise on visibility even when you’re outdoors, in a well-lit environment. 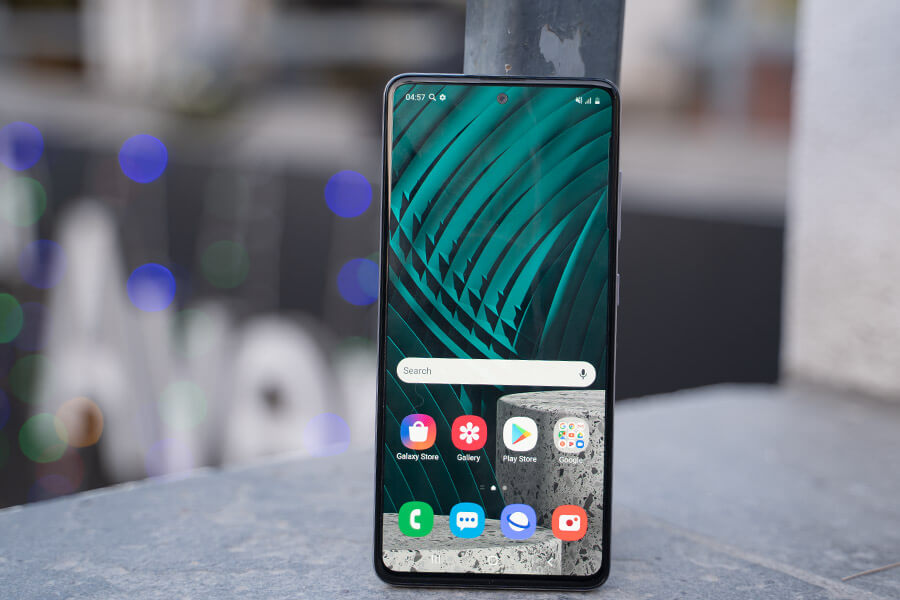 Moreover, the touch response on the Galaxy A51 is fantastic. Although it is still a regular 60Hz panel, navigating through the phone is quite swift. Just for comparison, I tried it out against the Realme X2 which has an AMOLED panel as well.

However, the superiority of A51 was quite apparent upon rather a quick inspection. However, there is the rather dated Corning Gorilla Glass 3 protection on the phone so I did manage to get minor scratches on it.

The Galaxy A51 has a quad rear camera setup. There’s the 48MP primary camera, a 12MP ultra-wide-angle lens, a 5MP depth sensor, and finally a 5MP macro sensor.

Talking about the primary camera, as we’ve usually seen on Samsung phones, the A51’s 12MP pixel binned shots have an incredible amount of details with decent dynamic range, and punchy colors as usual. Compared to the OPPO F15, I was quite surprised to see how the Galaxy A51 held its fort. It produces quite eye-catching colors, especially the sky in comparison.

Getting to the night time images, it’s just about average. So, I had to use the night mode to get a usable image. But what’s definitely distinguishable are the images from the ultra-wide-angle lens. Here, the A51 takes the crown as it’s got the better of everything – from width to detail to the dynamic range to colors.

Talking about macro shots, like I’ve been saying in many of our phone reviews, it’s just a gimmick and is way less practical. In the case of A51 as well, it’s not very useful, though you can get acceptable images with good lighting.

The A50s had good portrait imaging capability and the same goes here with the Galaxy A51 as well. The edge detection in portraits is fairly good. Under good lighting, you can get some truly amazing portraits like this one here. The camera does smoothen the subject’s skin a little bit, but the end result is good I must say.

Similarly, the regular and portrait selfie images are decent on the Galaxy A51 with better colors, details, and sharper focus.  The software-based portrait selfies don’t have the best edge detection but look good for what its worth.

Getting on to the videos, though it supports 4K recording, it is limited to 30fps and lacks stabilization. On the contrary, you still get quite stable videos in 1080p videos. Similar to the photos, the videos have quite good colors and dynamic range too. And as expected on Samsung phone, you also get the super steady mode, slow-mo, and super slow-mo video modes.

Talking about the software version, the Galaxy A51 runs on the latest Android 10 with One UI 2.0 on top. The difference between the original One UI 1.0 to this version of One UI is great. Though there aren’t many visual changes, I did notice that it is a lot smoother.

The UI is so easy to get used to and everything is just there, so easily reachable. It is actually designed for huge phones. And I must say that I really like the changes to it from the previous version of One UI. The transitions seem so much faster and smoother and the layout of items has been managed differently and for good. The camera UI looks better. Overall, it looks more colorful and managed. I have always complained about One UI being slow on budget and mid-range phones and I am happy that Samsung finally seems to have listened! Having said that, there is still a slight hint of lag while navigating through apps and multitasking. Comparatively, it’s just not as swift as say the one in the POCO X2 or Realme X2. And It’s definitely because of the same-old Exynos 9611 chipset that’s powering it, which is just a slight improvement over the Exynos 9610 on the original Galaxy A50.

What’s even non-acceptable is how Samsung’s new Galaxy M21 with much less going price, shares the same chipset to the A51. We’ve been consistently complaining about the company’s chipset selection in their A-series devices and at this point, I am really tired of. I mean how inconsiderate can you get?

The Galaxy A71 we reviewed a couple of weeks back has the Snapdragon 730 and its performance is, let’s say, good. If you think about it, A51 should be the one powered by SD 730 while the A71 could’ve gone with an even better chipset.

When it comes to gaming, the performance is similar to that of the last year’s A50. Graphic intensive games like PUBG runs at acceptable 40fps mark in smooth graphics and ultra frame rates, while COD is playable on high graphics and high refresh rate. But as you push the settings higher, you get a ton of stutters & lags to a state of not being able to enjoy the gameplay. Also, the phone got a little warm near the camera module when gaming for a little while. Therefore, with its underperforming SoC, the Galaxy A51 is definitely not for the gaming-centric audience.

In terms of memory, there’s either 4, 6 or 8GB of RAM with 64 or 128GB of storage. The one I have has a 6/128GB configuration, with a dedicated microSD card slot for storage expansion.

As for the in-display fingerprint sensor, it is much faster and accurate than its predecessor and with the recent update, it’s gotten even better. But Despite this, it is nowhere near comparable to what the competitors are offering with their larger and faster sensor. But at the end of the day, it gets the job done and you’ll get used to it pretty soon. Likewise, the software-based face unlock is okay too but still isn’t the fastest.

The 4000mAh cell in fact yields similar endurance to the Galaxy A50 & A50s, and gives a solid one-day battery life. In my time with the phone, it gave me around 6 hours of screen-on-time which consisted of around 2 hours of binging YouTube, about an hour of gaming, and over an hour of social media usage.

Though the endurance itself is amazing, the charging… not so much. You’re still stuck with 15W fast charging, which now can be seen on budget Samsung phones. So, it would have been much nicer if Samsung had included a 25W charging technology like thy Galaxy A71. With the 15W charger, it takes about 1 hour and 50 minutes for the Galaxy A51 to get charged from 0 to 100%.

The audio quality on this phone is okay-ish too. It has a mono speaker that gets the job done, but I think Samsung should include a stereo setup at least on their upper A-series device to make it more value-packed and distinguish its A-series from M-series. Similarly, there is no problem with the 3.5mm headphone jack. And even in terms of call quality, the audio is loud and clear.

In conclusion, I got in a dilemma as to how I should give a verdict to the Galaxy A51. While reviewing it, I kept on asking myself who is this phone for? And I think it’s perfect for casual smartphone users, who don’t give much emphasis on performance & gaming. Someone like my sister, who doesn’t play high-end games, and just wants a stylish phone with a great camera and display, because she binges a lot of Amazon Prime contents on her phone.