We have been writing about the Samsung Galaxy J7 (2017) from as early as February 2017. First, we shared about its design render video and the expected specs of the phone. Then we shared its press image leak and WiFi Certification release two months ago. That WiFi certification didn’t share much other than the phone will be running on Android 7 Nougat. But the latest leak of the phone reveals all of its Specs. The Galaxy J7 2017 recently got spotted in GFXBench as “SM-J730” and here’s everything you need to know about the phone. 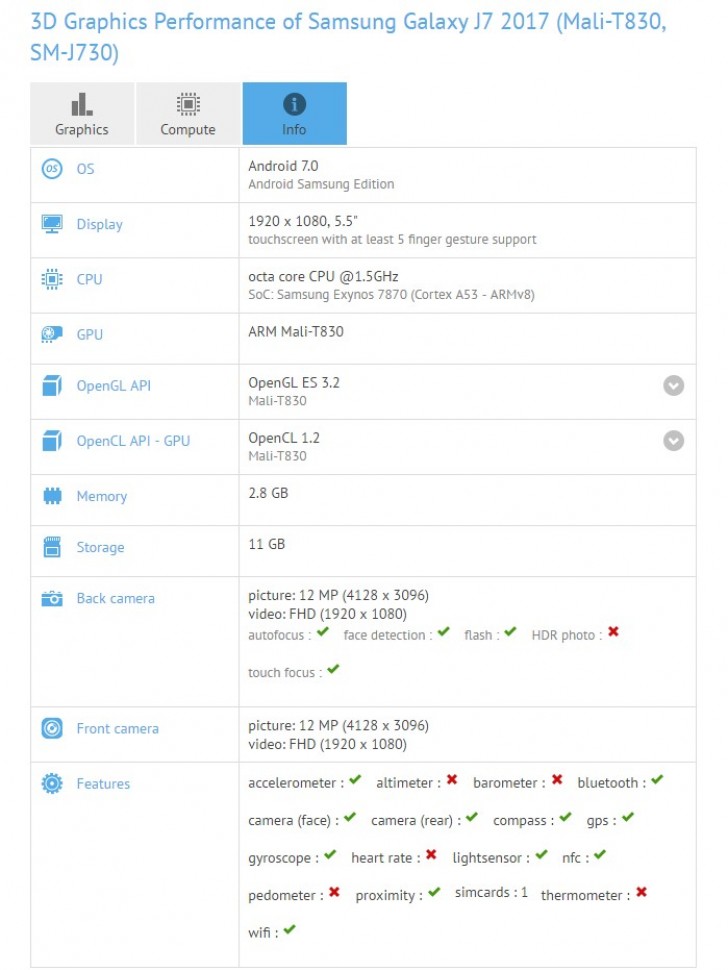 The next iteration of J7 will have noticeable upgrades as compared to last years J7 and the one before that. The screen size of 5.5ich is same as those two J7 but will have a greater resolution of 1920*1080 pixels. The phone will be running on the latest Android 7.0 Nougat. It will be powered by Exynos 7870, an Octa-core CPU clocked at 1.5GHz. Another upgrade the phone will be having is in the RAM department since it’ll have a 3GB RAM. So, the phone will have a configuration identical to that of current J7 Prime as this too will come with base storage of 16GB.

The another upgrade the phone will have is in the selfie camera department as it will sport a 12MP camera on the front. The Back Camera too will be of 12Megapixels. Both the cameras will shoot videos of up to 1080p. The phone seems to be coming with all essential sensors except one and that’s the fingerprint sensor.

No information about the phone’s pricing has yet been revealed. But the phone is likely to be released anytime soon. So, once the phone gets officially launched. The phone will certainly make to the market of Nepal after few months from its initial release.

This leak on Samsung Galaxy J7 2017 came with both the Good News and the Bad News. The Good News is it has Full HD Screen, 12MP front shooter, 3GB RAM and the Nougat. The Bad News is it comes with 16GB of onboard storage and doesn’t sport a fingerprint scanner. So despite its these two major flaws, if the phone gets the pricing right, it has some good chances to do well in the market just like its predecessors, if not more.