Samsung has increased the price of Galaxy M32 in Nepal following the government’s decision to hike excise duty. So let’s take a look at the specs, features, latest official price in Nepal, and availability of the Samsung Galaxy M32.

Here, the Galaxy M32 features a prismatic design at the back. This is quite similar to the one we’ve seen in Samsung’s other ‘M’-series phones like Galaxy M12. However, there are a few design distinctions between the two phones. Upfront, the phone houses a 6.4″ Super AMOLED screen with an Infinity-U notch for the selfie camera. 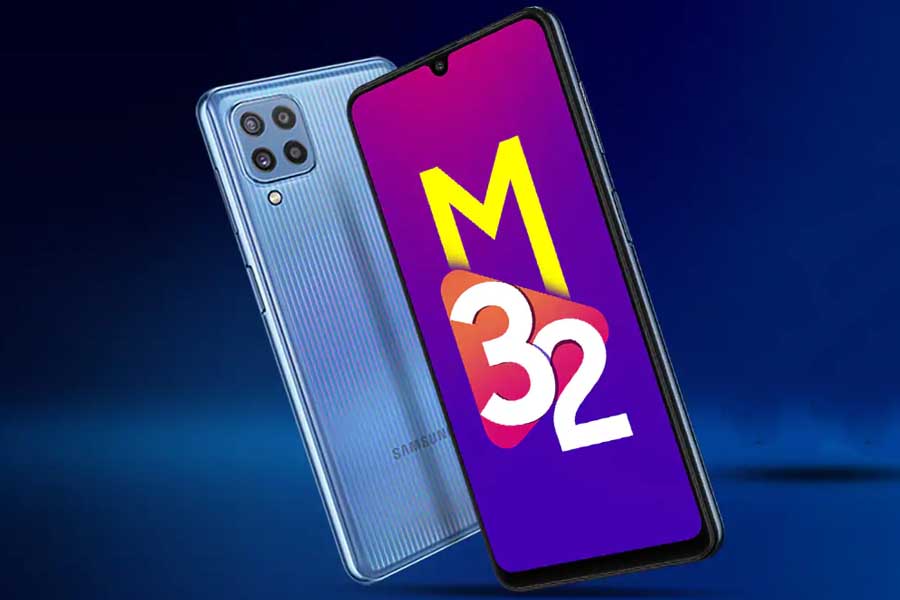 While other manufacturers have shifted to delivering punch-hole cutout screens on such mid-range phones, Samsung’s decision to stick to the (almost) primitive notch design is a little disappointing.

Anyway, this Full-HD display boasts a 90Hz refresh rate and up to 800 nits of peak brightness under High Brightness Mode (HBM). Although it’s an OLED panel, you’ll find a side-mounted fingerprint sensor here for biometrics.

On the performance front, Galaxy M32 is powered by MediaTek’s Helio G80 chipset. This has been paired with either 4 or 6GB of RAM and up to 128GB of internal storage. One can also upgrade the latter using the dedicated microSD card slot in the SIM tray. As expected, the phone runs on Android 11 with Samsung’s One UI Core 3.1 on top.

Moving on to the camera side of things, Galaxy M32 gets a 64MP quad-camera array at the back. Following this is an 8MP f/2.2 ultrawide camera with a 123º Field of View (FOV), and a couple of 2MP sensors for close-up macro and portrait shots. In the aforementioned notch sits a 20MP f/2.2 selfie shooter. Yet, this is a direct downgrade from its predecessor, the Galaxy M31, which packed a 32MP front-facing camera instead. Also, Samsung has restricted Galaxy M32 to recording just 1080p/30fps videos from both front and back cameras. To compare, the M31 is capable of 4K/30fps recordings.

If all of this sounds super familiar, congratulations—you’ve cracked Samsung’s code. The “new” Galaxy M32 is nothing more than a repurposed Galaxy A32 4G in disguise. All it introduces is a couple of differences including the design language, battery size, and relatively downgraded cameras.

Talking about the battery, Galaxy M32 gets its fuel from a massive 6000mAh cell. With this combo of a big battery and a Super AMOLED screen at the helm, Samsung is nicknaming this phone as a “Binge Monster”. To further validate this title, it also brings a 3.5mm audio jack and Dolby Atmos Audio. Even though the phone supports 25W fast charging, M32 only ships with a 15W power adapter inside the box. As a result, getting it from 0 to 100% should take at least a couple of hours from the in-box charger.