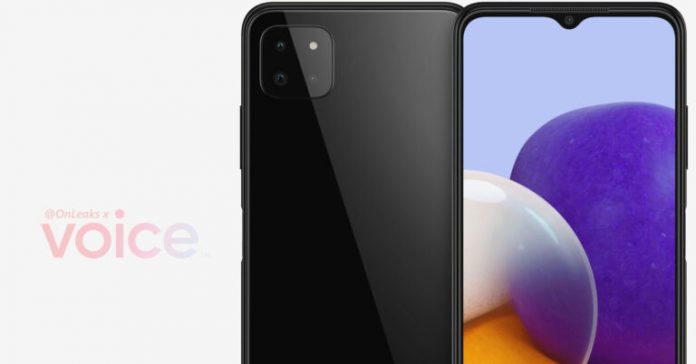 Samsung recently launched its cheapest budget phone, the Galaxy A32 5G. And now, that title may go to the upcoming A22 5G whose renders have hit the web. Here, we will cover the rumors, specifications, and features of the Samsung Galaxy A22 5G.

Famous tipster Steve Hemmerstoffer (@Onleaks) first leaked the high-quality 5K CAD renders of the device on Voice. It’s worth noting that it’s a 5G smartphone which when released, would be the cheapest 5G phone in the A-series lineup.

The picture depicts a possible design for the Samsung Galaxy A22 5G. The device features an Infinity-U cutout on the display and a triple rear camera setup at the back. However, there is a square-shaped cutout that also holds a flashlight in the top-right corner. According to early rumors, its design language is similar to the Galaxy M62, which was recently launched in the Nepali market. The panel has visible bezels at the bottom. That’s fair given the price point at which it’s rumored to be sold. According to the leak, it will have a 6.5-inch touchscreen and a 13MP selfie camera tucked within the notch.

On the right, we have a power button with a fingerprint scanner embedded, as well as volume controls. The top has a secondary microphone while the bottom frame holds the primary microphone, speaker, Type-C connector, and 3.5mm headphone jack. Furthermore, the fingerprint sensor installed in the power button implies that the display would be LCD. Furthermore, Samsung will downgrade the image sensor with a 13MP triple camera configuration to make the smartphone more affordable with 5G.

Per the speculation, the Samsung Galaxy A22 5G will be unveiled in June. However, there is no word on pricing yet, but it will be less expensive than the recently launched Galaxy A32 5G.