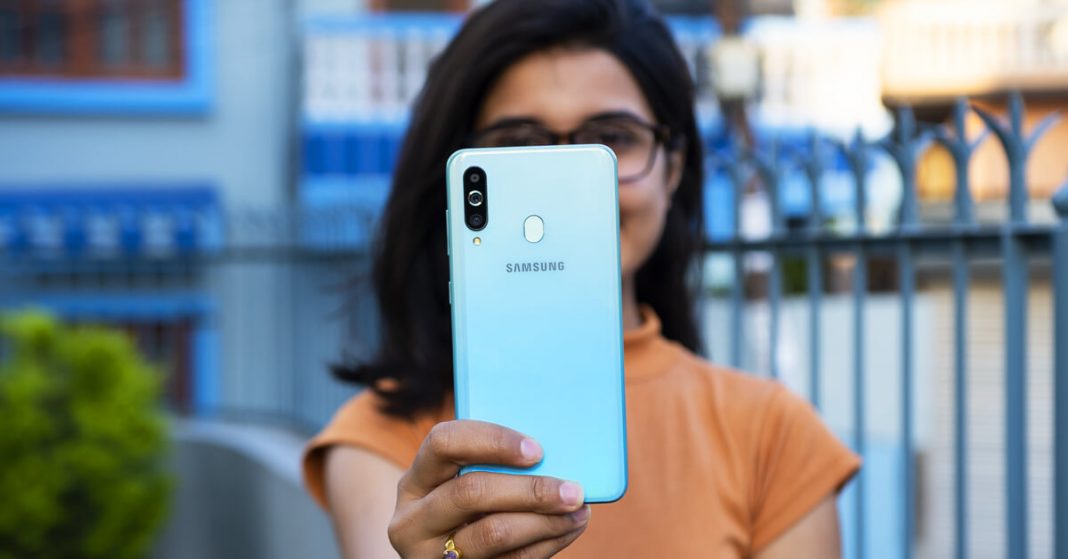 We’ve seen a few of M-series smartphones lately and all of them, I would say are a good value for money phones. This time around, we have the Galaxy M40 which is the cheapest phone available with a punch-hole display and the first M- series smartphone to feature Snapdragon SoC. But apart from that, what else does this phone pack? Is it worth your money? Let’s find out in this Samsung Galaxy M40 review!

Okay, so let’s start by talking about the infinity O display. It quite looks like the Galaxy S10. But it’s not an AMOLED panel, it’s a TFT one, which does not look bad honestly. But, Of course, if you use it beside an AMOLED screen, you can notice the difference but I guess in cost of an AMOLED panel, we are getting a punch-hole screen. So, I think Samsung is trying to compensate. However, in my opinion, it’s slightly underwhelming for the price.

By size, it’s 6.3 inches with Full-HD resolution and it’s protected by Corning Gorilla Glass 3. The bezels around it are considerably thin making the contents in the display look very good. Watching videos is a really immersive experience and so is playing games. The display here also doubles as an earpiece. There is no physical earpiece at the top of this phone. While having voice calls, the sound is projected through the screen with a technology called ‘soundcast technology’. It’s nothing new, we have seen the implementation on some high-end devices but impressively, this mid-ranger has it too.

The phone is also reasonably bright outdoors too so brightness is not going to be a problem.

Before starting to talk about the design, the one that I had with me had a Gradient blue color. And by far, it’s one of my absolute favorites. And it looks a lot better than its other siblings. 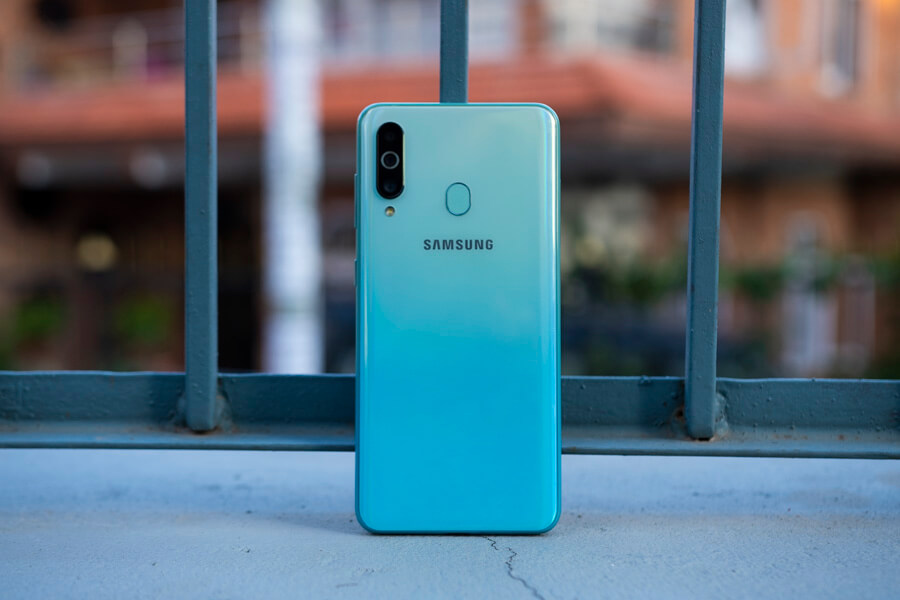 Now talking about the design, it’s your typical Samsung phone with the vertical camera setup, a fingerprint sensor, and the Samsung logo at the rear. It’s polycarbonate, the back, which is kind of expected for the price. But it looks so good that I kinda neglected that part.

If you are someone who spends a lot of time on your phone, you know how important feel on hands can be. The M40 does not disappoint on that part. Its mere size makes it very comfortable to hold. I had been using the A80 for some time and it never felt snugly on the hands. Perhaps the M40 is one of those devices that’s very comfortable to use.

So, everything looks good about M40’s design, except for the absence of a headphone jack. You get USB-C earphones inside the box though which in some ways tries to make up for it.

As for other aspects of the design, you get a fingerprint sensor at the back, unlike the Galaxy A50 that comes with an In-Display fingerprint sensor. But considering how slow the sensor on the A50 was, I am thankful that Samsung didn’t include one in here. The rear-facing fingerprint scanner is fast, not as fast as OPPO and Vivo but considerably fast.

As already said, this Gradient Blue color is quite a fingerprint magnet. So those of you, who doesn’t like putting on a case will have a tough time cleaning. But thankfully, this light Blue color helps in making these smudges seem less prominent. 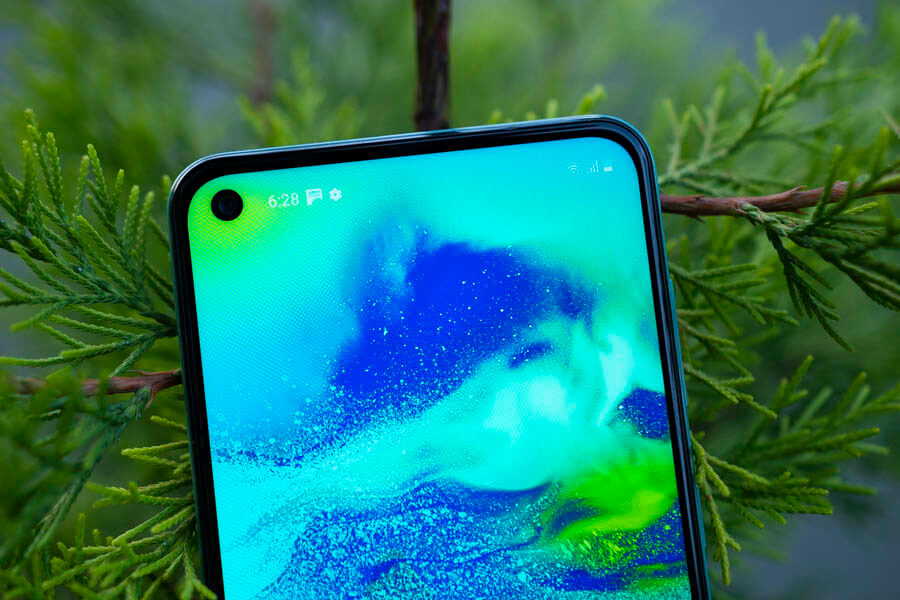 At the front, there’s a 16 MP snapper tucked neatly inside the punch hole. The selfies look pleasing at first glance and they really are pleasing. The skin tone looks natural, there’s nothing overdone, no extra saturation, no fake colors, just a nice-looking selfie. The HDR feature on the selfie camera works okay but I hope the company improves it more because some portions of the background look exposed.

Portrait selfies look good too. The phone does struggle to give good edge detection in hard areas like the tip of my hair in this picture, but other than that, the portrait images look good with nice background blurring.

As for the rear cameras, you get a triple camera setup at the back consisting of a 32 MP f/1.7 primary camera, an 8 MP ultrawide angle lens and a 5 MP depth sensor. Normal images from the primary camera look good, though they don’t pack in a lot of details. The colors look natural and vibrant.

Like many other phones, here too we get options to click pictures in 32 MP or 8 MP and the 8 MP ones look better in terms of colors and dynamic range. By default, the camera gives you 32 MP images.

The wide angles look good too. They pack in fine details and good colors. The details and colors are not as good as the primary lens but given the specs, it’s understandable.

The other 5 MP depth sensor works well enough. It misses the edges most of the times but the blur intensity is good and looks natural. So, I would say that the portrait images are average, not the best out there.

As for videos, you can record videos in UHD, FHD at 60 fps, FHD at 30 Fps and HD among which you will get the best stabilization and color is FHD at 60 fps.

So, I would say that the cameras are just good enough not very good not bad either.

On to the performance now. The M40 comes with the most popular and one of the best performing mid-range SoCs, the SD 675. It’s the same as the Note 7 Pro and it’s also the same that comes with some other phones with greater price tag than this. So, I would say that the phone is very competitive in performance regard.

On the graphics side, you get Adreno 612 GPU and playing even high-end games have never been unpleasing. I played PubG in high settings in HD and it ran very smooth. Just sometimes there were slight frame drops, but it ran fairly smooth. The display also helps deliver a good gaming experience. Similarly, mid-tier and low-end games are a piece of cake. As for heating, the phone does get warm after long gaming sessions, but not uncomfortably so.

And what I like is, the RAM management is fairly good. It offers 6GB of RAM and 128 GB internal storage which is great for the pricing. However, if you wish to expand it further, you will have to sacrifice on the second SIM slot. But for me, 128 GB is quite enough.

As for Software, you get Android 9 Pie with One UI version 1.1. This is the latest we know till now, so no complaints. One UI is one of my favorites when it comes to usability. However, on mid-range and low-end Samsung devices, the UI feels a bit slow. I mean, having used the S10, I have felt the difference. Maybe it’s the implementation, but use a Samsung Flagship and then use a Samsung Mid-ranger, you will immediately know what I am talking about.

But don’t get me wrong, I am just sharing my experience. You get so many other cool features like Dark Mode which makes the experience so much better and it’s good for your eyes too. You get navigation gestures, fingerprint gestures and other various customizations that you can choose according to your preference.

However, the phone does not exclude bloatware. You get many apps from Samsung like their app store and other third-party apps like Helo and Daily hunt. These can be uninstalled but I didn’t uninstall them because I wanted to show it to you guys.

The battery on this device is not its strongest suit. You get a decent 3,500 mAh battery which is well, smaller than most of the phones you get at this price.

The battery lasted me for an entire day, making me put it on charge at the end of the day, always. There are battery optimization features available if you wish to increase the battery life but without using it, one day of use is the limit here.

The phone gave me a screen on time of around 5 hours for which my usage included a lot of social media and chatting, watching videos, making calls and gaming.

You get a 15 Watt fast charger inside the box and that charges the phone fully in one and a half hours.

So, the battery, I would say is just okay considering, we are used to a standard 4,000 mAh batteries in similarly prices phones. As for call quality from the in-built microphone, it’s decent. If you are someone new to this, you will feel vibrations while making calls, but you get used to it. Voices on both the sides are clear though.

The single bottom-firing speaker on this one does an okayish job. They are loud but lack depth. Also, it rests in a position where it can get covered very easily, so yeah that can be bit of a problem sometimes.

So, I think the Galaxy M40 is one of the good contenders in the mid-range category. You can expect stellar if not the best performance, good enough cameras, and nice-looking design. The only thing that could make it an undeniable choice could be the display, if it was Super AMOLED but sadly it’s not. Other things about it are more or less good, expect the battery.

In terms of performance, we still have ‘the performer’, Pocophone F1. For fancy pop-up cameras and fancy design, we have the OPPO F11 Pro and Vivo V15. Not to forget, we have the Redmi Note 7 Pro as well. But if you are looking for a well-performing Samsung phone, you have got it with the M40.