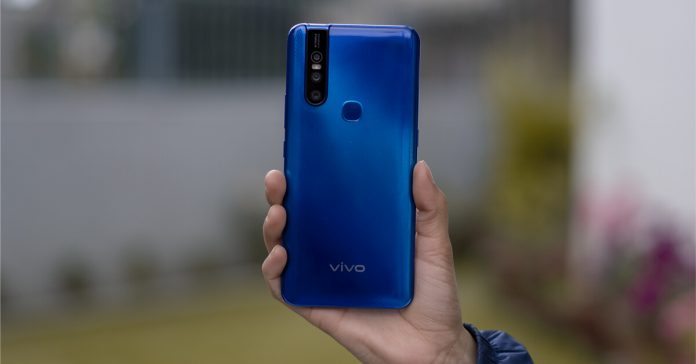 The pop-up selfie camera is quite on trend. The technology debuted last year on the flagship Vivo Nex. With pop-up selfie camera on the board, the phone lacks any sort of bezels, notches or hole punch cutouts. And such type of An immersive display definitely looks attractive. However, the phone didn’t land in Nepal. So we were unable to feel the tech and test the device. But recently, Vivo launched the mid-range phone with an elevating selfie camera. When it launched it was one of the very first phones in Nepal with such type of feature. The elevating selfie camera definitely looks fancy. But other than that, what does the phone packs inside. And how does it fares in real-life use? Let’s find out in this Vivo V15 review.

As usual, let’s start with the design. The design is more or less like the Vivo V15 Pro, except for a fingerprint sensor at the rear side. You get a vertical camera setup tucked neatly inside a black surface that creates a noticeable bump while placed on a plane surface. 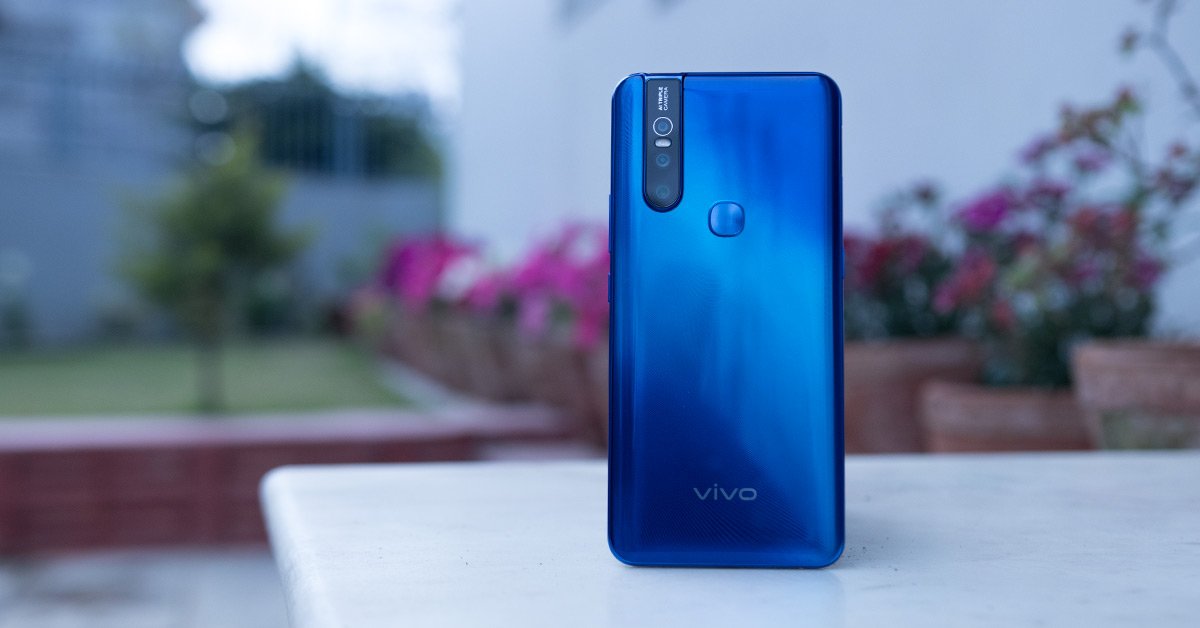 By looks, this gradient Blue color seems good to the eyes but the phone does feel very heavy on the hands. However, the weight seems evenly distributed in all parts, so the phone does not feel hollow.

The device comes pre-attached with a screen protector, it is not noticeable though. This is a very nice touch because there are many people out there, who do not like putting a tempered glass on the phones’ screens.

However, the buttons are not tactile enough to my liking. And talking about buttons, you also get a dedicated button for Google assistant that comes handy only when you get used to it. But, you don’t have any option to remap to other apps.

And just above it, you have the SIM slots alongside a dedicated Micro SD card slot.

The material on this one looks like Glass, but this is plastic, unfortunately. The problem with glass looking plastic backs is they tend to start pigmenting even when you use it with covers. On the brighter side, this is something Vivo can take as feedback and get it right the next time.

Upfront, you have a 6.53-inches IPS LCD display that looks quite good. Of course, when you place it beside the Super AMOLED display of the Vivo V15 pro, you can spot the difference right away. But for the display this one is, we can’t call it bad. Outdoor too it fares quite well and you get quite the brightness. There are minimum bezels around the screen except for the chin. 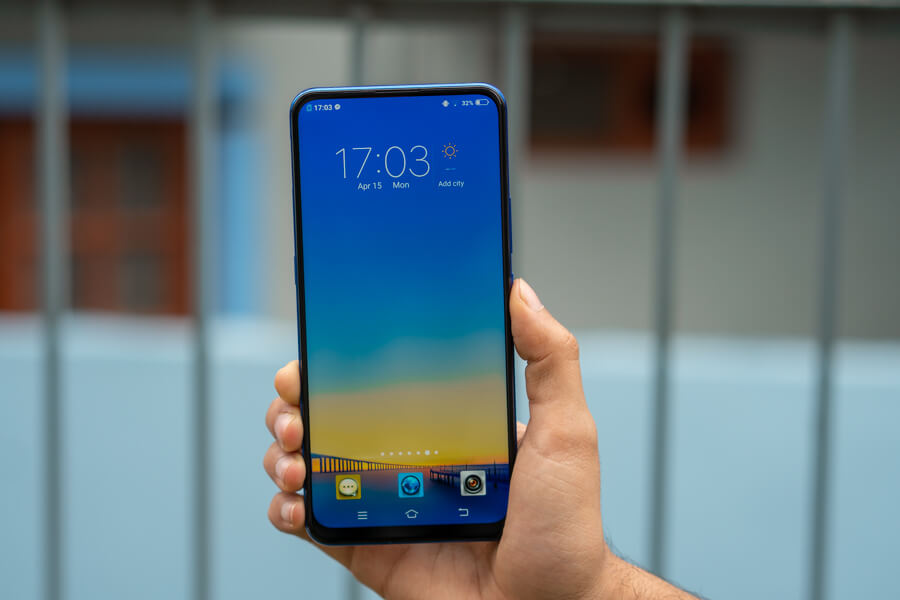 But then again, the company has put in a lot of efforts in making this screen look like it’s bezel-less however, if the chin would have been a little smaller, the display would look even better.

And if you ask me about the quality of the display, as I said earlier, I would say it’s nothing to complain about. You get a vibrant one here and it’s large, so watching movies or playing games has been quite an experience. And while playing PUBG you get enough space for you to rest your fingers without obstructing the game. Viewing angles are great and you will love the display overall.

It’s a Vivo smartphone we are talking about, so explaining about the cameras in detail is a must. The phone has a 12 MP primary camera, an 8 MP secondary Ultra-wide-angle lens followed by a 5 MP depth sensor. And as the specs go, the images follow the similar performance. They look good and have good color reproduction if not the most accurate.

But one thing I have noticed having used the ‘Pro version’ too is that because it uses pixel binning to give 12MP shots, the pictures are much much better on the higher end variant.

Back to talking about the V15’s cameras, the pictures are bright and vibrant, no doubts on that, but when you zoom in, the details are just average. But in the perfect light, you can get some dope pictures.

The ultra-wide-angle lens is something you can brag about in this smartphone. Sometimes the wide-angle shots have better colors than the normal ones, which was surprising but its a welcome feature. And I also compared some of those wide-angle shots with the Galaxy A50 and found the V15’s camera to have better details and colors. So, the secondary lens does justice to the cameras.

Normal Vs Wide-Angle Mode
1 of 8

The third Depth sensor is average in performance though! It misses out on edge detection part most of the times and although the different portrait lighting effects seem fun, they have been inconsistent on my use.

A perfect example of this is the Monochrome effect which has only worked like 2 times on my use, other times it has failed to deliver! And other than the rainbow effect, there is no particular difference between other options, except for some changes in the skin tone.

Having said that you have options to adjust the background blur after taking pictures like the Vivo V11 and even the V9, so nothing head-turning here as well.

The pictures in artificial lighting turn out good. They look nice to the eyes and have good details. There is also a dedicated night mode here that uses a long exposure, which works to preserve some details but nothing to go on about. Normal nighttime pictures have grains to them and look no good.

Selfies appear nice from the 32MP pop-up camera. It is very fancy taking selfies in public because people look at the phone and make a perplexed expression looking at the alleviating camera which has been fun for me.

The selfies are bright and colorful and on par with what we expect from a Vivo smartphone. I would not say that the skin tone is the most natural, but they do not look bad if you ask me.

There’s the infamous beauty mode too which is aggressive only if set to the highest numbers. Other times, if you get almost natural looking selfies. And as mentioned in the impressions video, there are tons of photoshop features in this one, which may come to the liking for many people.

There are portrait selfie features too, just like the main camera and the pictures look beautified to some extent, not sure why and how but I am pretty sure I turned off the beauty mode while taking those selfies.

I have also compared the selfies of the A50 and V15 and while the details are preserved well in the V15, the A50 has a much natural looking color.

Okay, let’s go to the performance side of things. This phone uses the Helio P70 and 6GB RAM to power itself and does a pretty good job. It is definitely an upgrade over last year. The same chipset is also there on the OPPO F11 Pro and it’s going to be an interesting battle as to which phone has optimized it better.

On to real life performance, with this one you can play PUBG on medium settings in HD in high frame rate settings pretty smoothly. There are minor stutters and slight drops in frame rated that will go unnoticed. Plus, the display is large and the control buttons don’t obstruct your gaming experience.

Normal to even heavy tasks run well but messenger on top of heavy games makes the phone panic sometimes. Other than that, multitasking has been smooth, app opening is fast and switching in between apps is fairly smooth.

On to the software, this one comes with Android 9 Pie which is pretty standard in 2019. I have received altogether three updates during my time with the phone which I appreciate. But what I don’t appreciate is the Funtouch OS that’s there on this phone.

The major problems I have with it are: 1. The upward swiping taskbar. 2. Those cartoonish and large weird looking icons.

Users have no control over the taskbar settings. However, what you can do is change the theme and make the icons look a bit better. And there is a search button inside the settings menu now which has made using this phone easier in comparison to its predecessors.

But one thing is, as long as I have used the phone, I still get confused on whether to swipe down or up for the taskbar and I really hope Vivo brings an update to change that or get it right the next time.

The battery on the V15 is a bigger 4,000 mAh and this is one of the things that sets it apart from the pro model. Although the battery has to power an IPS display which consumes more power, I am very well satisfied with the back up it gave me.

I am a pretty heavy user with most of my day spent on YouTube and Facebook and Gaming. And even so, the device held up very well for an entire day. On normal usage, the days that don’t involve much gaming, the battery even lasted for more than a day.

And the phone is enabled with an 18-Watt fast charging that does not take even 2 hours to get your phone fully charged which is a bonus if you ask me.

But, the Micro USB port is a minus to the device. Last year, we had the same story and even now, in 2019, there is the same thing all over again. I think there are some things that companies need to understand themselves, things about being updated to trends, things about evolving!

Now let’s talk about the fingerprint sensor. It is fast and accurate gets it correct 9 out of 10 times.

Strangely, There is no Facial Unlock feature though but it’s okay considering the selfie camera pops out each time you look at the Vivo V15 pro and that was annoying. Also, this phone does not miss out on the headphone jack so this one’s a plus. The single firing speaker at the bottom does an average job.

So, my conclusion about the phone is, this one looks good overall. Except for the UI, I have no complaints what so ever. Having said that a price of Rs. 45,190 in Nepal, it is a bit too much. I mean, you can get the 128GB version of the Huawei P30 Lite or the Galaxy A50 for less price. And even if you are into Pop-up camera and love VIVO, you should get the Pro version that comes with a Super AMOLED display, superior Snapdragon 675 processor, and better cameras.

Honestly, with the Vivo V15, you are paying the extra price for the pop-up camera! And until and unless, you don’t absolutely want that, I think the device is asking for a little premium price than it should.