With the full-view and notch-less displays gaining momentum, almost every company is trying to be a part of that. And Oppo – the company that gave us the slider cameras with the Oppo Find X, decided that it was too much work. So, they opted for a pop-up selfie camera just like everyone else. And here’s the phone which did that – the F11 Pro. But other than the selfie camera, what are the striking features of the phone? Let’s find that out in this Oppo F11 Pro review.

On the design front, Oppo has done it again – fooled me into thinking that it was a glass back, even though it’s plastic. Maybe it’s the color scheme, that looks different even though it follows a triple-gradient color pattern. This, here, is the Thunder Black, which comes in a pretty unique color pattern – a blue, black purple blend. And this does look stunning. I liked it, but if I had my way, I’d definitely go for the Marvel Avengers edition, which is a tad bit expensive. The rest of the design is pretty standard, though. A rear-mounted fingerprint sensor, volume rockers on the left and a power button on the right. There’s a headphone jack and a micro USB port. I disdain the micro USB port, but I don’t get it why the companies like Vivo and Oppo are still on it.

Build quality is pretty standard for a plastic phone. It’s got some heft, and an okay feel in the hands. The plus side, here, is the pop-up camera comes with a Fall Protection – if it’s out, it just slides back in case you drop it!

The design is one of the phone’s strongest suits. But here’s something it missed out – cameras. The F11 Pro packs a whopping 48 MP primary camera and a secondary 5 MP depth sensor. But while every other mid-ranger these days are packing an ultra-wide angle sensor, this one doesn’t. And, for a company that prides itself in having one of the best cameras around, they missed out on that. Is it deliberate? I don’t know. But I just think that they should have made some kind of upgrade from the Oppo F9. After all, the F9 had the same camera configuration. Still, I had quite a bit of expectation from the camera. Too bad, I was somewhat let down. Don’t get me wrong – the camera is not that bad, it’s just my expectations, because when we did a camera comparison between the Oppo F9, Nova 3i, and the Vivo V11, last year, Oppo was the clear winner. But now, I doubt the F11 would perform the same way.

Some images come out good enough in well-lit conditions. But for others, the dynamic range is not very good. Many photos come out over-processed, and for some reason, it kind of messes with the intensity of blacks. That is not really noticeable, though, only when you compare it with other phones, for instance, the Vivo V15 Pro. Bright colors like greens and reds can come out a bit too over-blown.

However, close up shots in well-lit environments can be great. Similar is the case with portrait shots. The colors are good, details are there, and the edge detection is better than what you regularly see on phones of this caliber. The blurs and subject focus on the bokeh is on point, and so, the portrait images are better than your regular images.

There is, however, a dedicated Night Mode. And just like any other, this is a long exposure shot of about 5 seconds. The colors it produces are a bit too smooth, but it kinda lacks some details and texture. But of course, that is to be expected of a Night Mode in a camera.

As for the pop selfie camera, it is a 16 MP unit. And the selfies are a lot better than the normal photos. 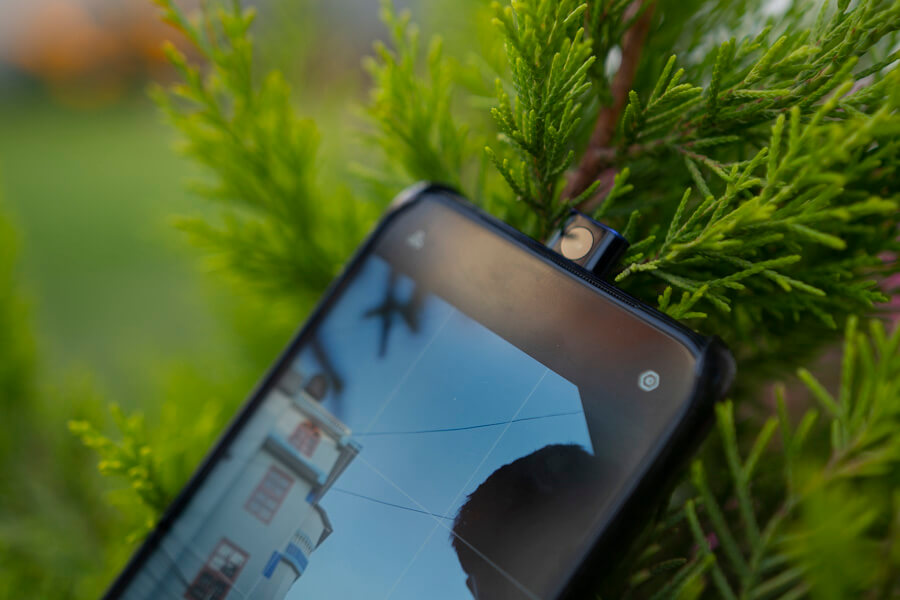 Selfie images pack good details, good colors and the dynamic range is balanced too. Portrait selfies, even though they’re purely software is pretty good too. My only complaint is that it cannot recognize multiple faces in a portrait selfie.

As for videos, it can record Full HD videos at 30 frames per second – not even 60. And this is something that is available in other more affordable devices as well. So, nothing impressive here. Also, the video quality is not something I’d like to go on about – the details are about average, colors are the same…sometimes, even unnatural. The low light video quality is even worse. However, there is Electronic Image Stabilization, so, this is your better-than-average video camera, to be blunt.

With the pop-up selfie camera, the display here is notch-less and bezel-less. There is a small chin at the bottom, but nothing I can’t live with. And as it is with these full-screen displays, it was fun to use. You get a lot of room to work with, for almost anything – watching videos to playing games, or just casual browsing. The display is big, too. A 6.5 inch IPS LCD display with a 19:9 aspect ratio greets you and I’ve loved the sheer size of it. There’s just so much room. And with 90% of screen to body ratio, the phone does not feel so big in the hands. The screen has some good colors, great viewing angles, and ample brightness. The pixel density, is great too, but what I will say, though, is the competitors, in similar price range, offer AMOLED or at least OLED displays. This doesn’t and so…it feels like a letdown.

Now, let’s talk about performance. And here’s a bit of a downer. This because it still packs MediaTek Helio P70 processor, which can be compared to the Snapdragon 660. But the competitors like the Galaxy A70 is packing a Snapdragon 675. And that kinda bothers me.

Go by the benchmark scores, and you’ll find other phones with better benchmarks out there. Of course, the scores are not the whole story. Regular performance is snappy. Apps open and load fast, and you can also do multitasking with a lot of apps in the background. Gaming is also pretty breezy. It will handle all kinds of games unless you want to play PUBG in the highest settings, it’ll do for the most part.

It’s just that for the price, there are other options out there. So, for me, the performance is a mixed bag.

And making it more of a mixed bag is Oppo’s not-so-good UI. Oppo’s phones are not known for their UIs, they’re mostly horrible, but this time it’s a bit different. Based on Android Pie with Color OS 6.0, the user experience has improved quite a bit. There are small improvements like an app drawer option, and it also allows you to access the Developer mode without the constant reminder that you’re on Developer mode and you need to turn it off. To say the least, the UI, although bad, is not an eyesore this time around.

Also, the battery is the phone’s strong suit. With a 4000 mAh battery, you can get 2 days of battery life easily with normal usage. And even under extreme usage, you can end up with about 25 to 30% battery left at the end of the day. What’s more impressive is the charging times – the VOOC Charge 3.0 does a great job when it comes to charging. The phone charges from like 2% to 90% in under an hour. The only thing is, I’d have liked to see a USB-C port.

So…what did I miss? Ummm…the speaker quality is good. It’s a mono speaker, but it sounds good actually. It gets 128 GB of storage, which is good. But in case you need a micro SD card, you have to sacrifice your second SIM. Also, the fingerprint sensor is quite fast. Given that it is a traditional physical sensor; it works as expected. The Face Unlock with the pop-up camera is fast, too, and apart from pitch black conditions, it works almost all the time.

As it stands, the Oppo F11 Pro is a good phone, with respectable performance, a good display, okay cameras, great battery, and some great design choices. For a standalone device, it is a good phone, no doubt. But when you start comparing it with others, that’s when things don’t look so good. It’s rivals, in the same price category, offer many other traits – like AMOLED displays, better processors, in-display fingerprint scanners and one that I miss the most – an Ultra-wide angle lens.

So, this is something that you won’t go wrong with. It’s just that it kinda fails to transition from the traditional to the modern trend in some ways.