Samsung hosted a Galaxy Unpacked event on January 14th to unveil its latest flagship S21 smartphone lineup. Along with the three new Galaxy devices and the new Buds Pro, Samsung also took the opportunity to announce its latest smart object. In this post, we will be taking a look at the specs, features, official price, and availability of Samsung Galaxy SmartTag and SmartTag+ in Nepal.

Samsung has beaten Apple by coming up with the new SmartTag before the widely discussed AirTag. It is a small, portable diamond-shaped object with rounded edges and corners. SmartTag is engraved in the circle on the middle of the tracker. There is a circular hole above it that you can use a lanyard to attach to an object you need to keep track of. It has a small user-replaceable coin-sized battery that the company claims will last for months. Samsung Galaxy SmartTag works in the same way as any other trackers from Tile. It uses Bluetooth signals to communicate the location of the objects that it is attached to, making it easier for users to locate their misplaced or lost items. You can even ring the tracker if it is within the range. It is different than the Samsung Galaxy SmartThing Tracker that utilized LTE technology instead of Bluetooth. 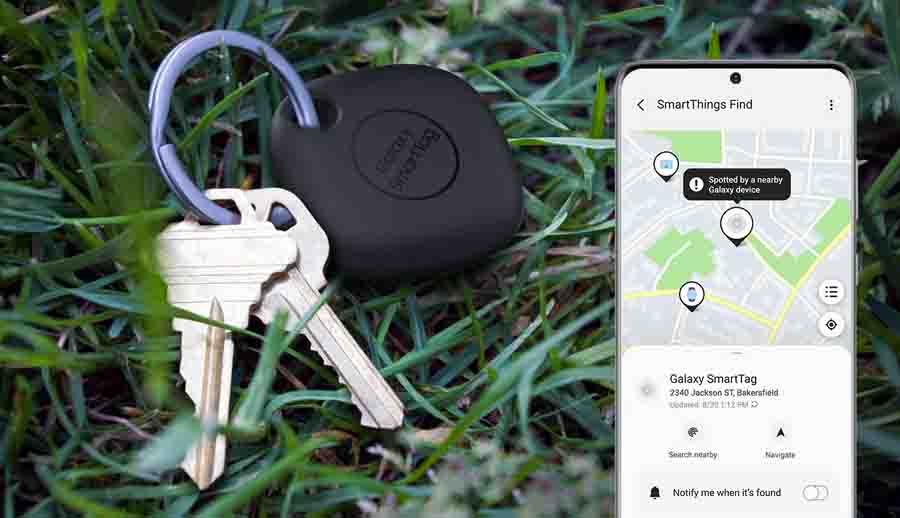 These Bluetooth signals are received by devices in the Galaxy Find networks. You will be notified when the lost item has been tracked by Galaxy devices. The Find network has end-to-end encryption to avoid data leaks of the users.

Here, Galaxy SmartTag uses the Samsung Find feature which is integrated into the SmarThing app. You can also use it as a stand-alone web application. SmartThing Find was announced back in October 2020 and is compatible with Galaxy devices running Android 8 or above. It allows users to re-locate their Galaxy devices including smartphones and earbuds. And now, the new SmartTag will also be able to take its advantage.

For more precise location tracking, Samsung has announced Galaxy SmartTag+ (SmartTag Plus) as well, which will launch later this year. This one is more similar to the rumors AirTags as it uses UWB instead of Bluetooth. Thus, the tracker offers spatial accuracy and directional accuracy. There is also an AR Finder to help you with tracking.

The price of the Samsung Galaxy SmartTag in Nepal is NPR 2,599. You can buy SmartTag from Samsung authorized retail stores across Nepal. For now, Samsung Nepal hasn’t brought the UWB-powered SmartTag+.