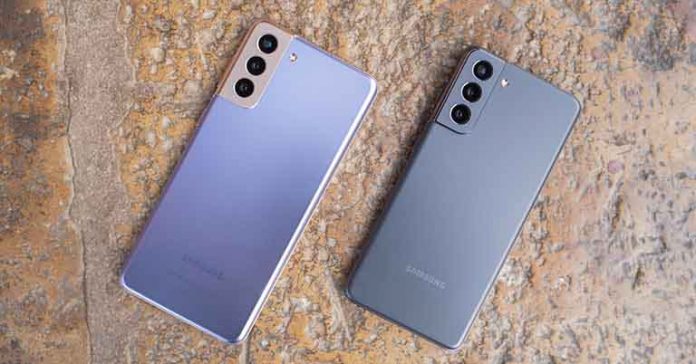 In a virtual Unpacked event held on Jan 14, Korean giants Samsung unveiled its next generation of flagship phones as a successor to the Galaxy S20 devices. Nepalese users were able to pre-order these new phones from 21st Jan to Feb 4 with exciting pre-booking offers. However, the pre-booking offer has ended and you can now purchase the Galaxy S21 and S21+ from the nearest Samsung outlets. So, without further ado, let’s learn about the specs, official price, and availability of the Samsung Galaxy S21 and S21 Plus in Nepal.

Samsung has decided to keep the curved display exclusive to the S21 Ultra to differentiate it from the rest of the lineup this year. Thus, the Galaxy S21 and S21+ come with flat displays of different diagonal.

The Dynamic AMOLED 2X panel used on these phones has a centered punch-hole cutout for the selfie camera placement. Resolution on both the device has been scaled down from QHD+ on their respective predecessor to just FHD+. At least, Samsung is providing the latest Gorilla Glass Victus for the front screen on both the S21 and S21+. 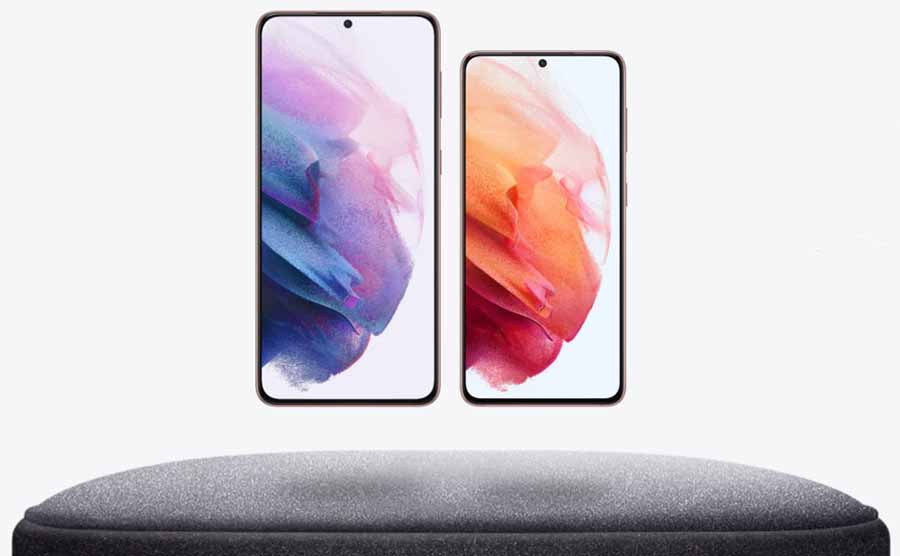 While the S21 sports a 6.2-inch display, the S21+ has a slightly larger display of 6.7-inch. Both screens feature an aspect ratio of 20:9. Samsung has listed the peak brightness of the phones at 1300 nits which are slightly lower than the 1500 nits on the S21 Ultra. Similarly, these devices support a 120Hz adaptive refresh rate and HDR10+ display technology as well.

Samsung has improved the in-display fingerprint on the new devices. The S21 lineup will mark the debut of the Qualcomm 3D Sonic Sensor Gen 2 that was announced just a few days ago at CES 2021. Compared to its predecessor, the new ultrasonic fingerprint scanner has a 77% larger reader area. The scanner is also 50% faster and can record 1.7x more biometric data.

Like on the Galaxy Note 20, the vanilla S21 comes with a glastic body which is basically a combo of glass and plastic material. Besides Note 20, we’ve seen Samsung use this material in phones like the S20 FE and other mid-range devices. The glastic rear panel on the Galaxy S21 has a glossy finish. On the contrary, S21+ feels more premium here because of its glass build which also uses Gorilla Glass Victus for added protection.

As always, Samsung will be shipping its flagship smartphones with either Snapdragon or an Exynos processor based on the region. Select regions including Samsung’s home market of South Korea, the USA, and China will receive phones with Snapdragon 888. On the other hand, the rest of the global audience will receive the Exynos 2100 variant. 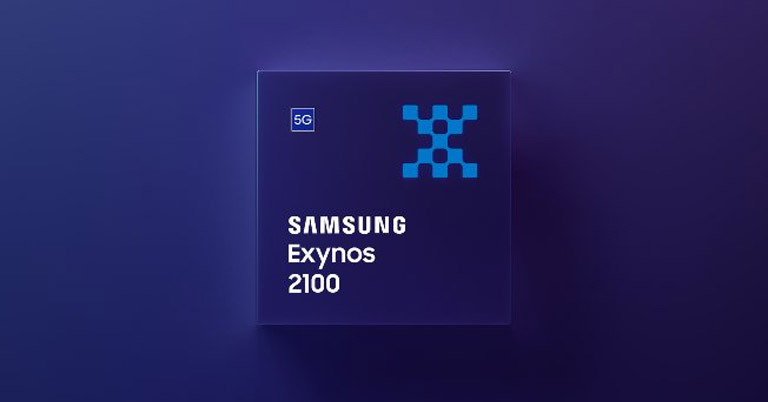 This time around, Samsung has created a lot of hype around its flagship Exynos 2100 chipset, even using catchphrases “Exynos is Back”. The company is confident there won’t be a significant performance gap between the two flagship chipsets. After all, both the Exynos 2100 and Snapdragon 888 are based on a similar 5nm process node and a tri-cluster architecture. Some are even claiming superior performance on the Exynos 2100 because of the higher-clocked clock speeds.

The two chipsets come with different GPUs. SD 888 has Adreno 660 while on the other hand, the Exynos 2100 has Mali G78. Though both the processors have integrated 5G modem, the ones used are not the same.

Both S21 and S21+ will sport 8GB of LPDDR5 RAM and users can make a choice between 128GB and 256GB of internal storage. However, Samsung has killed SD cards with the Galaxy S21 series so you won’t be able to expand the storage. On the software front, these phones will ship with OneUI 3.1 based on Android 11 out-of-the-box.

Samsung has redesigned the camera bump for its Galaxy S21 lineup. Here, the bump extends from the metal frames of the devices. The bump on the S20 and S21+ are identical and it is smaller than that of the S21 Ultra. It is because the two devices only have three cameras at the back compared to Ultra’s five. Similarly, the camera bump also doesn’t house the LED flash.

Both phones have an identical camera setup too. Samsung has used a triple camera setup led by a 12MP wide sensor for the primary camera. It will have support for Optical Image Stabilization (OIS) and Dual Pixel PDAF. There is another 12MP sensor for capturing ultra-wide angle shots. Completing the setup is a 64MP telephoto lens with an optical zoom of up to 3x. The telephoto lens also has the support for OIS and Dual Pixel PDAF. On the front, there is a 10MP selfie camera enclosed inside the circular cut-out. 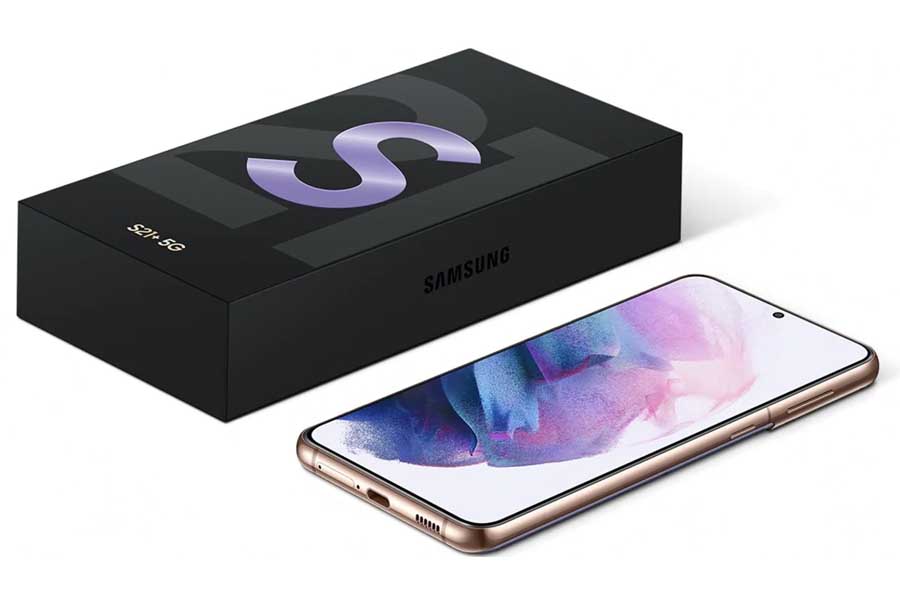 Here, Galaxy S21+ houses a slightly bigger battery of 4800mAh compared to S21’s 4000mAh. Both phones support 25W USB Power Delivery (PD) 3.0 fast charging. Other than that, all the devices in the S21 lineup come with 15W wireless charging and 4.5W reverse wireless charging. Also, Samsung has followed Apple’s footsteps on not including charger in its flagship devices. Who didn’t see this coming?

All the devices on the S21 lineup have IP68 certification against dust and water. Other features include the inclusion of Knox security, Ultra-wideband (UWB), Dex, and ANT+. Also, Samsung is not giving up on Bixby as the voice assistant is present on the S21 series.

In terms of color options, the Galaxy S21+ is available in four variants – Phantom Violet, Phantom Black, Phantom Silver, and Phantom Pink. On the other hand, the S21 retains the Violet and Pink color options along with White and Grey. Similarly, there is a custom color option including Phantom Red in certain regions.