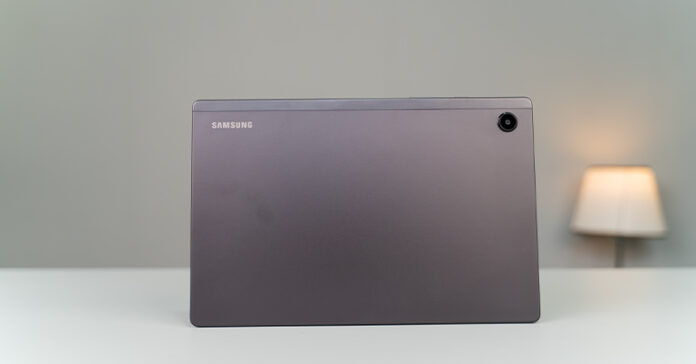 The new Galaxy Tab A8 is Samsung’s latest mid-range tablet and the successor to last year’s Tab A7. If you remember, my review of the Tab A7 ended with me calling it my go-to budget tablet. However, a lot has changed since then. More on this review of the Samsung Galaxy Tab A8.

Just take the number of Android tablet releases, for instance. Google recently reported nearly 100 million new Android tablet activations in 2021, which is a 20% year-on-year growth. The demand for tablets—especially the affordable ones—has surged globally as educational institutions were forced to go online amidst the ongoing pandemic, thereby making Android tablets relevant once again.

This also means Samsung has a lot more competition in the budget tablet market now, compared to how things were a couple of years ago. In the past year alone, we have seen tablets from brands like Xiaomi, Realme, and Nokia—while Oppo, OnePlus, and Vivo are soon to follow suit.

For us, the stand-out release so far has been the Xiaomi Pad 5, which starts at Rs. 45,000 here in Nepal. That being said, not everyone needs the top-of-the-line specs, and many would rather prefer a more affordable device instead. This is where the Samsung Galaxy Tab A8 comes in. Not only does it cost a lot less, it even has an LTE variant and expandable memory, which the Xiaomi Pad 5 lacks.

With that out of the way, let’s start our review of the Samsung Galaxy Tab A8 with a quick overview of the design. And here, things are quite typical for a tablet in this price range. Its body is metallic for the most part, except for the portion on the right, which is plastic-made. I’m guessing that’s for the Wi-Fi, carrier signals, and other radio waves to pass through.

Overall, the Tab A8 feels strong and durable—while weighing about 508 grams. My review unit has this matte black finish, and Samsung even offers this tablet in Gray and Pink color options.

Over on the front, you get a big 10.5” display with a 16:10 aspect ratio. This screen real estate is plenty enough to view different types of documents including PDFs and presentations. To make things simpler, the company ships it with Microsoft Office pre-installed as well. Samsung Notes is another helpful app here, using which you can take notes, add annotations, and such.

You won’t face any problem watching videos on YouTube on the Galaxy Tab A8. You can even stream HD content on Netflix, thanks to the Widevine L1 certification. Adding to the multimedia experience is the quad-stereo speaker setup that supports Dolby Atmos audio.

That being said, I believe Samsung should’ve provided a better screen instead of this TFT panel. I won’t say it’s downright dismal, but given the growing competition, Samsung should be doing better in this department. Although expecting an OLED display in this price bracket is absurd, we have seen better LCD screens in much cheaper offerings like the Realme Pad. Now let’s talk about its performance. Interestingly, Samsung doesn’t explicitly mention the exact chipset used in the Tab A8, but we can confirm that it’s powered by Unisoc Tiger T618.

Qualcomm’s decision to go all-in on 5G—even in the budget category—has created opportunities for MediaTek and Unisoc to grow in the 4G market. In fact, 2021 was Unisoc’s most successful year by far in recent times. It even marched past Samsung to become the third biggest chipmaker globally according to a report by Counterpoint.

And the T618 has been instrumental for Unisoc in this achievement. First announced in 2019, this chip is now more popular than ever—especially in the Chinese market.

In terms of raw CPU power, it is not that different than the Snapdragon 662 on last year’s Tab A7. That being said, we found the T618 performing better on GPU benchmarks such as the 3DMark Wildlife.

How’s gaming on this thing?

And that reflects on the gaming side of things as well. The Samsung Galaxy Tab A8 can handle PUBG: Mobile at HD graphics, which was not possible on its predecessor, although I found Smooth Graphics and Ultra frame rate to be the optimal settings here. Similarly, I had no trouble playing Injustice 2 at its default settings. In terms of day-to-day usage, the 3GB RAM that variant I tested feels rather slow. Apps take some time to load and multi-tasking is not that smooth either. Likewise, with around 10GB of storage already occupied by the system out of 32GB, you won’t have much space for your apps and other files.

In this matter, I’m glad that Samsung is only offering the 4GB variant in Nepal. However, for other regions, I strongly suggest you get the 4GB variant by pushing the budget a little.

Moving on, the one aspect where this tablet has an upper hand over new Android tablet markers is the software. Given Samsung’s experience in making tablets—and now foldable—One UI for larger screen devices has gotten significantly better over the years.

I have talked enough of the Edge Panel and the Galaxy ecosystem in my previous Samsung tablet reviews. New features on the Galaxy Tab A8 include Samsung Flow and the Kids Mode.

While it doesn’t support DeX, Samsung Flow is a close substitute. With this, you can connect the tablet to your PC over both wireless and wired mediums, allowing you to share messages, clipboards, and files between the two. Similarly, you can even cast your tablet to the PC to enjoy Android apps on a bigger screen.

On the other hand, the aforementioned Kids Mode is Samsung’s answer to Google’s Kids Space that you can find on many Android tablets. It is full of fun, kid-friendly content. Moreover, users can set parental control to determine what their children can do inside this bubble —including the screen time, allowed apps, and more.

Moving on, Tab A8 is obviously not going to wow you with its cameras. Its 8MP rear camera can handle things like scanning documents—while the 5MP front-facing camera will get you through online classes just fine.

As for the battery, I was able to get up to 7 hours on screen-on-time on a full charge here. I mostly used it for attending online classes, streaming multimedia, and even gaming every once in a while. With a relatively less demanding workload, it’ll easily last for two days.

But charging this thing is a bit of a hassle. Although the Galaxy Tab A8 can take in up to 15W power, Samsung only ships a 7.7W charger inside the box. Using a 15W power brick, you can expect its 7040mAh battery to fill up from 0 to 100% in a little over 3 hours. 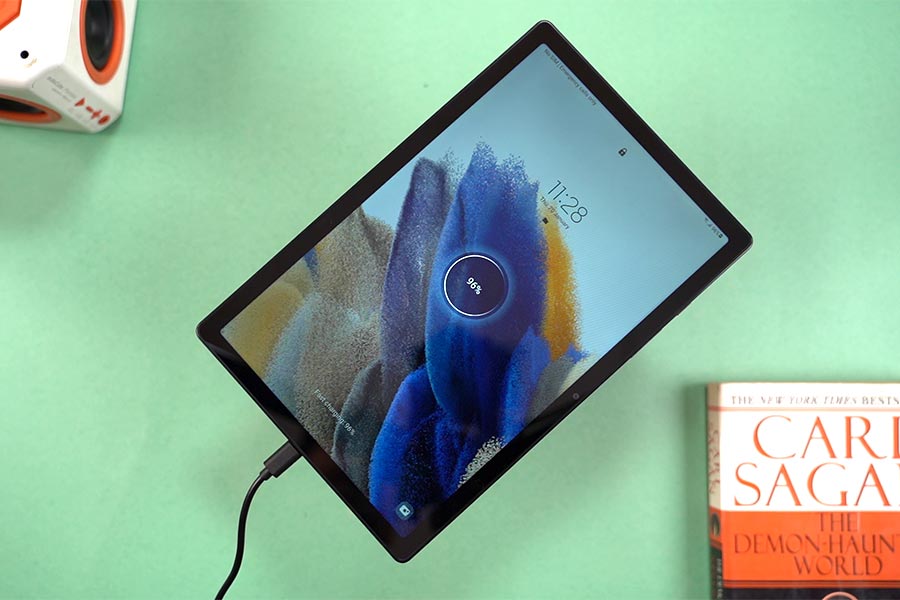 All in all, the Samsung Galaxy Tab A8 is a good iterative update over the Tab A7. While the latter was the best overall tablet in its price range last year, history hasn’t repeated itself this time around.

Although Samsung still has an upper hand when it comes to software, brand recognition, and global availability, other Android tablet makers have started to catch up. So, it needs to bring some meaningful upgrades with the Tab A9 if it wants to stay relevant in the midrange tablet segment.

That being said, there are not that many options if you look for midrange tablets in Nepal. If you have the extra cash, you can always go with the Xiaomi Pad 5, which is the undisputed winner in this product category. But if you are on a tight budget and want LTE connectivity, Galaxy Tab A8 is the way to go for now.