There are very few companies making Android tablets these days, and the number is a lot less when we look at the budget tablet section. Samsung remains one of the few smartphone manufacturers that’s still coming up with Android tablets. But then those from the company too cost upward of 50K. For instance, there’s the super expensive Tab S7 or the mid-ranger Tab S6 Lite. We’ve already covered the Tab S6 Lite, and today we’re going to review the Samsung Galaxy Tab A7 (2020).

For those looking to shop for a tablet in the budget segment, there’s not much of an option. Of course, you can buy the Amazon Kindle Fire, but that would be breaking away from the Android ecosystem. So, given the fact that there’s a limited set of choices for customers in the budget tablet segment, it made sense for Samsung to come up with one. 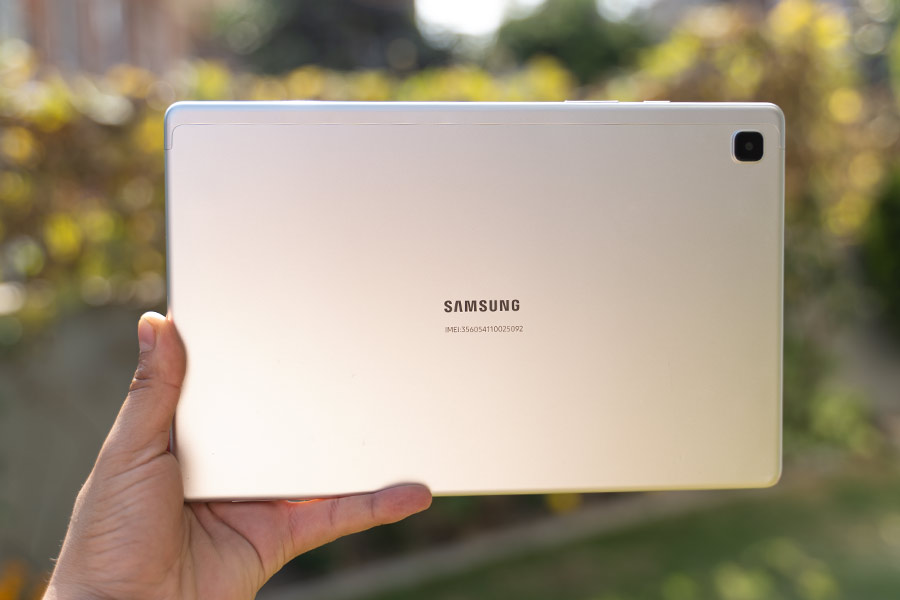 Galaxy Tab A7’s metallic build gives it a very premium feel. It’s not every day that you see a budget tablet with a metallic build, so that’s a good thing. However, considering some of the compromises that Samsung has made in some areas, it could have been better if they had considered a cheaper alternative here rather than in other departments. Anyway, what’s done is done. You still get a premium-looking device with a solid aluminum build. I’ve with me the silver-colored one. Other color variants include gold and dark grey.

The design isn’t particularly striking. It’s pretty minimalistic if you ask me. At the back, there’s an 8MP camera module on the left-top-hand corner and the Samsung logo along with the IMEI number is stamped right in the middle. The front is no different. Thick bezels surround the display and the front camera is on the right-hand side bezel.

There are 2 speaker grills on each end, with a USB-C port and a 3.5mm headphone jack the extra additions on one end. On the left, you’ll find the volume and the lock button. Similarly, on the right side, towards the bottom, you’ll find a SIM + microSD tray.

Measuring 9.8 x 6.2 x 0.3 -inches and weighing about 1 pound, the device is relatively thick and heavier. However, I didn’t find it troubling to carry around or to use.

This device sports a 10.4-inch screen. It is a TFT display with 2000 x 1200 pixel resolution. The huge screen is surrounded by bezels of substantial size. Though, it does come in handy as it decreases the chances for accidental touches. However, considering how the Galaxy Tab S7 is famed for its AMOLED panel, it was rather surprising to see such a downgrade on this one. But then again, this is a budget tablet. Having said that, the display might not be mind-blowing, but it is not a pushover either. The pictures come out big and sharp, the color definition is decent enough, however, the less we talk about its brightness, the best it is. On its big screen, you’ll be able to properly consume Netflix and Amazon Prime series. You’ll find the videos to be fairly vibrant with popping colors. Furthermore, the screen covers 102% of the sRGB color gamut. Thus, the colors are fairly accurate. Overall, you won’t be missing any details in whatever you watch on its screen.

However, as I mentioned previously, the screen brightness is the weak-link here. At 329 peak brightness, it is not the brightest display out there. Even with full brightness, you’ll have a hard time while viewing darker scenes or while viewing something on a bright sunny day.

I did not face any problem while using the device. The screen responded perfectly to all my gestures and felt smooth, except for the occasional lag in animations. Overall, barring the issue with the brightness, this display, to me, feels perfect for everyday web surfing and media consumption. 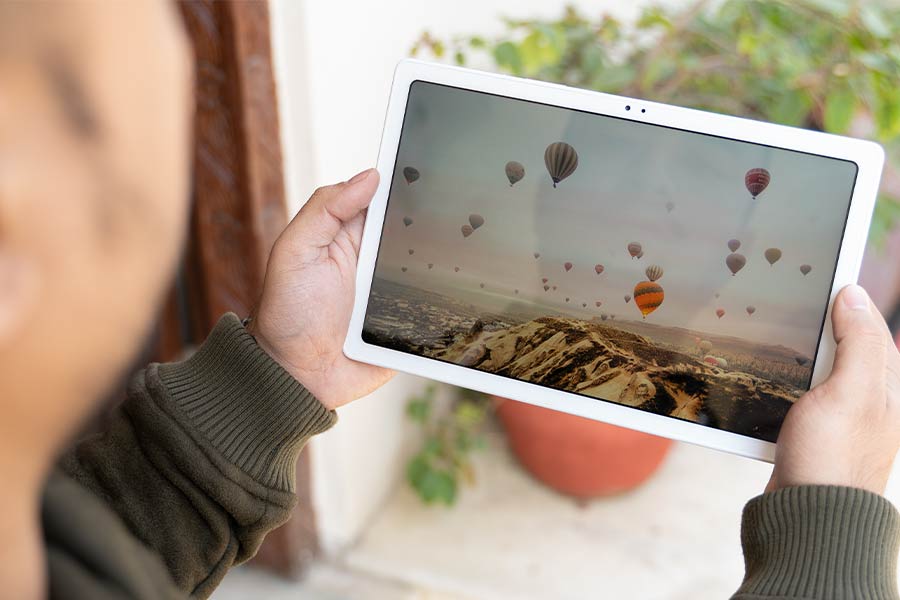 Out of the box, this device comes with One UI 2.5 and Android 10. The combination of these two provides you with enough features that you’d expect on a tablet. You’ll find some useful features such as Quick Share, media control among your other Samsung devices, SmartThing/Bluetooth device control, and call & text right in the notification bar. However, to use the call and text feature you’ll require another galaxy smartphone logged in with the same Samsung Account.

One expects brilliant multitasking features on a tablet because that’s probably why you get one, right? And this device offers you some of the most essential features such as a split-screen and pop-up view. They all work smoothly and you won’t experience a lag in performance.

I was keen to test out how the 3GB RAM complements the Snapdragon 662 processor. It does hold back the processor a bit, but for the most part, you’ll have no complaints about the performance.

There was some delay while launching the apps and in general, I felt that there was a hint of lag in the animation, however, that’s about it. Once the app launches, everything works smoothly. It can keep up with your day to day tasks such as surfing the web, watching videos on YouTube, attending online classes/meetings, or catching up on the latest stories on Instagram quite easily. I had opened several tabs on Google Chrome, Facebook, Instagram, and a few other apps, and the tab was able to handle the pressure pretty well. But as mentioned earlier, I did face some delay while switching from one app to another.

If you are a fan of mobile gaming, then you will be relieved to hear that the Galaxy Tab A7 can handle heavy-duty games such as PUBG, Asphalt 9, COD, and Mobile Legends pretty well. On max settings in PUBG Mobile, i.e Balanced graphics, and medium frame rate, the gameplay is not smooth, you’ll have to deal with a lot of stuttering.

For the best result, you should opt for smooth graphics with high frame rates. As for COD and Mobile Legends, you can play to your heart’s content without any frame drops. On Asphalt 9, which is a relatively less demanding game among the ones mentioned, I experienced lags while performing rolls and overall not the smoothest of experience, but still playable.

All in all, you will not get high-end tablet smoothness while using the Tab A7, but then again it is not a high-end tablet. For performing everyday tasks and playing games, this device should be more than sufficient.

I would gladly take the trade-off between a rather dim display and a better battery life. And that’s exactly what this device provides. Modern Android devices are plagued by a lackluster battery backup, but you won’t have to worry about that issue on the Galaxy Tab A7.

Similar to the Tab S6 Lite, this device too is equipped with a 7040mAh battery. I managed to get around 13 hours while browsing through the web, and watching videos on Netflix and YouTube at 40% brightness. Throwing in some game time in between regular tasks does decrease the battery life by an hour or so, but it still great. So, no complaints on that department.

The battery lasts for a long time on this device, unfortunately, a similar time period is required to charge this device. Okay, that might be a little exaggerated statement, but honestly, charging this device to 100% took ages to complete. You surely would want to get hold of a 15W fast charger for this device because it does not ship with the device. Either that or be prepared to wait for 3 and a half hours to get the device fully charged.

The quad-speaker setup on the A7 delivers punchy, loud, and clear sound. Of course, they are not flagship-level, but in a small to medium-sized room, you’ll find that the sound reproduction is good. Even at the highest volume, the sound does not distort. There are two speakers on either side of the tablet and they have Dolby Atmos support for high-quality stereo, surround sound. Furthermore, there are 4 audio presets Auto, Movie, Music, and Voice. As the device is more suited for media consumption, I had it on Movie mode most of the time. However, I would recommend you to switch it to voice mode while attending online classes and meetings. Lastly, there’s a 3.5mm headphone jack, a rarity nowadays, on this device for those who’d prefer to use this tab with a wired earphone.

Cameras are not the strongest feature of this tab. Let’s put it this way – you won’t get Insta-worthy photographs, but the images are still passable.

The 8MP rear camera takes decent photographs in a well-lit condition, however, that’s about it.

You probably won’t be taking this tablet around on your vacations to click photographs.

Talking about the front camera, it is a 5MP shooter, placed on the center of the right-hand side bezel. This forces you to place the tablet in landscape mode while you are on a video-call. That’s probably a good thing as it increases your display angle.

This is not suited for taking high-quality selfies because the images lack sharpness and details, however, for online classes and meetings, it works just fine.

The front camera is also used for the facial recognition system. And it works perfectly. In dark rooms, the system will have a problem recognizing your face. Thus, it’s better if you turn on the option to temporarily brighten the screen while unlocking.

So, what’s our final stand about the Galaxy Tab A7? This budget Android tablet provides goods in just the right areas. Sure, it could have been a lot better if only they had provided a brighter display, but considering its battery life and fit for media consumption configuration, I’d rate this one as a go-to budget tablet. You just have to keep in mind the money you are paying for it, and you will be more than satisfied with the Galaxy Tab A7.