Samsung has launched its new smartwatches, called the Watch 4 and Watch 4 Classic back in August. These devices are the first to ship with the new Wear OS platform, co-developed by Google and Samsung. Now, the Watch 4 series has arrived in Nepal too. Here, we will be discussing the specs, features, availability, official price of the Samsung Galaxy Watch 4 and Watch 4 Classic in Nepal.

This time around, Samsung is changing the naming convention of their Galaxy Watch lineup. The sporty model, previously known as Watch Active, is now the vanilla Galaxy Watch. On the other hand, the one with the iconic rotating bezel is called Watch Classic.

Moreover, the Watch 4 series comes with Super AMOLED panels with Gorilla Glass DX+ protection on Watch 4 and Gorilla Glass DX on the Classic. Both of them are IP68 and 5 ATM certified against dust/water damage, on top of the MIL-STD-810G grade durability.

Inside, these smartwatches are powered by the new Exynos W920 SoC. It’s a 5nm chipset clocked at a dual-core CPU clocked at 1.18GHz. It replaces the Exynos 9110 that Samsung has been using in its smartwatches since 2018. The new chip has been paired with 1.5GB of RAM and 16GB of storage. It’s an upgrade from 1GB RAM and 8GB storage on previous models.

As for the software, Samsung has chosen “Wear“-based One UI Watch over its own Tizen OS. The new software comes with a new look, Google Play integration, and promises better synchronization with Galaxy smartphones. 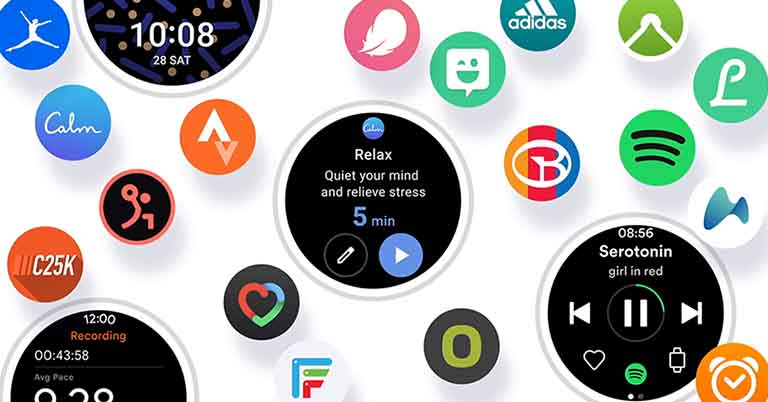 It also brings improved battery life, faster loading apps, and smoother animations. But, the practical usage will show how capable and improved the new Wear OS is.

The 40/42mm models of the Samsung Galaxy Watch 4 and Watch 4 Classic feature a 247mAh battery. On the other hand, the 44/46mm model host a bigger 361mAh battery instead. As expected, they support WPC-based wireless charging.

In terms of connectivity, the Galaxy Watch 4 series supports dual-band Wi-Fi, Bluetooth 5.0, has built-in GPS, and NFC for Samsung Pay and Google Pay. There is also be a 4G LTE variant, although that’s not available in Nepal right now.