Home Foldable Phones TCL’s foldable concept phones are “real”: One with tri-fold & the other... Back when TCL refused to extend its license agreement with BlackBerry, many speculated that TCL will now run the business under its own name. We weren’t surprised though, as TCL had been working on its own smartphone lately. However, it looks like the company is more serious about taking on the smartphone market. TCL concept foldable phones have created quite a stir in the smartphone industry because of their radical designs. One of the phones comes with a screen that can be folded thrice while the other showcases a secondary screen that slides out of the primary screen for your need of an extended screen.

Until now, the foldable concept has all been about making a phone even more portable. Most of the time we see a phablet that folds in half so that it can fit in your pocket. Contrary to that, TCL has now developed a tablet that folds thrice to take the form factor of a smartphone. You heard it right – it is a smartphone that unfolds thrice to reveal a full-sized tablet. 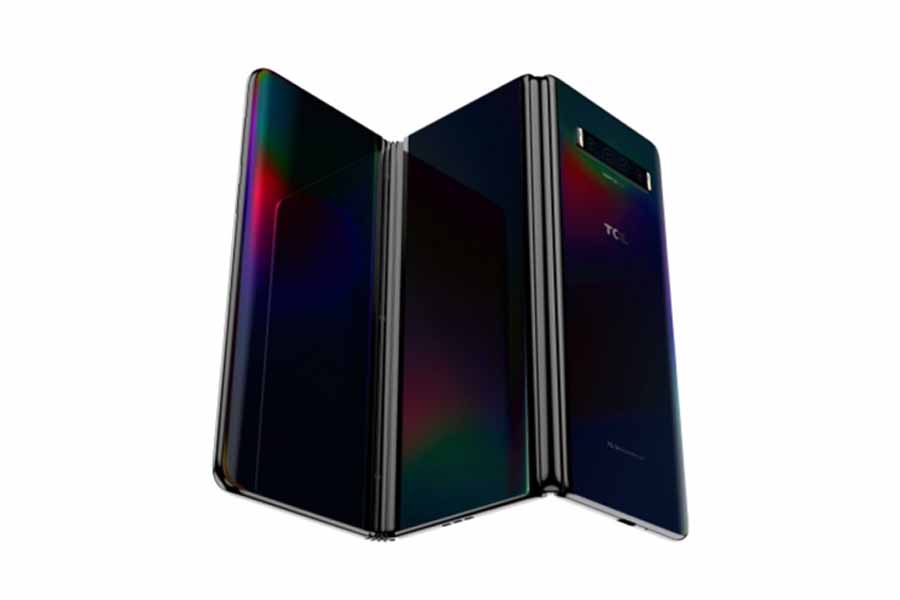 What’s more interesting is that TCL has combined the concepts of the big players in the game to make an interesting concept of its own. The tri-folding device is sort Samsung’s Galaxy Fold and Huawei’s Mate X combined into one. It has a DragonHinge that lets a part of the screen fold inside as in the Galaxy Fold while the other part folds outside like the Mate X using the Butterfly hinge. The phone can also stand on its own with the screen folded for the support – a feature that Samsung highlighted in Samsung Galaxy Z-flip.

The device uses a flexible 3K AMOLED panel developed inside the company’s screen division. The 6.5-inch screen unfolds to a 10-inch tablet. The device runs Android, however, since it is a new concept it needs a lot of modification to run smoothly on the device. Though it is quite slim for a full-sized tablet when folded it looks way too bulky for a phone. And initial reports suggest that the phone comes with different batteries to power each screen so don’t expect it to be light.

The second TCL concept foldable phone, here, first caught our attention back in February – it is a phone with screen sliding out for that extended surface area. However, TCL calls it a rollable screen and on a closer look, the screen does curve on the side. The curve is straightened out when the screen is slid out. However, unlike the former, it isn’t functional – at least for now. The units showcased by the company are all plastic prototypes for the concept of the rollable phone. The screen is a mere plastic cutout and the only thing that is working on the device is the rolling mechanism.

TCL’s vision for the phone looks interesting. TCL plans to make the rolling mechanism fully motorized that can be activated using swipe or a gesture. If TCL manages to implement it on a functional device, it will be a major breakthrough in the foldable market as it results in a creaseless device. Creases have been raising a lot of questions about durability if the present foldable devices.

Is it the future?

The concept by TCL does look promising, however, these TCL foldable concepts are not going to hit the market very soon. A lot has to be done to make the concept a reality. To begin with – the rollable phone isn’t even functional and the one that is functional needs a lot of refining on the software end. TCL also needs to find out a way to spread the overall weight of the device uniformly throughout the phone’s surface as the present design will require the company to accommodate all of the hardware at one end.

Other doubts arise from the foundation of the two concepts – hinges. The concepts will require a lot of moving parts, especially for the fully motorized rolling mechanism. A possibility of anything going wrong increases with the number of these parts. And with all the foldable devices we will have to ask if it is going to durable enough.

So what do you think of the designs? Is this the future of smartphones? Let us know with your comments.

Check out our review of the Honor MagicWatch 2!