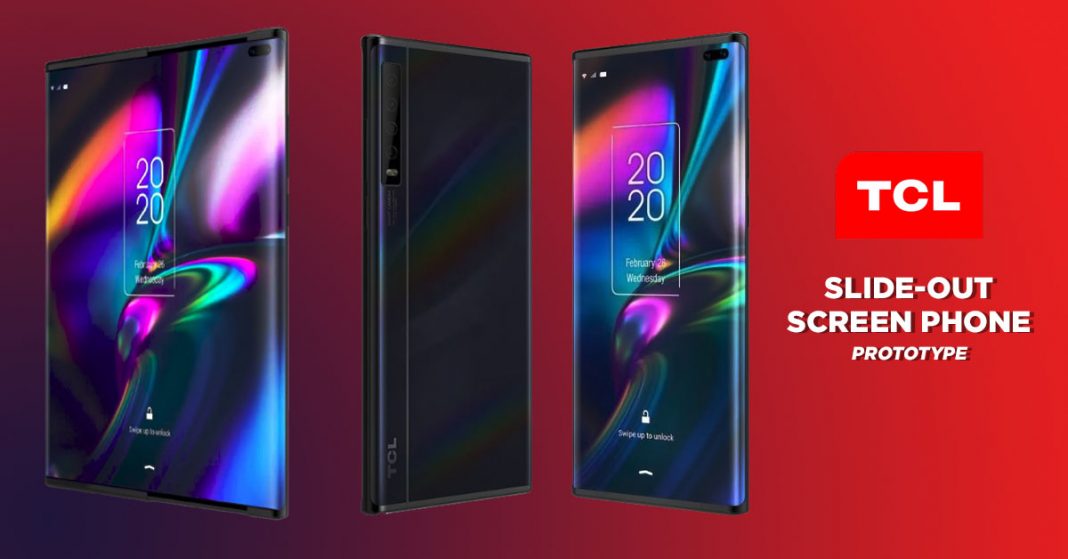 From what we have seen and heard till now, we can safely label 2020 as the year of foldable smartphones. Samsung Galaxy Fold, Motorola Razr, the more recent Galaxy Z Flip; yeah, the list goes on. These designs certainly have their flaws. However, smartphone makers are hell-bent on coming up with extended-screen smartphones. And that is where this “mysterious” TCL smartphone with slide-out screen jumps in.

TCL had previously shown its under $500 foldable smartphones at CES 2020. However, the one we are discussing today would have been on display at MWC 2020. With that out of the window, multiple leaks about the rumored phone are now surfacing on the internet.

Leaked images of the new TCL dual-screen smartphone by CNET showcase the unique design of this phone. From outside, one will not find any difference between a flagship phone and the aforementioned device.

There’s a punch-hole cutout in the screen, which most probably will house dual-selfie cameras. It is turning into a trend these days, as we’ve seen them in Poco X2 and Galaxy Note 10+ among others. However, that’s a discussion for some other day.

Coming back to the topic, on the back you’ll see vertically arranged quad-camera setup. Till now, it doesn’t seem like the device offers something out of ordinary. That’s because the real magic happens once you slide the display. Yup, that’s the method they have opted to provide the “extra” screen. Now, this device does something that I believe was the primary aim of the Galaxy Fold. However, it manages to do so by remaining slimmer and there’s no second screen on the back of the smartphone.

Right now we can’t really say how this functionality is achieved by this mysterious smartphone. The only source of our info is the leaked images. Thus, it would certainly be interesting to see this product in real.

After all, one can’t really say from the images what the actual product will look like. Yes, I’m looking at you “crease-less” Galaxy Fold!

Maybe they have gone with OLED display. I mean, they are extremely thin and thus the layer can be kept very close to one another. Still, there will be a distinct gap visible once the second screen tucks in.

Another speculation is that the display curls up underneath the primary screen. But this too would place the secondary display under some serious pressure and as a result it might break.

Thus, I was really excited to find out, how on earth have they achieved it. However, with MWC 2020 canceled, we do not know when this concept phone will actually be on display. I guess, we have no option other than to wait for a separate event to see this phone.

So what do you think of this TCL concept phone with a slide-out screen? Comment down below!