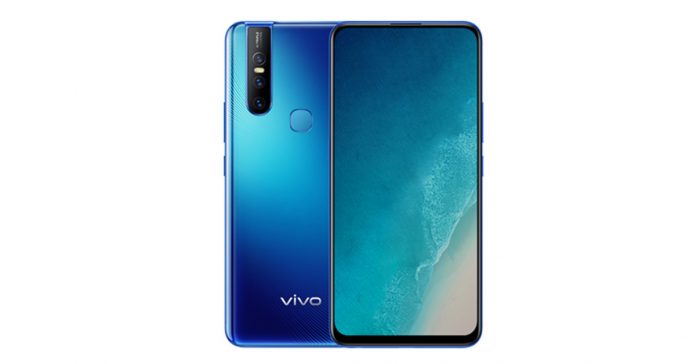 A couple of weeks ago, Vivo launched the V15 Pro in India without any announcement regarding its ‘normal’ variant. Fast forward to yesterday, the company unveiled the Vivo V15 at an event in Thailand. The V15 has cut down on a few features of the V15 Pro which was an expected move.

The Vivo V15 is a 6.53-inch device that comes with a Full HD+ FullView display. Due to the lack of a front-facing cut-out, the phone has a 91.64% screen-to-body ratio. The screen is protected by Corning Gorilla Glass 5. Underneath the hood, the Vivo V15 is powered by the octa-core MediaTek Helio P70 processor aided by 6 GB of RAM and Mali-G72 GPU. It runs on Android v9.0 Pie out of the box with Vivo’s own Fun TouchOS 9 on top.

In the camera department, the major talking point is the pop-up selfie camera that measures 32-megapixel. On the rear side, there are three cameras – 12 MP primary lens, 8-megapixel ultra-wide camera, and a 5-megapixel depth sensor. For storage purpose, Vivo has included 128 GB of internal memory on the device. What the Vivo V15 doesn’t have is the in-display fingerprint scanner. It features the traditional fingerprint sensor on the back of the device. The Vivo V15 has a large 4,000 mAh battery inside with support for dual-engine fast charging.

The Vivo V15 has launched in Malaysia and Thailand. It carries a price tag of THB 10,999 which converts to NPR 39,220. The device will make its way into the Indian market as well. So, Nepal launch might be imminent as well. The Vivo V15 Pro is launching on March 7 here in Nepal.