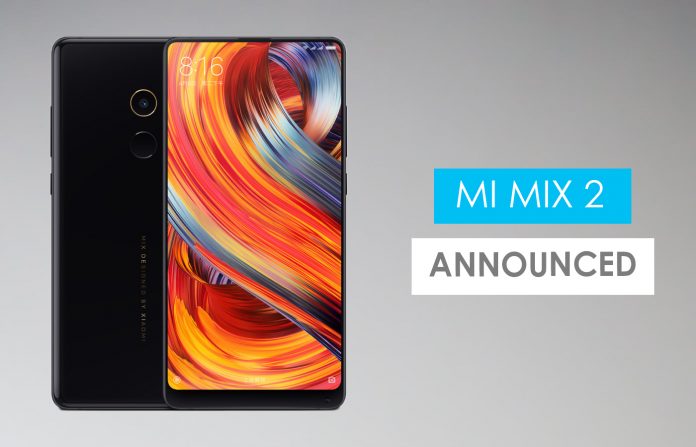 The Xiaomi MI Mix, which was launched last year was brought forward as a ‘concept phone’ with minimum bezels. The phone was offering around 84% screen-to-body ratio back then. The same device has now welcomed a sequel in the Xiaomi family. Xiaomi MI Mix 2, the follow-up model to the previous year’s concept phone has been brought to life and has been officially announced.

Although the MI Mix 2 seems to bring the reminiscence of its predecessor, it is different in its own way. Enclosed inside a stunning ceramic body, MI Mix 2 inherits a 5.99-inch IPS LCD display. Stepping up to the second iteration of MI Mix, the display size has been reduced from 6.4-inch to 5.99-inch, which has made the device very manageable. The display also embraces an 18:9 aspect ratio, which however has been seen on high-end smartphones of Samsung and LG this year.  To entice with its bezel-less charm, this bezel-less beauty embodies an 80.8% screen-to-body ratio.

Optics wise, the newbie boats a 12MP camera on the back. Though the megapixel count may seem to have a dropped value as compared to the predecessor, the performance is enhanced with the Sony IMX 386 sensor on MI Mix 2. The elegance of the rear camera is further added by the 18k gold ring around the camera. And since the bezels are removed from the top and the sides, the 5MP selfie shooter is placed on the chin of the device.

Powering the device is Snapdragon 835 chipset backed 6/8GB of RAM. On the software side, the phone is injected with Android Nougat (7.1) and the Oreo (8.0) update could be in the queue. A 3400mAh battery fuels the device, which is accompanied by Quick Charge 3.0. The presence of Quick Charge 3.0 allows the device to juice up in short bursts.

In the conversation with the Xiaomi Nepal officials, we were informed that the device could be launched before the end of 2017. And the launch of Xiaomi A1 is also in the queue, which could probably launch soon after this festive season. So it will not take forever to have your hands-on on your anticipated phone.