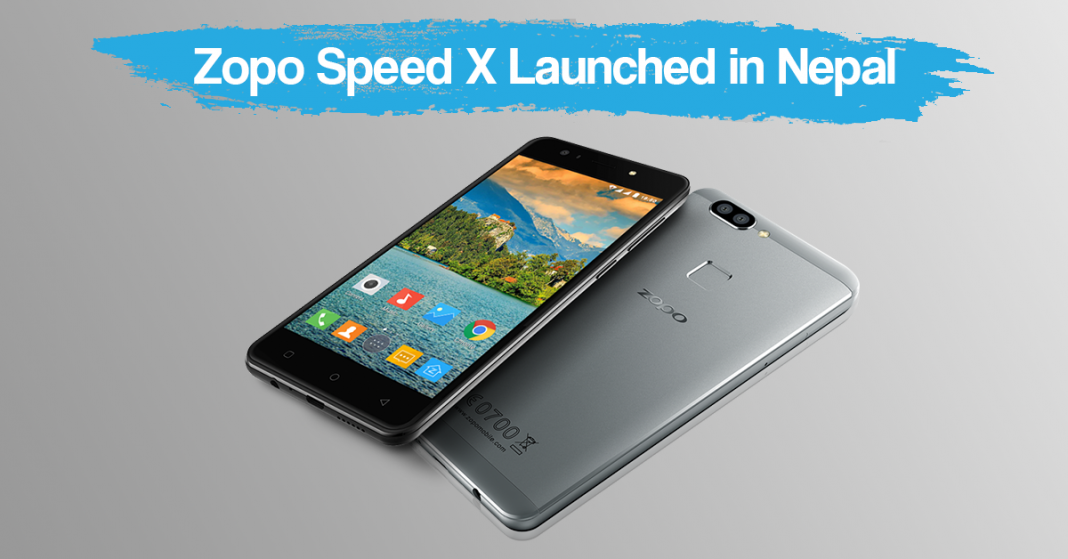 After the launch of the budget phone Zopo C3, Everest Tech Pvt. Ltd, the official distributor of Zopo mobiles in Nepal has brought a new mid-range phone, the Zopo Speed X. The phone was also recently launched worldwide and this is an instant launch here in Nepal. The Zopo Speed X comes with a sleek metal body and is priced at Rs.20,900 in Nepal.

Zopo Speed X sports a 5-inch Full HD IPS display with pixel density of 441PPI. The phone with Speed on its name is powered by the mediocre MediaTek’s MT6753 Octa-Core Processor. The chipset used has been used in a lot of other mid-range phones like the ZTE Blade V7 Lite, Infocus M680, Gionee S6s and many others. So with that processor and 3GB of RAM, the phone should be adequate for your day to day usage. For storage, the phone comes with 32GB of internal storage which can be expanded up to 128GB via Micro SD Card.

Coming down to the Camera section, the phone gets really interesting with its Dual Camera setup (13MP and 2MP shooter). The dual camera setup helps in the Bokeh effect making the background blur. Up front, the phone houses a 13MP selfie camera with f/2.0 aperture and flash. The phone is running on Android 7.0 Nougat with Zopo’s own custom UI. The phone also incorporates a fingerprint sensor on the back which Zopo claims will unlock the phones within 0.16s. The phone is backed up by a 2680mAh battery.