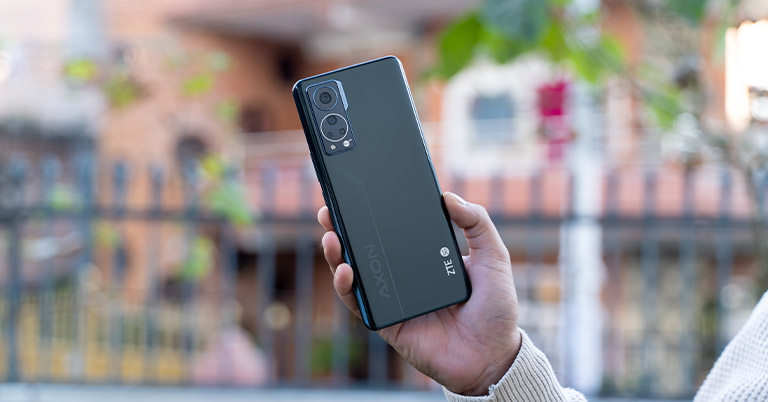 Smartphones have come a long way since their inception. We’ve seen ones that fold or flip, to those that entirely swivel out. And there’s a couple of phones that bury the camera under the screen as well. In this review, I’ll be discussing the ZTE Axon 30 5G, which is technically the world’s first phone featuring a second-gen under-display camera.

I’ve been using the Axon 30 for quite some time now—before Tihar vacations actually—which has been helpful in highlighting its perks and foibles.

With its 6.93-inch screen, there’s no denying that it’s a rather gigantic piece of tech. More impressively, ZTE has managed to keep the phone’s thickness to just 7.8mm and the weight as low as 189 grams. Plus, the weight distribution is equally balanced. But because of its sheer size, the phone won’t be as ergonomic on everyone’s hands.

Here, the Axon 30 retains the design DNA of last year’s Axon 20, with two glossy color options—Black and Aqua. I have it in black, which does look quite premium, although the back is actually made of plastic. And its glossiness means that the phone is also prone to fingerprints or smudges. So, you’ll have to keep it covered with a case to avoid the constant struggle of cleaning the back panel. Aside from this, the Axon 30 is void of any IP rating as well. Likewise, the Gorilla Glass 3 protection on display is too underwhelming for an upper mid-range phone of 2021.

Instead, the similarly priced Samsung Galaxy A52s 5G gets an IP67 rating and a Gorilla Glass 5 protection. Moreover, flipping the phone sideways to the right reveals the volume and the power button, the latter of which has a nice texture to ease identification.

On the bottom, there’s a mono speaker, a USB-C connection, and a dual SIM slot that accepts either two nano SIMs or a microSD card when used with a single SIM. Alas, there is no 3.5mm headphone jack here.

While the build quality is not Axon 30’s strongest suit, its display most surely is. The phone has the aforementioned 6.92-inch AMOLED screen with FHD+ resolution and an adaptive refresh rate of 120Hz. But this large screen real estate makes it uneasy for one-hand operation, especially for those with small hands.

Now, it’s a true full-screen display, thanks entirely to the under-display camera, which is practically invisible from a direct line of sight. Yet, one can readily steal a peek inside under direct sunlight or from certain angles. Under-display tech isn’t wholly new, and ZTE was actually the first company to pull it off for the masses with the Axon 20. I can’t help but emphasize that the pixel-dense region on the concealed camera is identical to the rest of the screen.

To make things more relatable, take the pixel topping on the Galaxy Z Fold 3 against the Axon 30. The latter has a pixel density of 400 PPI, while the former only has 144 PPI. So, shout out to ZTE!

Notch-less display aside, I am thoroughly impressed by its overall display quality. It boasts vivid colors and watching videos on this huge, disturbance-free screen is a treat too. Plus, the 120Hz refresh rate really complements the whole UI navigation experience. You can also play around with the color temperature in the settings.

Furthermore, this display also hosts an optical in-display fingerprint sensor that works well most of the time. However, with moist fingers, it fails to authenticate my fingerprints. And there’s no face unlock alternative either—so you’ll have to rely on the good ol’ password or pattern biometric options in such scenarios.

Moving on to the performance side of things, the ZTE Axon 30 is pretty good—although there are some nitpicks that I’ll talk about in a bit. The phone is powered by Snapdragon 870 5G, coupled with either 8GB or 12GB of RAM. For storage, you can choose between 128GB or 256GB. 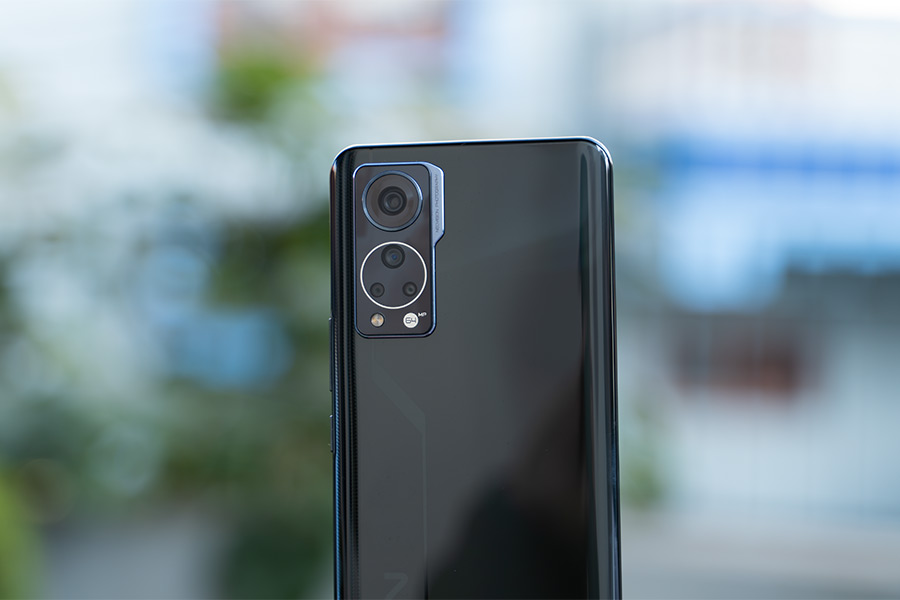 To note, my review unit of the ZTE Axon 30 has 8GB RAM and 128GB storage. And in my day-to-day testing, it didn’t break a sweat for most of my regular apps—as expected. Likewise, the 120Hz refresh rate further makes things super-snappy.

However, the software is what really needs further optimization in Axon 30. The handset boots on Android 11-based MyOS 11 with little to no extra bloatware—the exception being the Facebook and ZTE Cares app, which can’t be uninstalled.

Overall, its UI is easy to understand and the live wallpapers here are some of my personal favorites. Nonetheless, I did notice micro stutters on a couple of occasions here. 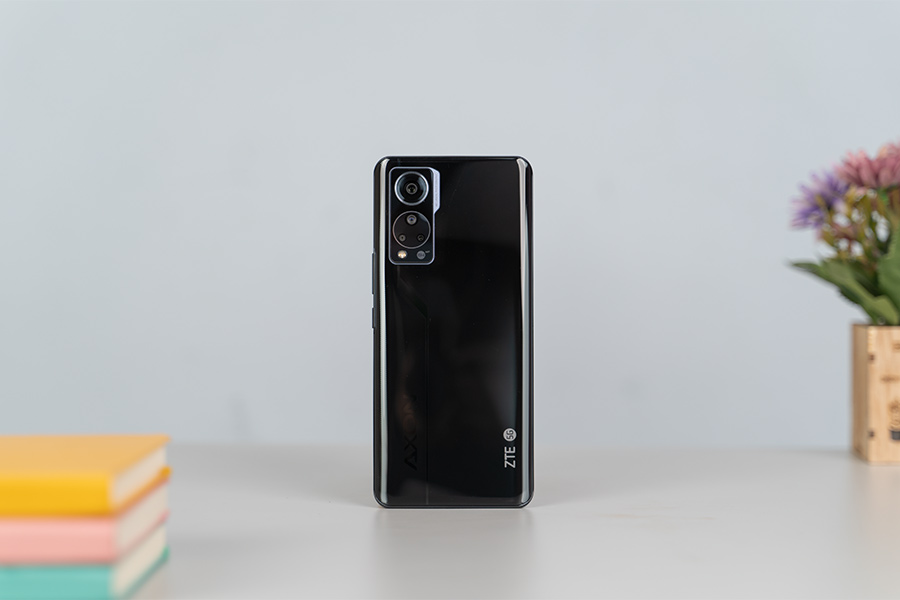 Another this is, the auto-refresh rate mechanism here reduces the frequency to 60Hz. And no matter what app you use, it never hits 120Hz. Finally, in a few cases, alerts are not shown in the notification drawer either. So I hope ZTE will soon push an update to fix these issues permanently.

That being said, gaming on this Snapdragon 870-powered phone is, as expected, fairly reliant. I tried Genshin Impact at the highest graphics settings with 60fps turned on, and the game is smoothly playable with few jitters. Moving to the cameras, the island at the back houses a 64MP Sony IMX682 main, an 8MP ultra-wide, a 5MP macro, and a 2MP depth sensor. Similarly, there’s a 16MP camera hidden inside the display.

The photos from the primary 64MP lens don’t have the punchy colors we’ve seen on Realme or Samsung phones, but are more on the natural side.

They retain a slightly warm tone but handle the exposure well enough. Likewise, the images have a good dynamic range and contrast.

The Axon 30’s ultra-wide photos, on the other hand, will not wow you. As you can see, the images have a warm/reddish tone to them, and the imaging algorithm tries too hard to control the highlights, resulting in a darker image.

On top of this, the photos are lacking in detail and the luminance of the greens is compromised too.

Similarly, it deepens the shadows in portrait shots—thereby losing details on those areas.

The edge detection here requires a lot of work, while the subject’s face looks smoothened too. It also blows out the skies in some cases.

Nonetheless, Axon 30’s normal nighttime photos have great highlights and light-glare control. Yet, the images are soft and hazy.

As usual, the night mode boosts sharpness while retaining a reasonable amount of detail. In a darker environment, this camera preserves a reasonable level of brightness, whereas the regular nighttime images look rather nice in a fairly well-lit condition.

That’s because night mode adds unnecessary exposure and sharpness to the image in a place where there is already sufficient light.

Now, I didn’t have high hopes for Axon 30’s under-display selfie camera. The images, as predicted, are soft and lacking in detail—with a hint of reddish tint as well. However, post-processing adds a good amount of sharpness, which does take some time.

Moving on, the portrait selfies fail in terms of edge detection and the images look undersaturated too.

For macros, its 5MP lens does not artificially puff up the colors, but if you can keep your hands steady, the close-up shots are passable.

As for the videos, the Axon 30 can record up to 4K 60fps footage with gyro-EIS on. However, the stabilization isn’t that great and the videos come off darker for no apparent reason. Also, it struggles to maintain constant exposure most of the time.

Furthermore, the other misery that doesn’t do a favor to this big notch-less screen is the mono speaker setup. Although the audio gets loud and the vocal sounds clear, you are nowhere near getting a stereo sound effect.

Likewise, the phone has a 4200mAh battery which isn’t that large for a 2021 phone. Nevertheless, the Axon 30 did last me through the end of the day on normal usage like scrolling through Facebook, reading a bunch of articles, and clicking some photos. 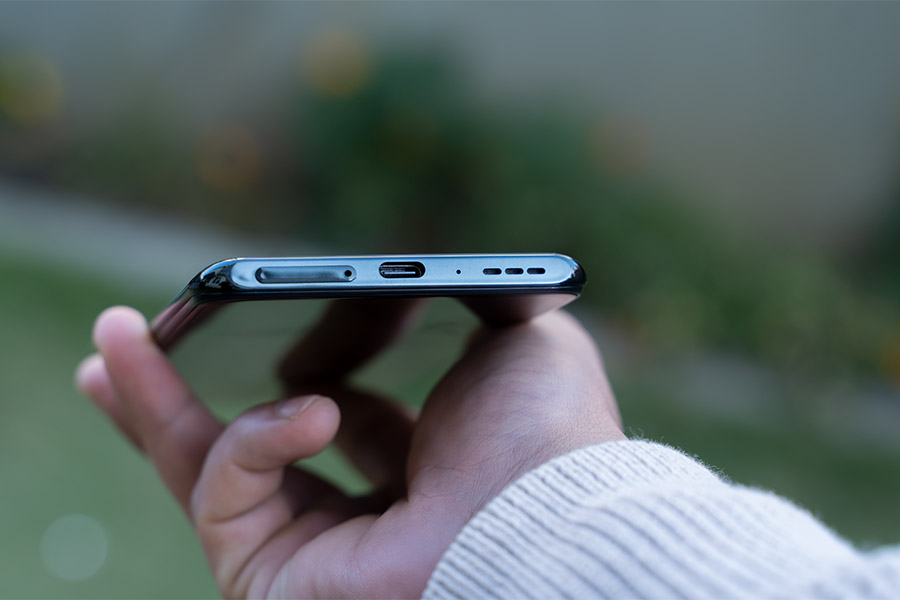 But if you’re someone who games a lot, you’ll need to juice it up twice a day. Using the 65W power adapter that comes inside the box, the phone fuels up in just 48 minutes.

Wrapping up this review, the ZTE Axon 30 has a bunch of talking points—with the star of the show being the no-notch display. It effortlessly handles everyday tasks while its battery life is no slouch either.

Despite this, I would hesitate to recommend it to someone. Especially due to its cameras. The ones on the back require further optimization whereas the front camera is abysmal when compared to regular selfie cameras. But if you’re someone who enjoys experimenting with cutting-edge technology, the Axon 30 could be worth a shot.