Besides the conventional feature upgrades—that number—the “4th gen” of it all is quite a big deal. It goes on to show just how confident Samsung is in this form factor and the company’s attestation towards making foldable mainstream. 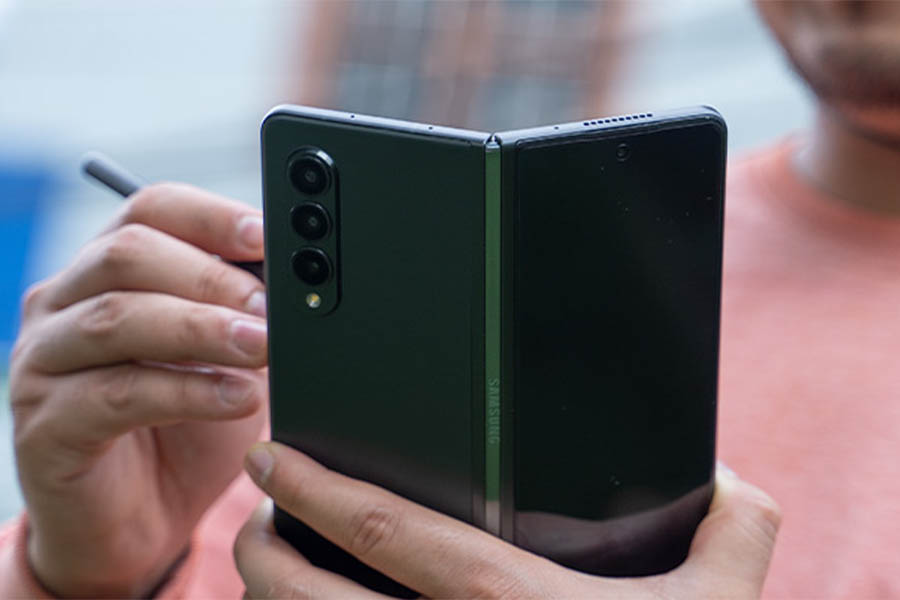 As last year’s Z Fold 2 had a pretty well-received design, Samsung hasn’t worked much to bring about any significant change on the Fold 3 in this regard. Except maybe making it a couple of millimeters thinner.

But more importantly, the company has managed to bring down the weight from 282 to just 271 grams. While that still doesn’t compare against a regular smartphone, I got used to its heft almost instantaneously—especially when holding it unfolded.

On top of this, Z Fold 3 sneaks in IPX8 water resistance as well. This makes it the only foldable phone in the market to feature an official IP rating. With all the intricate engineering that’s gone into building this phone, I’m honestly surprised as to how Samsung was able to achieve this feat.

So yeah, it’s clear that durability was one of the key areas the company focused on when designing the Z Fold 3. Compared to its predecessor, the hideaway hinge and frame enjoys armored aluminum material that promises 10% better sturdiness.

Additionally, both the cover display and the back are now protected by Corning’s Gorilla Glass Victus. Contrary to it, Samsung had cheaped out on the Fold 2 by going with Gorilla Glass 6 at the back. Moving on, the Galaxy Z Fold 3 has been tested to withstand up to 200,000 folds, much like the one before it. To put that into context, averaging 100 un/folds a day, this hinge is engineered to endure for well over 5 years.

Likewise, Samsung lets you choose from three color options: Phantom Green, Phantom Black, and Phantom Silver. And I gotta say, I’m really digging this elegantly subtle greenish hue on the Phantom Green variant that I have with me. There’s also a Galaxy Z Fold 3 Thom Browne Edition, but its availability will be limited to select markets like the US.

Because of its similar dimensions to the Z Fold 2, the display size has stayed the same here. You’re getting a 6.2” screen on the front that unfolds to a 7.6” Dynamic AMOLED display.

However, Samsung has heard our cries about the Fold’s 2 “continuity error” because of the mismatched refresh rate between two screens. As a result, the Galaxy Z Fold 3 implements a 120Hz refresh rate on both displays—albeit with a minute difference. While the main display uses an LTPO backplane with a variable refresh rate between 10 and 120Hz, the cover screen skips this lavishness for a traditional AMOLED panel that can circle between 60 and 120Hz depending on the screen’s content.

As expected, the colors and contrast levels from a Samsung-made OLED display are unquestionably top-notch and during my brief time with the phone, I’ve had no issue with it so far. Since a foldable phone quite literally hinges on the tenacity of the flexible display, ensuring its reliability and tip-top endurance is crucial.

Keeping that in mind, Samsung says it has optimized the panel structure and used a different kind of protective film on the Fold 3. All of this cumulatively deliver 80% superior durability compared to Fold 2’s main display.

Mostly known for its scratch-resistant properties, I believe Samsung’s decision to ditch TPU (Thermoplastic Polyurethane) in favor of PET (Polyethylene Terephthalate) also has something to do with the phone’s S Pen support.

Yes, you heard that right. The Galaxy Z Fold 3 is also the first foldable phone that enables stylus input. Since TPU material is comparatively softer, it makes for a relatively worse surface to write on. Additionally, the difference between the two is palpable as Fold 3’s main display doesn’t feel nearly as plasticky as the one on Fold 2. Nonetheless, because the Ultra-Thin Glass (UTG) on this phone is nowhere near as strong as regular glass, Samsung has had to develop an entirely different S Pen just for the Fold 3. The S Pen Fold Edition is a Bluetooth-free stylus with an excellent input latency, which feels closer to 9ms like on the Galaxy Note 20 Ultra. But don’t quote me on that just yet.

There’s also a larger S Pen Pro, which is a Bluetooth-enabled active stylus with support for air gestures. On a grand scale, it even seems that Samsung is desperately betting on the Fold 3 and S21 Ultra to fill up the void left by the lack of a Galaxy Note device this year—thanks to their stylus support.

Regardless, one interesting thing I discovered is that the Z Fold 3 explicitly won’t let you use a stylus other than the S Pen Pro and S Pen Fold Edition on its main display. Trying it out with Galaxy Tab S7 FE’s stylus, we were greeted with a pop-up message warning us against doing so.

Moving on, do you feel something missing when looking at this screen? Nabbing another “world’s first” title to its name, the Fold 3 brings an under-display camera (UDC) as well. To note, there are already a couple of commercially available phones with UDC like the new MIX 4 from Xiaomi, but this is the first foldable phone to include one.

Sadly, Samsung’s first take on an under-display camera leaves much to be desired. From the couple of photos that I’ve managed to take, I’ve found that this 4MP sensor captures sub-par images with incredibly low details. To top it all off, its pixel density is weak enough for one’s eye to notice the camera zone too.

Nevertheless, the UDC is practically invisible when there’s something dark occupying the screen. Besides, I observed it to sort of blend away when looking at the phone upright—similar to the crease in the middle of the screen.

While Samsung dared to go for a new camera setup for the front camera, it has left the remaining camera arrangement untouched from the Fold 2. This consists of a trio of 12MP sensors at the back, including OIS support for the wide and telephoto camera, whereas the ultra-wide lens misses out on optical stabilization.

For visible differentiation, Fold 3 incorporates an oblong-shaped camera module which is quite unique for a Samsung phone. Similarly, the cover display hosts a 10MP selfie shooter.

Judging from the few samples I’ve taken so far, the photos bear a classic Samsung tag with punchy colors and plenty of details. But I’ll be testing them at length in our full review, so be sure to check that out.

Apart from all the hardware marvel, this relatively novel smartphone form factor requires equally competent software to go with it. Thankfully, Samsung has stepped up its software game big time.

According to the company, 57 out of the top 100 apps have been optimized to utilize Fold 3’s main display to the fullest. These include the likes of YouTube, Spotify, MS Office, TikTok, etc. Even Instagram can now go fullscreen here. Also, One UI 3.1 embeds one-handed usability design principles exceptionally well. It makes the most out of the large screen real-estate by letting you open up to three apps at a time—on top of the floating windows. Flex Mode is yet another ingenious software feature that’s seen as a healthy upgrade.

This was only available in select system apps like Camera on Fold 2. Whereas, One UI 3.1 now lets you turn it on even for third-party apps. Anyway, powering the Z Fold 3 is Qualcomm’s Snapdragon 888, paired with 12GB of LPDDR5 RAM and either 256 or 512GB of UFS 3.1 storage.

So, the performance standard is not going to be a problem here. In terms of audio, there’s a dual stereo speaker setup with Dolby Atmos support. It can get plenty loud with a fair amount of details as well. 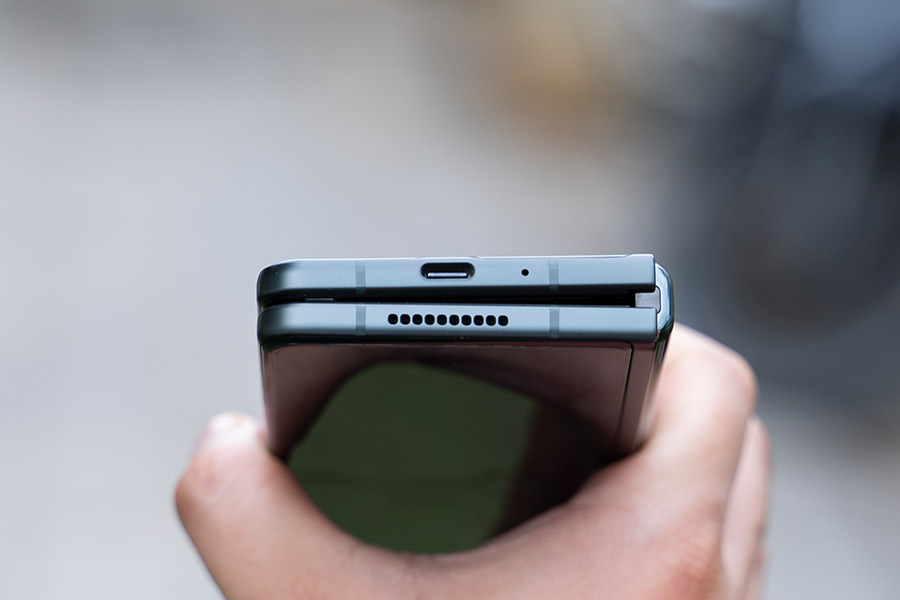 Now, remember how I praised Samsung for being able to bring down the phone’s weight? That is, indeed, a direct result of the smaller battery. Compared to the 4500mAh cell on the Fold 2, its successor has a 4400mAh battery. Meanwhile, the charging standard remains the same at 25W wired, 10W wireless, and 4.5W reverse wireless.

So, that was it for my initial impressions of the Samsung Galaxy Z Fold 3. Like I mentioned before, we will also be coming up with its full review, so stay tuned for that. Till then, look out for our impressions on the Galaxy Z Flip 3, Watch 4 series, and the Buds 2 as well.