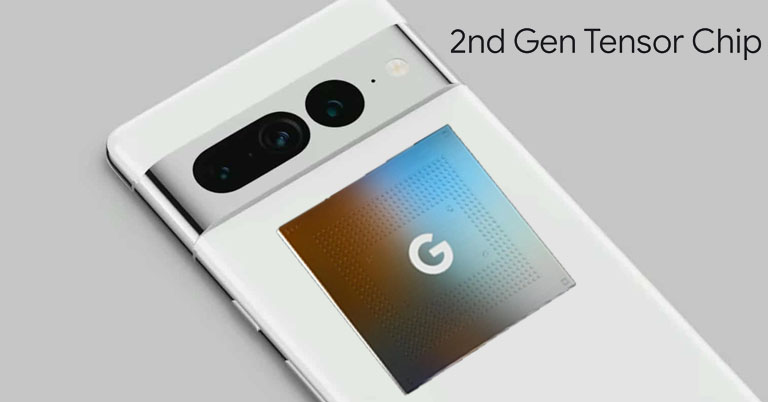 Last month, Google officially announced the upcoming Pixel 7 and Pixel 7 Pro. As per reports, the Pixel 7 series will be powered by a new Tensor chip. Like its predecessor, the 2nd Gen Google Tensor will be manufactured by Samsung. In this article, we will be discussing everything we know so far about the next-gen Google Tensor chip.

The latest news about the 2nd Gen Tensor chip comes from the Korean news outlet Digital Daily. According to their sources, Samsung has already secured orders from Google for the production of the next-gen Tensor chip. To recall, it was Samsung that fabricated the first Tensor chip for the Google Pixel 6 Series.

While the original chip was based on a 5nm process, its successor will be built on top of Samsung’s 4nm process. With the use of a narrower process, the second-gen Google Tensor chip should bring some improvement in power efficiency.

Power efficiency was among the major concerns for Google while designing the Tensor chip. The company even opted for CPU cores based on older ARMv8 architecture for the same.

Google did not go for raw performance but invested heavily in the Machine Learning and AI capability of the chip. It is possible that the 2nd Gen Tensor chip will be heading the same way.

Google’s next Tensor chip will make use of PLP packaging technology. As per the report, PLP minimizes discarded edges when cutting chips from silicon wafers. This brings down the cost of each chip while also improving productivity.

Samsung is remarkably close to sealing a deal with Google for manufacturing chips for the latter’s servers. The South Korean foundry is already supplying DRAM and NAND Flash chips to Google, as well as chips for Waymo’s self-autonomous vehicles.

Mass production of the 2nd Gen Google Tensor chip will start in June, whereas the first phones powered by the chip will be available in October.