Home Google Google Pixel 6 series is here with the custom Tensor chip and... After months of wait, Google has finally pulled the curtains off the Pixel 6 series—with the main highlight of the show being the new custom Tensor System on a Chip (SoC). So, let’s walk through the specs, features, expected price, and availability of Google Pixel 6 and Pixel 6 Pro in Nepal.

As evident from all the rumors and leaks, the Pixel 6 series has a huge camera bar on the back that runs through the full width of the phone. Both devices come with a glossy glass back (Gorilla Glass 6) and an aluminum frame. However, the frame on the Pro model is polished whereas it is matte textured on the vanilla model.

Over on the front, Pixel 6 Pro comes with a slightly curved 6.7-inch QHD+ AMOLED panel with variable refresh up to 120Hz. The Pixel 6, on the other hand, settles for a smaller and less sharp 6.4-inch FHD+ OLED screen that lays flat entirely. The refresh rate is also capped at 90Hz here.

Other than that, both of them can produce about 16 million colors. The display has support for HDR and is protected by Corning’s Gorilla Glass Victus.

Pixel 6 and 6 Pro are debuting with the Google-made Tensor SoC. The chipset takes its name from the Tensor Processing Units (TPU) used in the company’s data centers.

Tensor is a custom chip designed specifically for Google devices. It is the first processor to come with two Cortex-X1 cores. The rest of the CPU cluster consists of four Cortex-A76 and four Cortex-A55 cores. With this architecture, Google is compromising single-threaded benchmark performance for more responsive and efficient high-performance. According to the company, the major rationale for investing in its own processor is to develop AI (Artificial Intelligence) and ML (Machine Learning) capabilities in ways that off-the-shelf components could not. This will mostly be noticeable in on-device voice commands, translation, captioning, and dictation. 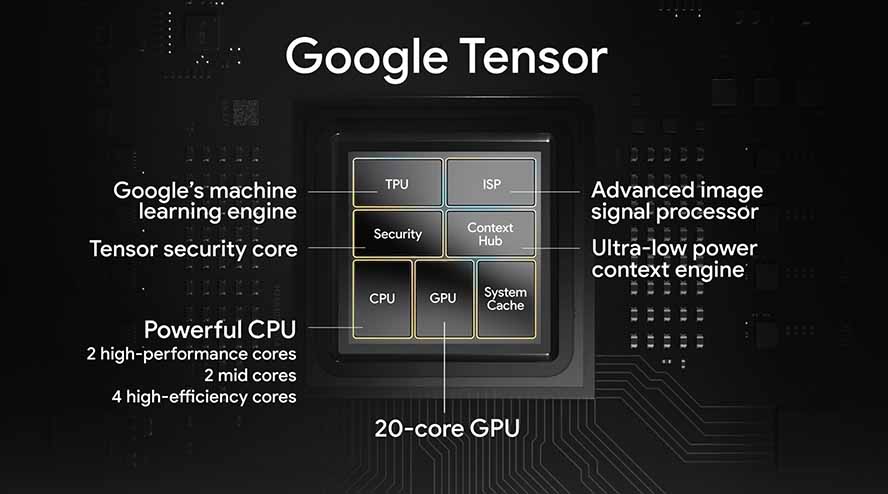 For instance, Google claims that the Tensor chip has the most accurate automatic speech recognition from Google for services like Assistant, Gboard, and Translate.

It also enables features like Motion Mode, Face Detection, Live Translation, and many other ML tasks with better efficiency than previous Pixel phones.

Before you worry about the cameras, Google is finally shying away from the 12.2MP Sony IMX363 for the Pixel 6 series. The company had been relying on this sensor from the days of the Pixel 3 lineup launched way back in 2018.

As a result, the Pixel 6 and 6 Pro feature a 50MP primary sensor that outputs 12.5MP images natively. Each pixel is 1.2μm wide and can capture 150% more light than the predecessor. The primary sensor even supports Laser Detect Auto Focus and Optical Image Stabilization (OIS). 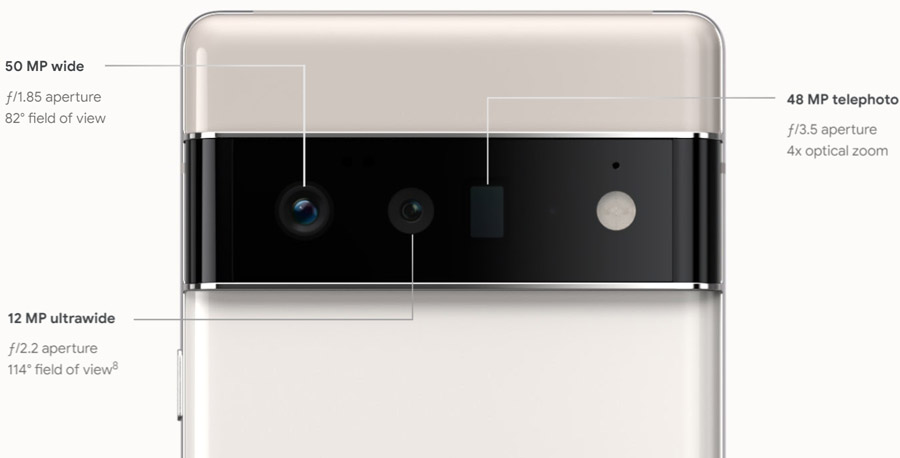 Accompanying the main sensor is a 12MP ultrawide camera with a 114º Field of View (FOV). The Pro model has a third sensor in the form of a 48MP telephoto lens with 4x optical zoom. Upfront, the Pixel 6 Pro features an 11.1MP selfie camera whereas the vanilla model settles for an 8MP shooter.

Moreover, the Pixel 6 series comes with multiple new camera features including the Magic Eraser tool that can get rid of unwanted elements of an image, a new long-exposure mode, and the Motion Blur capture mode. Both phones are capable of recording up to 4K/60fps videos and 1080p/240fps slow-mo videos.

Similarly, thanks to the new Tensor chip, Google is able to expand its HDR+ algorithm to videos as well. The new HDRnet feature can stack exposures for every single frame of a 4K/60fps video.

Additionally, the aforementioned face unblur feature will activate the second camera whenever the viewfinder detects a face with motion blur. The two photos will then be aligned and merged for a blur-free image.

In terms of battery, Google has packed the Pixel 6 Pro with a 5,003mAh cell. The vanilla Pixel 6 being a smaller phone could only accommodate a 4,614mAh battery. Still, Google claims 24 hours battery life on both of them. They support wired charging speeds of up to 30W. However, you won’t find a compatible power adapter inside the box.

As for connectivity, these phones support 5G, Wi-Fi 6, and Bluetooth 5.2. The Pro model even brings Ultra-Wideband (UWB) and mmWave 5G compatibility. Yet, the mmWave 5G is only available in select Pixel 6 in the US sold by Verizon.

Pixel 6 series is available for pre-order in the US and Europe. The price starts at USD 599 for Pixel 6 and USD 899 for the Pro model. Although they’re unlikely to launch here, we expect the price of Google Pixel 6 and 6 Pro in Nepal to start at NPR 85,000 and NPR 130,000, respectively if they do.