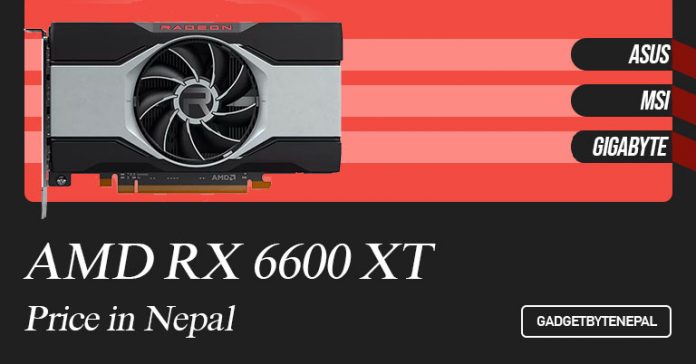 AMD added the RX 6600 XT to its Radeon RX 6000 series back in July 2021. It is based on the company’s RDNA 2 microarchitecture but comes with a much cheaper price tag. Here, we will be looking at the specs and features of AMD Radeon RX 6600 XT graphics cards, along with its price in Nepal and availability.

AMD Radeon RX 6600 XT has 32 compute units and 2048 stream processors. It utilizes the new Navi 23 GPU instead of the Navi 21 and Navi 22 that we have seen on other cards in the series.

You also get an AMD FidelityFX suite of technologies that includes Super Resolution. It is now supported by over 50 gaming titles and game engines. Developers can now make use of the open-source platform from GPUOpen. Other features available on the RX 6600 XT include AMD Smart Access Memory (SAM), Radeon Anti-Lag, and Radeon Boost.

AMD says the RX 6600 XT is optimized for 1080p gameplay on modern titles. This puts it in competition with NVIDIA’s GeForce RTX 3060. According to AMD, this card outperforms the closest competition by an average of 15%. Besides the price of AMD Radeon RX 6600 XT graphics cards in Nepal, you might also be interested in: