Apple announced a lot of new products at the “Far Out” event held yesterday. Including four new iPhones, three smartwatches, and a pair of wireless earbuds. And in terms of smartwatches, the new second-gen Apple Watch SE is the company’s most affordable wearable option available right now since Apple has now discontinued the Watch Series 3. It brings a few incremental upgrades over the original Apple Watch SE—most notably in the performance department. So let’s take a closer look at the all-new Apple Watch SE 2022, including its official specs, features, availability, and expected price in Nepal.

As far as design is concerned, the 2nd generation Watch SE isn’t that different from its predecessor. It still arrives in the familiar square chassis with the digital crown and a side button on the right frame. In 40mm and 44mm (100% recycled) aluminum cases. But Apple says it has redesigned the back case this time, which is now made of color-matched nylon composite material for a (marginally) lighter build quality.

As for the color options, the Watch SE 2022 is available in Midnight, Starlight, and Silver finishes. There’s nothing new in the display side of things though. It’s still got the same Retina LTPO OLED screen with up to 1000 nits of brightness. And unlike Apple’s more premium smartwatches, this guy still doesn’t support always-on display. For crack and scratch resistance, there’s the usual Ion-X glass on top of the screen. It is also swimproof up to 50 meters, but you won’t find dust-resistant properties on this entry-level Apple smartwatch.

Besides raw power, the cellular version of the new Watch SE now supports international data roaming as well. Apple says this feature is currently compatible with 30 telcos in total—chiefly the ones from the US, UK, and China. 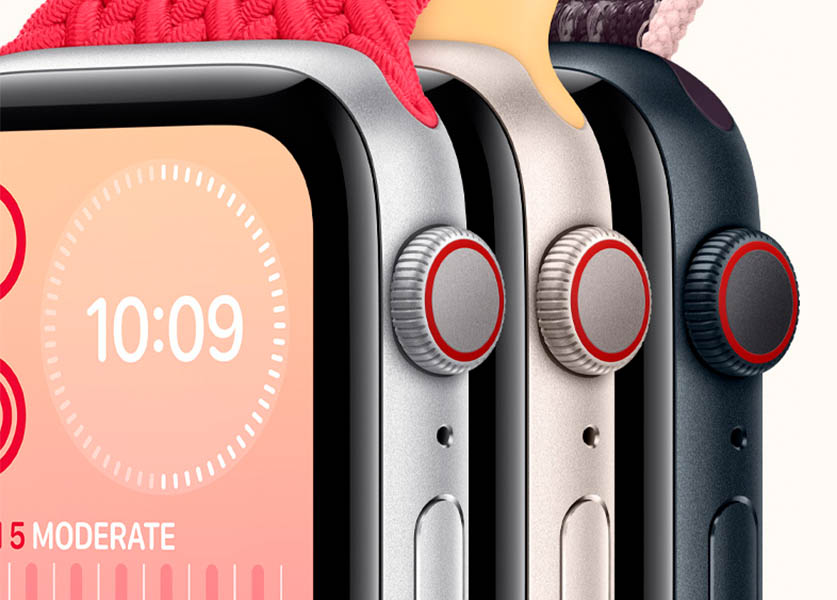 Interestingly, the Watch SE can also detect a car crash and connect you to emergency services or emergency contacts. According to Apple, this feature is enabled thanks to the enhanced 3-axis gyroscope and G-force accelerometer in tandem with the onboard microphone, barometer, and GPS. In terms of health and fitness tracking, this guy comes loaded with most features available on other high-end Apple smartwatches. Except for blood oxygen and ECG measurements. Or skin temperature found on the more expensive Watch Series 8 and Watch Ultra. Other than this, you can still track your heart rate, menstrual cycles, and a bunch of workout modes. By the way, you also get 3 months of Apple Fitness+ subscription with the purchase of Watch SE 2022.

Like most other things, battery life remains the same too. Apple quotes 18 hours of usage here. Unfortunately, it doesn’t support fast charging, which means you gotta wait for 2 and a half hours for a full charge. As for connectivity, the 2nd generation Watch SE comes with Bluetooth 5.0 and 2.4GHz WiFi.

The 2nd generation Apple Watch SE 2022 costs USD 249 and USD 299 for the GPS and the cellular model, respectively. Surprisingly enough, that’s USD 30 less than what the original Watch SE went for. As such, we expect the price of the Apple Watch SE 2022 in Nepal to start at NPR 45,000 when it launches here shortly.