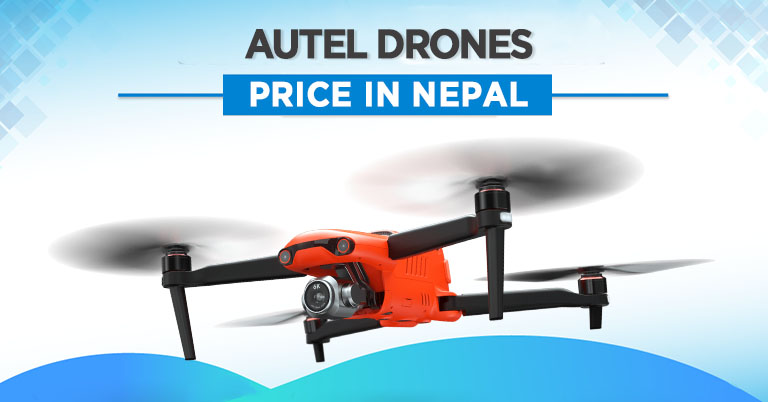 Autel is not the first name that comes to mind when you think of drones. However, the company has been positioned as an alternative to the DJI in the drone market. And now, Autel drones are available in Nepal via Oliz Store. In this post, we will be talking in brief about Autel and the drones that are available in Nepal including their price, specs, and other info.

As mentioned earlier, Autel is a brand that specializes in intelligent automotive systems and automotive electronics components. Formally known as the Autel Intelligent Technology Corp, the company has multiple child companies under its wing. One such is Autel Robotics that was founded in 2014.

Autel Robotics specializes in unmanned aerial technologies. It develops drones for both hobbyists and professionals. The company debuted the X-Star in 2015 which was then followed by the EVO series. Last year, the company also unveiled the EVO II series.

While the parent company is headquartered in Shenzhen China, the same neighborhood as DJI, Autel Robotics is based in Washington, USA. Given the recent advancement in the US-China relation, the company even introduced “Made in US” drones under the EVO II platform.

The Autel EVO II comes with Sony’s 48MP sensor. It is capable of recording 4K HDR videos with 16 Exposure Values. The 10-bit color depth allows the drone to capture over 1 billion colors. In addition, users can shoot in 8K under the Hyperlapse Mode.

It is equipped with 19 sensors out of which 12 help in obstacle avoidance. EVO II can track objects in motion with its Phase Detection AF. It can also detect up to 64 objects at the same time.

The drone can fly at a maximum speed of 45mph. The maximum flight time is listed at 40 minutes. Similarly, the maximum transmission range is 5.5km.

Moving on, the EVO II Pro is the first folding drone from the company that can shoot in 6K resolution. It features a 20MP Sony CMOS sensor. Users can adjust the aperture between f/2.8 to f/11. Similarly, the ISO can be dialed up to 12,800. As with the EVO II 8K, it can also capture over 1 billion colors because of the 10-bit color support. There is the HyperLight feature with 2D and 3D noise-reducing technologies for low-light photography.

The price of Autel EVO II and EVO II PRO in Nepal is NPR 216,000 and NPR 255,000, respectively. You can buy Autel drones in Nepal at their respective price from Oliz Store.