A few weeks ago, Huawei officially teased the arrival of its second-generation folding smartphone, the Mate X2. To recall, 2019’s Mate X was the first foldable from the company. There was the Huawei Mate Xs as well but it was not that big of an upgrade from the first-gen Mate X. In this post, we will be talking about the new Huawei Mate X2 along with its specs, features, price, and availability.

The new Huawei Mate X2 has been designed from the ground up. Its wedge design means the thickness of the phone is not uniform. At its thinnest part, the phone measures just 4.4mm. Huawei claims that the new design makes the phone light and more comfortable to hold.

Its hinge is made from zirconium-based liquid metal and carbon fiber panels. Because of the new hinge, the phone can be folded seamlessly. That is, you won’t see any gap between the two half when folded.

Moving ahead, Mate X2 has an inward folding mechanism. Both the Mate X and Mate Xs before it had an outward folding screen. In order to make the phone usable in the folded state, Huawei has included a secondary screen on the outside. 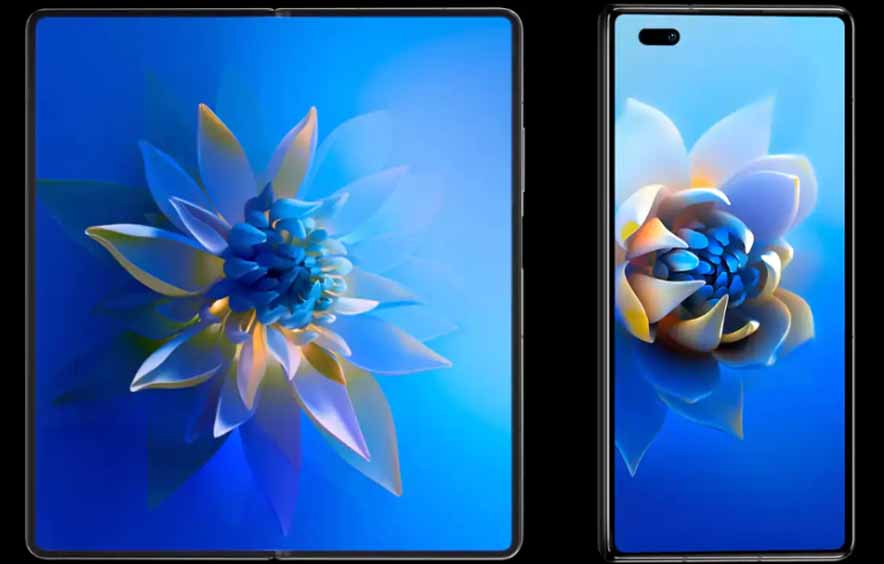 Also, the internal screen is void of any kind of notch and cutouts whereas the secondary screen has a pill-shaped cut-out for a dual-selfie camera.

The phone is powered by Huawei’s in-house Kirin 9000 5G SoC. This chipset is based on a 5nm process node and features over 15 billion transistors. The graphics and image processing is handled by the 24-core Mali-G78 GPU. It chipset also has an improved NPU for AI tasks.

As for the software, the phone will ship with Huawei’s EMUI 11.0 based on Android 10. Users will have to do without Google Mobile Services. The Chinese audience may not have a problem with it but if the phone were to launch elsewhere it will turn out to be a deal-breaker for many. The phone will be among the first to receive the HarmanyOS update starting next month. 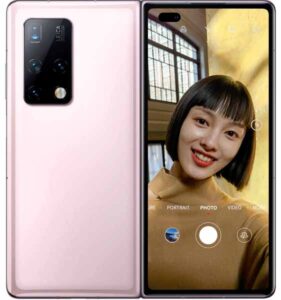 At the back, the rectangular camera bump is housing the Ultra Vision Leica Quad Camera setup. It features a 50MP primary camera with an f/1.9 aperture. For ultra-wide shots, the phone has a 16MP Cine Camera. It also doubles as a macro lens (2.5cm). Completing the setup is two zoom lenses offering 3x and 10x optical zoom respectively. The latter even supports AF. Every sensor except the ultrawide features optical image stabilization.

There is a 16MP selfie camera enclosed by the pill-shaped camera cutout on the secondary screen. You can even use the rear camera sensor to take selfies. Huawei recommends doing so while taking group selfies and under low light condition

Fueling the device is a moderate 4500mAh battery. The phone supports 55W Huawei SuperCharge for faster refilling. In terms of connectivity, you get support for Wi-Fi 6, Bluetooth 5.2, USB 3.1 Gen, and NFC. It has a stereo sound setup tuned by Histen. The phone has a smart 5G Antenna system that promises good network reception irrespective of how you hold the phone.

Huawei Mate X2 will be available in China starting February 25 for a starting price of 17,999 Yuan for the 256GB variant, while the 512GB option costs 18,999 Yuan. As of now, there is no news about the international availability of Huawei Mate X2.