Home Apple iPhone 7 and iPhone 7 Plus Launched in Apple’s Event in San...

Forget all the rumors, the new iPhone 7 is here. Apple has officially announced the iPhone 7 and iPhone 7 Plus during the Apple’s Event held in Bill Graham Civic Auditorium, San Francisco. According to Apple, the iPhone 7 pre-order start from September 9 will be available globally ready to be shipped from September 16.

iPhone 7 and iPhone 7 Plus in Nepal:

Price of iPhone 7 and iPhone 7 Plus in Nepal:

Even though Apple came up saying that the design has changed, but the iPhone looks same as the iPhone 6s and 6s Plus in terms of overhaul design. The iPhone 7 is 138.3 x 67.1 x 7.1 mm while the bigger iPhone is 158.2 x 77.9 x 7.3 mm in dimension. The iPhones comes in 5 colors namely Jet black, (Simply) Black, Gold, Silver, and Rose gold.  Also, the iPhones are dust and water resistant.

Apple has also removed the headphone jack and instead have  earbuds that connect through the phone’s charging port. So, no charging and listening to the music at the same time. The company also unveiled a set of wireless headphones called AirPods which you can separately purchase at extra cost. The iPhone 7 comes with a 12 MP camera with optical image stabilization and a Quad LED true tone flash. The camera with f/1.8 aperture and a six element lens to make a whole new experience. According to Apple, this technology used in the camera takes even better low light images and videos. Various features such as wide color capture will enhance the beauty of photos and live photos. The camera also has a special flickering sensor that compensates flickering of extra light from the surrounding. While the iPhone 7Plus comes with two cameras that shoot as one. The two camera both 12 MP are wide angle and telephoto lens. So with an iPhone 7 Plus it’s possible to get higher-quality zoom from farther away.

According to Apple, with the inclusion of the A10 Fusion Chip, the battery life would increase by 2 hours (14h of talk time and 40h of playback time) compared to the 6 and 6s plus for the 7 and 7 Plus. 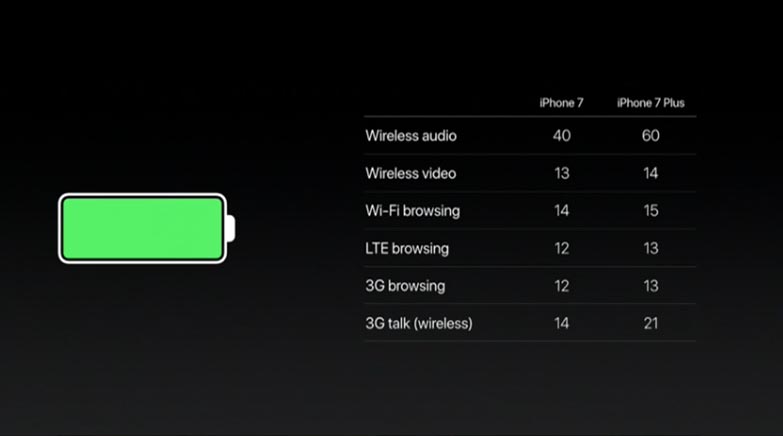 Specs of iPhone 7 Plus