Finding a good budget smartphone is cumbersome these days. To keep the prices low, compromises are made here and there. However, the Moto E4 seems quite somewhat promising in terms of specs even at the budget price point. But how will the smartphone fare in the real-life scenario? Let’s find in this Moto E4 review.

The smartphone is a miniature version of its sibling, the Moto E4 Plus. The plastic body provided with a metallic finish and the texture on the power button is barely distinguishable. However, the smartphone gives the vibe of metallic build and feels cold quite often in this chilly weather. Bezel-less displays are quite trendy these days. However, the Moto E4 has not adopted that alluring design. The smartphone has pretty generous bezels on the forehead and the chin. The forehead has been the habitat for the ambient light sensor, proximity sensor, and the earpiece. Likewise, there is a secluded fingerprint sensor on the chip. The sensor is oblong in shape and has fiercely pushed the touch buttons to the screen. There is also a notification LED on the phone but barely serves the purpose.  The only time I found the LED lit was while charging handset during the switched off condition.

And talking about the buttons, the Moto E4 has accumulated all the buttons on its right edge. With the power button positioned at an absolute middle and the volume rockers placed just above it, they are easily reachable and provide good haptic feedback on the press. On the top, there is a 3.5mm headphone jack and micro USB slot lies meticulously on the button. The speaker, on the other hand, lies on the lower back of the phone.

The smartphone possesses a 5-inch HD display with 2.5D glass on the top. The pixel density of 294PPI may not seem top-notch in the papers but on the use, the display is satisfyingly crisp and users will barely have an issue. Users would rather enjoy its smooth touchscreen crafted with 2.5D glass and a sensational oleophobic coating. Viewing angle is also fairly decent with an impressive color reproduction. To add more, the display is shielded with Gorilla glass 3 to evade the vulnerabilities regarding the scratches. However, the screen is a notorious smudge magnet and needs cleaning quite often although having an oleophobic coating. 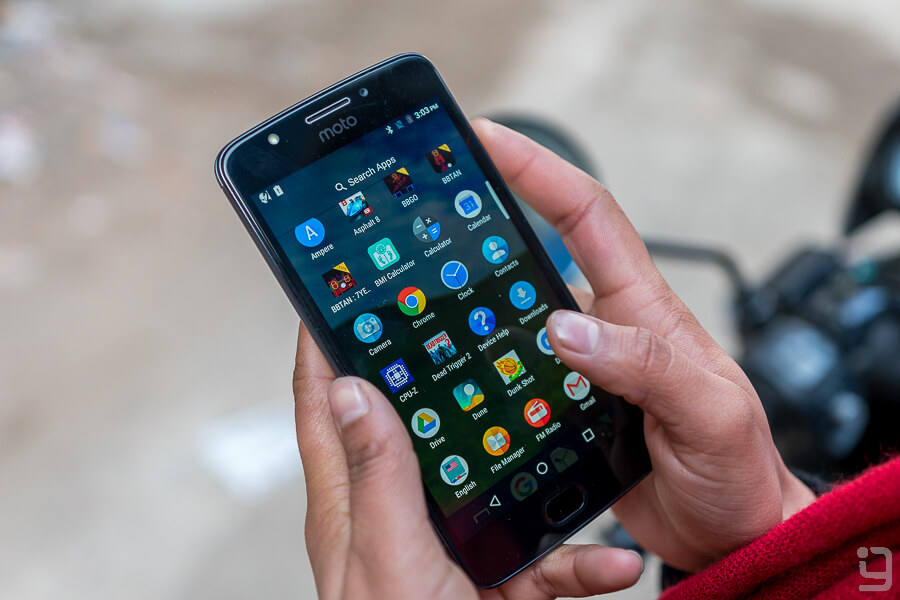 On the software side, Moto E4 is gifted with clean Android Nougat on its system. With just the home-baked Moto app on the shelf, the smartphone lacks the additional touch from the manufacturer. And this is the major advantage with the Moto E4 as the additional customizations and presence of bloatware make the device sluggish and devours the RAM and internal storage of the phone.

The Moto app has Moto actions and Moto display options inside. With the one button navigation option in the Moto action, the fingerprint sensor can be used as a trackpad to replace the on-screen buttons with gestures. There is also swipe to shrink the screen, which narrows down the content in a smaller screen and assists in single hand usability. Likewise, the Night display in the Moto display turns on the blue light filter during the night hours and helps to regulate the sleep cycle.

Moto E4 is powered by MediaTek 6737 processor aided by 2GB of RAM and 16GB of internal storage. The presence of 16GB of onboard storage is nothing out of ordinary at this price point. But the presence of a dedicated slot for the storage expansion definitely is, which lets the users boost the storage without sacrificing the SIM2 slot.

Talking about the performance, I find no issues on loading and running of light apps and games. None of the apps ever crashed or stopped with error messages. However, there was a slight delay while loading heavier games and few stutters were evident on the play. Some heavy titles like Dead Trigger 2, Into the Dead 2, and PES were still playable even with the minor hiccups. And the most praiseworthy of all was the device did not heated much even while playing the games for hours.

Talking about the camera, the smartphone gives the vibe of a camera phone with its protruded camera bump on the back and LED flash on both ends. However, on the use, I had mixed feelings about it. The 8MP camera on the back was not too shabby and took some decent shots. Photos were fine on the phone’s screen but lacked the sharpness when zoomed or viewed in larger screens. There was also decent color accuracy most of the times but in some images, I noticed yellow tints. Low light shots were satisfactory if not better. Except for few noises and grains, there were no issues on low light shots and the details within the image were easily traceable. 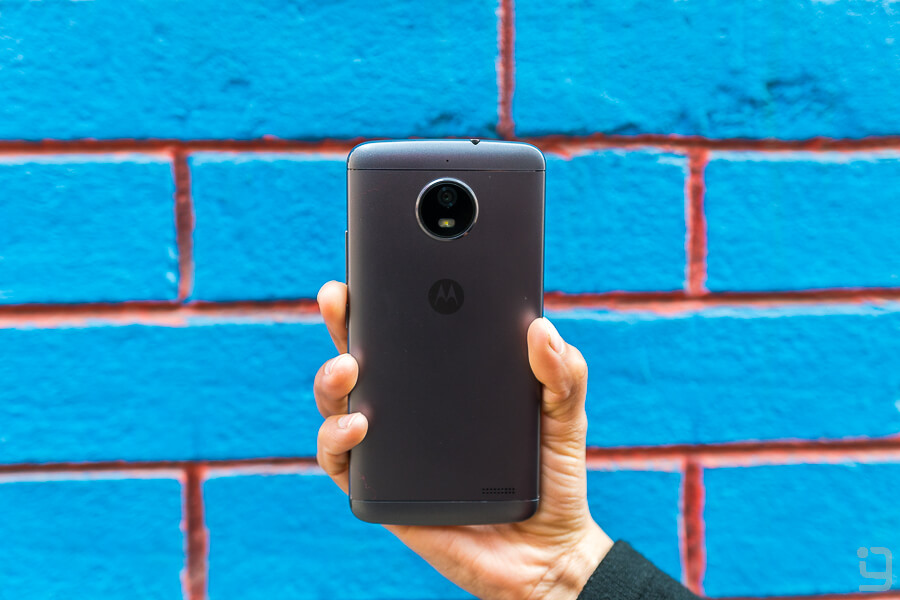 The 5MP front camera was not bad either. It pulled out some social media ready selfies without a fuss. And for the ones, who crave for the beautified selfies in the real time, there is an inbuilt beauty mode. Skin tones are made fairer and facial skins are smoothened in the beautified selfies. Such effects make you look better at times but the facial details are obliterated in most of the cases. And talking about the low light selfies, I was quite disappointed with the front LED flash because of its blinding light. Additionally, the skin looked washed out, which was pretty devastating. 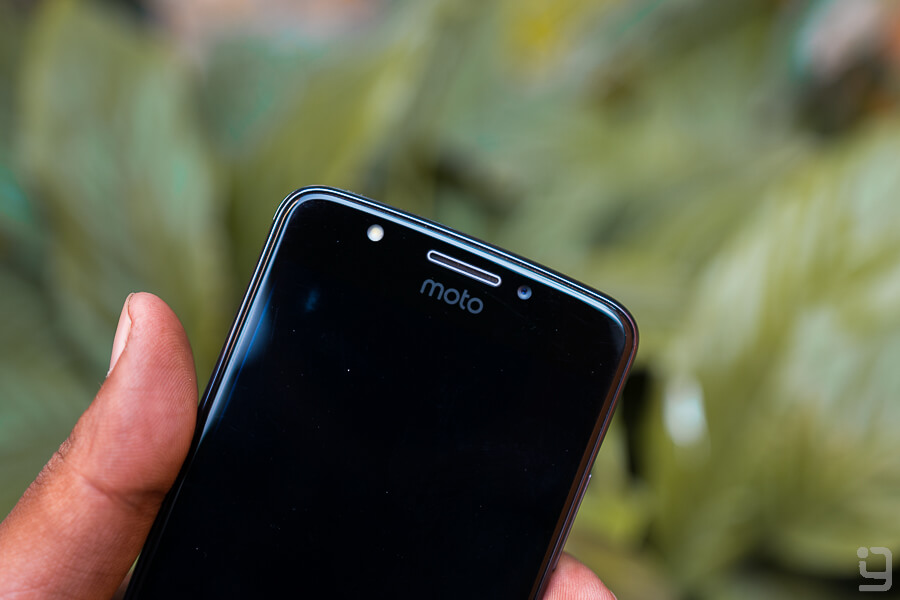 The inefficient HDR mode, sluggish autofocus and the lack of pro mode is a bummer on the phone. And in a nutshell, there is nothing to brag about the cameras in the E4.

Beneath the removable back of the Moto E4, there is a 2800mAh removable battery. On my normal daily use, the phone usually backed me up for one complete day. Back up was satisfactory to me but charging the device was a pain in the neck. Although it supports fast charging, I’m disappointed that Motorola provides a stock charger of 5V, 1A, which takes around 2 and a half hours to get it fully charged. You have to spend few extra bucks to buy a separate fast charger. I tried to charge the device with a fast charger of 5V, 2A, and the charging was fast with 0 to 100 within one and a half hour. But the fastest charge would be to buy a separate battery and swap it whenever the other is empty.

To keep the prices low, compromises are inescapable in the budget smartphones. And the Moto E4 has not broken that streak. However, considering the price, the smartphone has not opted in for middling performance on any major fields. The stock Android, sturdy design, and the inclusion of snappy fingerprint are duly remarkable. And the overall performance of the device looks balanced. A better processor and a slightly bigger battery would have been icing on the cake but nonetheless, the Moto E4 is still one of the rockstars in the arena of budget smartphones.