Home Nothing Nothing phone (1) is finally here with transparent back, Snapdragon 778G+, and... 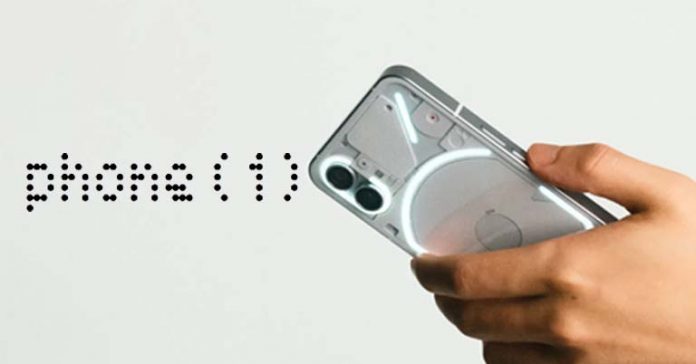 After a series of cryptic tweets and teasers, Nothing has finally taken the wraps off of the Nothing phone (1). The smartphone has gained a lot of buzz in the tech world especially because of its unique design approach. So let’s walk through every bit of detail about the specs, features, and the launch of the Nothing phone (1), including its expected price in Nepal.

Nothing phone (1) is a breath of fresh air in an age when smartphone designs have become quite generic. With its first phone, the brand is continuing the transparent design approach that it introduced with its first product, the Nothing ear (1).

While the transparent cover for the ear (1) was quite unconventional, it is not as unique in the smartphone arena since companies like Xiaomi and Nubia have already tried this formula.

It’s all about the presentation

Then again, such design choices haven’t really wooed the mainstream audience, which is why manufacturers come out with only a small batch of transparent phones. So it’s not surprising that much of Nothing’s success depends upon the presentation of the phone (1) transparent back. Nothing experimented with a bunch of designs as shared by Carl Pei via his Twitter before going with the final form.

Previously, in an interview with The Verge, Carl Pei stated that Nothing will try to emulate Dyson’s singularity-focused design. He has even convinced Dyson’s former design head, Adam Bates, to lead the design at Nothing. He will be working together with Jesper Kouthoofd and Tom Howard.

The main highlight of the Nothing phone (1)’s design is the new Glyph interface. Nothing has included a total of five lightning strips with around 900 LEDs that can work both together and as individuals to notify you of notification, incoming calls, and the charging process. 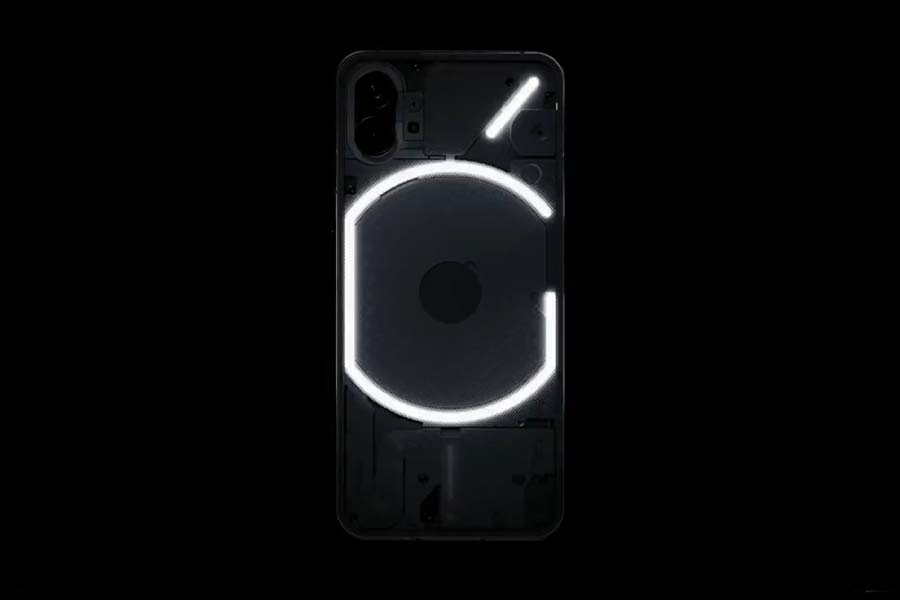 You can even customize the lighting pattern for certain contacts or notifications. Additionally, the entire rear can be illuminated at once to serve as a fill light for the cameras.

There’s more—one can even set those backlights to flash in tandem with the built-in ringtones. Users will also have the option to turn off the Glyph interface completely at a certain time of day.

phone (1)—in addition to its cool-looking transparent form—takes a sustainable design approach, with the frames made of recycled aluminum. Its front and back likewise have Gorilla Glass 5 protection. Aside from that, more than half of the plastic used in smartphones is recycled; and the company has used recycled tin for the soldering of the device’s components. The smartphone is IP53 rated for dust and splash resistance as well.

Another thing the company is really focusing on is showing off its charging coil. Yes, Nothing phone (1) supports 15W wireless charging, and it is a major part of the phone’s design as well. The phone even has 5W reverse wireless charging for your TWS earbuds and other accessories.

In terms of battery, phone (1) is fueled by a 4500mAh battery bundled along with the 33W fast charging. But the company has not included the compatible charger inside the box.

Besides a few new additions, the Snapdragon 778G Plus stays the same in terms of the core architecture. It features an eight-core CPU with four performance (ARM Cortex-A78) and four efficiency (ARM Cortex-A55) cores. Similarly, for graphics, an Adreno 642L GPU is used, as is an X53 5G modem for connectivity.

Users are expecting the phone (1) to feature the top-of-the-line 8 Gen 1 or 8+ Gen 1 processor. But according to Carl Pei, they chose a mid-range chipset because it offers a better balance of price, performance, and power consumption.

As for the software, Nothing phone (1) boots on the company’s own Android skin known as Nothing OS. The company describes its custom skin as a pure form of Android with only the “essentials”. The OS focuses on delivering a fast, smooth, and personal experience. Nothing OS even incorporates the dot-matrix design that you see on the company’s logo.

Nothing has promised 3 major OS updates and an additional year of security patches which nearly matches Google’s current commitment to the Pixel 6 lineup. A beta version of the Nothing OS Launcher is also available in the Play Store to give users a glimpse of the Nothing OS.

The Nothing OS also immerses you in the Nothing ecosystem, which includes products from its own company and those of other prominent brands. The ecosystem will allow you to control the products directly from your phone (1). So it’s hardly surprising to see that it is well-suited to their own product portfolio which currently only includes the Ear (1). In this case, the quick setting toggle on the phone (1) let you choose between ANC modes, connectivity, and other features. Aside from that, Nothing has optimized its ecosystem for Tesla cars, allowing you to connect your phone to the car and do actions like turning on the AC and lights.

We expect the company to grow its product portfolio in the future to align with its vision of the Nothing ecosystem that it plans to rival Apple. Carl Pei has also expressed his desire to blur the boundary between Nothing and its consumers. 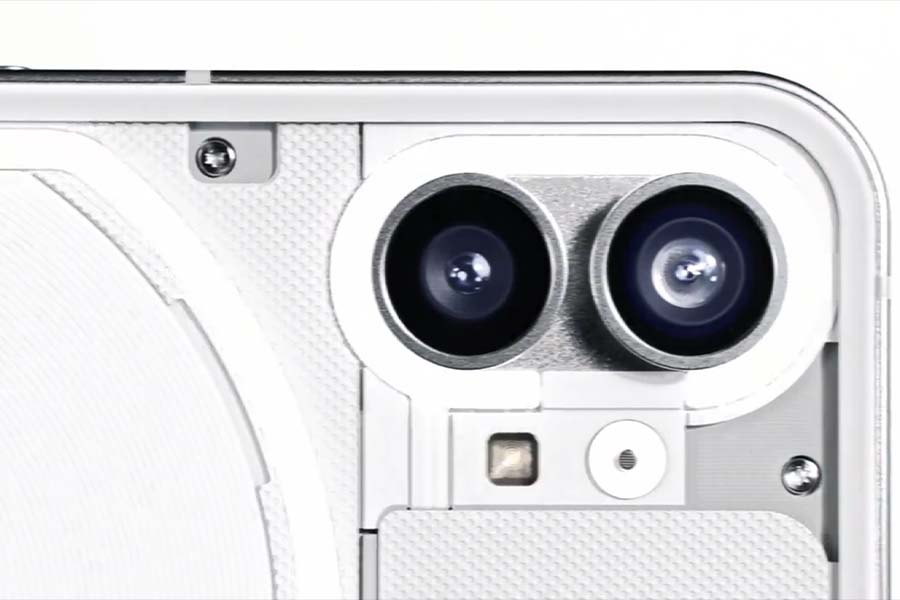 Moving on, Nothing is trying to keep things simple when it comes to cameras, which is why it isn’t just going after the numbers. The phone (1) features dual rear cameras headlined by a 50MP 1/1.56′′ Sony IMX766 sensor with f/1.88 aperture and support for OIS and EIS dual stabilization.

The secondary sensor is a 50MP Samsung JN1 ultrawide lens with a 114° field of view. The smartphone can shoot 4K videos, and the ultrawide lens can also function as a macro sensor. Over on the front, there is another 16MP Sony IMX471 sensor for selfies. Specs-aside, the company has also shared the camera samples of the phone (1). So let’s have a sneak peek at them.

Over on the front, the phone (1) flaunts a 6.55-inch OLED display with a 120Hz refresh rate and 240Hz touch sampling rate. This is a 10-bit color depth panel, has HDR 10+ certification, and features 1200 nits of peak brightness. 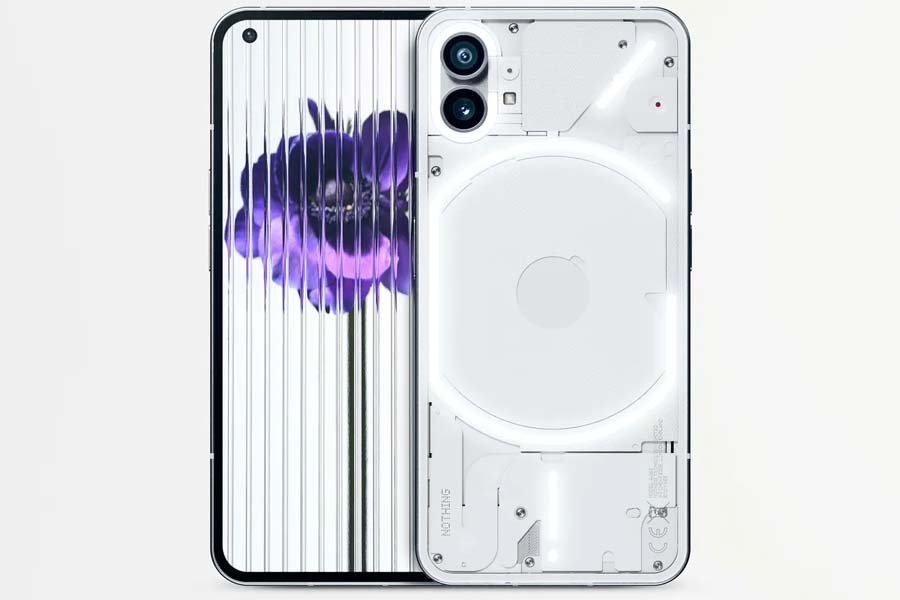 Moreover, the company has used a flexible OLED display to accomplish the symmetrical bezel design in the device. The screen also has an optical fingerprint sensor for security.

When will Nothing phone (1) launch in Nepal?

To no one’s surprise, the phone (1) has made quite a stir in Nepal as well. There is currently no official distributor of Nothing products in Nepal, which is why we aren’t sure when the device will launch in the country.

On the other hand, unauthorized sellers have already started the pre-booking of the device in the marketplace like Hamrobazar. Unsurprisingly, the Nothing phone (1) is rather costly there when you compare it to the price in India or other regions. But looking at the current hype in the market, we do expect that some distributors would bring the Nothing phone (1) to Nepal at a competitive price.

Nothing phone (1) Price in Nepal and Availability