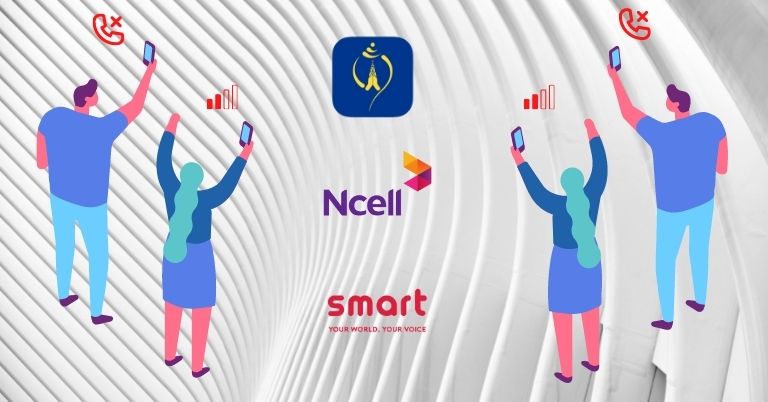 Currently, there are three major cellular network service providers in Nepal: state-owned Nepal Telecom, Ncell, and Smart Telecom. The question about which among the three offers the best service is often asked. However, as made evident by a recent test, neither one of them met the basic requirements of quality and services. Here, we are discussing the results of NTA’s network quality test on Nepal Telecom (NT), Ncell, and Smart Telecom.

The test in question was carried out by Nepal Telecommunication Authority (NTA) in three major cities of the Kathmandu Valley. NTA considered 20 locations inside the capital, 6 in Lalitpur, and 4 in Bhaktapur. In addition, the test took place in and around Ring Road.

For the Key Performance Indicators (KPI) of a network, NTA uses Drive Test. Under this, the testing phone(s) are placed in a vehicle and moved around a certain route. The phones are configured to connect to the most appropriate network (2G/3G/4G) and are used for making voice and data calls of up to 40 seconds.

NTA has three major Key Performance Indicators to determine the quality of the network. For this test, it excluded the ping test and HTTP browsing delay that were part of past tests.

First is the call setup time. It is the time required by the network to initiate a call. According to NTA’s standard, a call setup time needs to be 5 seconds or less. However, none of the three telecom service providers were within the threshold.

Still, Ncell performed comparatively better than NT and Smart, while the latter had the longest call setup duration.

It is the number of successful calls out of a hundred inside the particular network.

Moving on, the drop rate is the number of automatic disconnections per 100 calls. Nepal Telecom, Ncell, and Smart Telecom all had call drop rates below 1%. NTA requires this KPI to be under 2%.

Need for a fourth player

As revealed by the test, Nepali consumers are using services from NT, Ncell, and Smart Telecom that are below the standard set by NTA. What’s worse is that we don’t have many options outside of the major three.

CG has time and again promised to provide reliable and affordable telecom service. Unfortunately, it is yet to receive a unified license from the Government of Nepal.

CG Net has already shown how a single provider can spice up the market if it is determined. And Nepal desperately needs similar magic in the telecom industry.