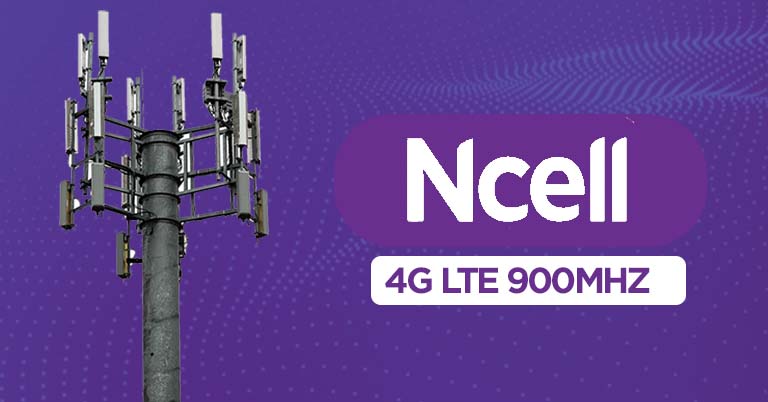 In order to bolster its 4G coverage inside the country, Ncell has started operation on the 900MHz band. Earlier, it had received tech-neutral bands of 900Hz and 2100MHz, which everyone expected to be used for 4G and 3G, respectively. Ncell has now started using the 900MHz for 4G LTE.

According to the reports, Ncell 4G LTE is up and running in select regions. As 900MHz is a low-frequency band, it has better penetration power. Thus, it is suited for cities where there are buildings and similar infrastructures everywhere.

In addition, with all other variables being equal, the lower frequency can cover more distance than higher frequencies. When compared to 1800MHz, 900MHz is known to have 30% to 40% better coverage. As a result, the latter needs fewer base stations than the former to cover the exact same region.

It also has less chance of interfering with higher frequencies of Wi-Fi and Bluetooth devices. On the other hand, the components used for 900MHz are expensive and thus are available mostly in higher-end devices.

Tech Neutrality refers to the freedom given to organizations or individuals to choose the technology most appropriate for their needs. 900MHz is a tech-neutral band, which means Ncell can re-purpose it in the future. As a result, Ncell, which is currently operating 4G LTE on 900MHz, can later use it for 5G too.

As of now, Ncell has used 900MHz for 30% of its coverage site. It is looking to have a nationwide rollout within a year.

It is also preparing to launch VoLTE service at the same frequency. It facilitates clear HD voice calls over the LTE network. The service was recently initiated by Nepal Telecom on its 1800MHz and 800MHz bands.

Once 900MHz has nationwide coverage, Ncell can enable Carrier Aggregation between it and 1800MHz. CA increases the data rate by combining multiple frequencies. Currently, Nepal Telecom is the only operator providing this service in the country.