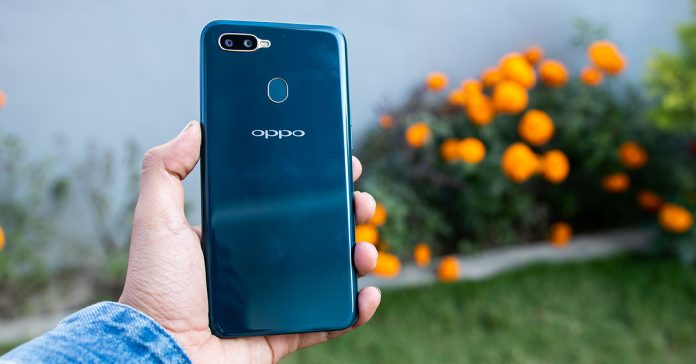 From the makers of the OPPO F9, one of the best mid-range phones, comes the OPPO A7. The Oppo A7 is Oppo’s latest addition to the mid-range section, or is it? With a not so impressive spec-sheet and features, the phone seems to be far away from OPPO’s usual offerings. Recent OPPO phones like the OPPO F9 were a great hit, but with the OPPO A7, it’s kinda difficult to tell.

During my first hands-on with the phone, my initial impressions of it were that of a budget phone. And internationally, it seems like its priced just right, with the 4/64 GB variant priced at $230. But in Nepal, it costs a whopping Rs. 35,790 which converts to around $310. And that is just absurd! And that is just a bad first impression. But let’s see what does this phone have. As for the phone, the phone has a plastic construction, with a glossy finish. The design looks almost like glass at first glance and has the same smooth feeling in your hands. It’s very easy to mistake it for glass but it’s lightweight will give it away. Even though the phone has a considerable thickness, there is no heft to it, which is why, even though it has a premium appearance, it doesn’t feel that way in your hands. So, this phone doesn’t feel very premium.

Personally, I think there’s nothing striking about the phone. The back has a 2.5D curved design, and it is, admittedly, a somewhat different approach for OPPO. The volume rockers are on the left, while the power button resides on the right. It still has a micro USB port, at the end of 2018, which is a disappointment. The fingerprint sensor is positioned nicely beneath the dual camera setup at the rear, and it is easy to reach too. Up front, there is water-drop display with the tiny notch, very similar to the OPPO F9. It is a is a 6.2” IPS LCD panel with an HD+ resolution of 1520 x 720 pixels. Yes, this is only HD+, not the full HD we normally see on a phone at this price bracket. With a 19:9 aspect ratio, the display size is good, but a 271 PPI pixel density is not enough. If you observe closely, you can see some pixelation on the screen. However, color representation, accuracy, and overall display seem good enough. Still, the lack of a Full HD display in a phone of this price category bothers me.

As for the cameras, the rear camera is a dual camera setup which combines a 13 MP primary sensor with f/2.2 aperture and a 2 MP depth sensor. Camera quality is just about average, as it depends heavily on the light. And with a narrow aperture, it is easy to see why. In good lighting condition, the details in the pictures are good enough, but in low light, the images come out grainy and gather a lot of noise. Portrait mode, as usual, is a hit or miss. Some samples, like that of close-up portraits look good and that happens when you have just the right lighting conditions. Edge detection is also good for those conditions. However, for full-body shots, the bokeh effect doesn’t look as good. Edge detection suffers, and the camera cannot recognize differences between the subject and the background very well.

In low light, portrait mode is a straight up miss. The edge detection takes worse hits and suffers and the images gather noise. I would like to blame the small 2 MP depth sensor for that, but the OPPO F9 has the same sized depth sensor and that takes great pictures. So, I don’t know what is with the cameras of the A7. Now, this is not straight up criticism, it’s just that the image quality is not at par with other smartphones of the similar price range. The front camera is a 16 MP shooter with f/2.0 and seems to perform better than the rear camera. The details in selfies are just better than pictures taken with the rear ones. It gathers better light, and image quality comes out good. The software-based portrait also gives a better sense of depth.

There’s the presence of OPPO’s Beauty Mode, which enhances your facial features for beautiful selfies. The AI Face Beauty has a lot to improve while using it on manual mode can give you good results only up to level 2. The rest makes your face appear very cartoonish and weird.

For high-res camera samples of these photos, click here>>

Overall, the cameras are nothing very special, but aggressively average.

In terms of battery, OPPO is always generous. There’s a large 4230 mAh unit packed inside, and that’s not new for Oppo. They’re used to pushing huge batteries on their phones, and with just an HD+ screen, the battery does last a good amount of time. However, there is no any kind of fast charging standard. So, the large battery takes quite a while to charge. It takes over 2 and a half hours for the battery to go from 0 to 100%.

Memory wise, the phone comes in two variants. A 3 GB RAM with 32 GB storage and another one with a 4 GB RAM and 64 GB storage. However, in Nepal, we only have the 4/64 GB variant. There is an option to expand the storage up to 256 GB with a mircoSD card, and you get a dedicated slot.

Battery and Memory wise, the phone tends to be generous and that’s a good thing.

The performance aspect is the one that suffers the most. It is quite ridiculous that for such a price, you only get a Snapdragon 450 chip inside! Yes, a Snapdragon 450! The same processor that you find on the Oppo A3s, which costs almost half of what this costs!

The 4 GB RAM inside tries very hard it seems, but the low-end chipset just doesn’t cut it. And even if there were any excuses for other features of the phone, such a chipset for a phone of this price range is stupid.

The Snapdragon 450 performs just as expected. Multi-tasking is okay up to an extent, but it cannot keep apps open in the background for long. The sluggishness is also noticeable while switching between apps. Initial app loading time is also slow. And if you have multiple tabs open on the web browser, the overall speed of the phone becomes quite slow.

Gaming on this phone is also strictly average. While light games can run pretty well, heavy games like PUBG suffers. You can play PUBG in Balanced graphics and Medium frame rates, but you will face some stutters and navigating is not as smooth. The Game Space feature on this phone, which is somewhat similar to Huawei’s Turbo Boost helps. But it can’t give you the full smooth experience. Asphalt 9 is playable on low settings and even then, it takes a while to load, and there are some minor stutters sometimes.

Software wise, the Colors OS 5.2 on top of Android 8.1 has been updated which is now a bit more user friendly. Overall experience is the same as the ColorsOS seems very heavy. But one thing is that you no longer have to swipe left and cross out notifications to get rid of them, which is a relief. Other than that, there are some bloatware you can’t get rid of, but they are not as many as on some other phones.

Now it might appear as if this review is focusing only on the negative aspects of the phone. But for a phone with similar specs to that of a budget phone that costs close to Rs.36000, this is to be expected. First, a phone with Snapdragon 450 should not cost that much.

Now there is the Samsung Galaxy A6+ with the same chipset, and costs more than this, but that phone has a good design, a Full HD AMOLED display and great cameras to show for it. The OPPO A7, however, cannot be compared to that at all.

There you have it. The Oppo A7! With a large difference in price here, that is Rs.35,790. You get a lot of phones in this price range. There’s also the Huawei Y9 2019 and Xiaomi Mi A2, both of which cost less than this. And we cannot forget the Pocophone F1!

So, with all that competition out there, this phone simply appears to be a waste of money. If the price had been somewhere along the lines of less than 25000, maybe this review would have turned out differently. But it’s not, so for now, I’d like to advise you to let this phone go.