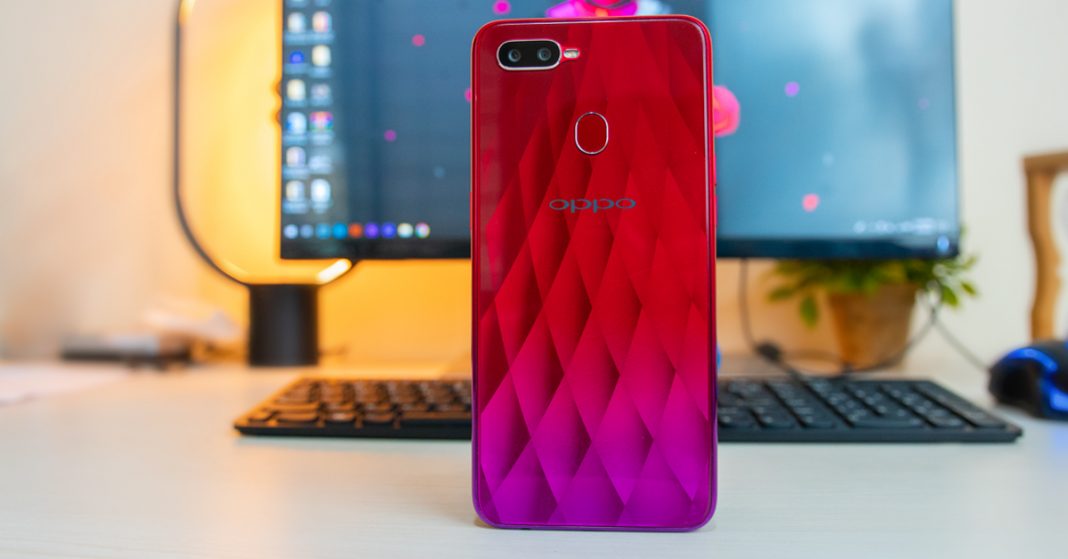 The competition among mid-range smartphones is intriguing. These phones are trying their best to come add something new. Some bring out 4 cameras while others give us an in-display fingerprint scanner. And some give us top-notch specs in a small price tag. And there still seems to be a lot to see. These smartphones companies are battling it out, but as long as we, consumers get new and interesting stuff, it’s quite alright. We have the OPPO F9 in for review. This phone features something called a water- drop display. Does the OPPO F9 surpass its competition? Let’s find out in this review!

The F9 is quite an appealing device. The design is such that it gives off a shiny appearance of a glass body. At first glance, you might not even notice its plastic construction, but you will certainly feel the difference in your hands. The Huawei Nova 3i (Read review) takes the lead when it comes to premium feel, but I like what OPPO has done with the gradient back color and the diamond patterns. If only this was a glass body, I wouldn’t have wished for any improvement on the design front. I have the red version which is named ‘Sunrise Red’ by OPPO, but if you are not a fan of this color, there are other options available too. As for aesthetics, the power button is placed at the right with the volume rockers as well as the SIM/memory card slot just above it. The button placement is quite convenient and though the device is large, it’s very comfortable to reach all of them. Similarly, at the bottom, there’s a single speaker grill with the Micro USB port beside it, a noise cancellation mic and not to miss, the headphone jack. The back houses nothing but the dual cameras, an LED flash, a fingerprint sensor, which is easily reachable, and the OPPO branding just below the sensor. 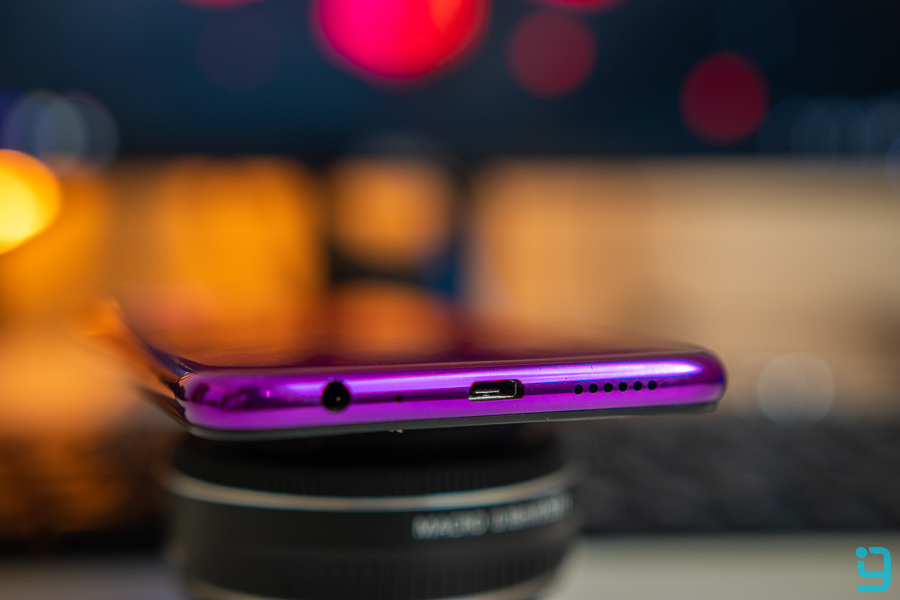 The OPPO F9 feels very light on hands and is also very comfortable to hold. While the Nova 3i felt slippery, this one gives you quite a grip. But since the device is huge, one-handed use is a struggle, especially for someone with small hands like me. 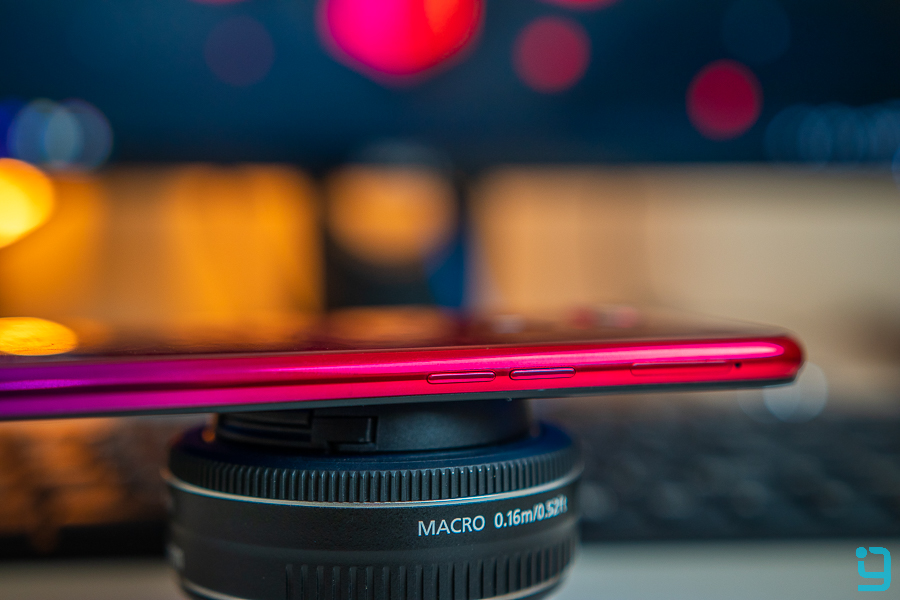 A water drop display. Sounds fancy? Well, actually, it’s called so, because the tiny notch on top looks like a drop of water. And it is the smallest notch we’ve seen since the Essential phone. The small notch houses nothing but the selfie camera and very cleverly hides the speaker grills right above it. Well, there is no fancy Dual cameras on this one, but again, the question is, do you really need one? Moving on, the device has a 6.3 inch IPS LCD FHD+ display panel. And as I already said in my hands-on review, it’s quite vibrant, has nice colors, and good viewing angles which pretty much accounts for a good display experience overall. The sunlight legibility is also excellent as the display is very bright. Also, While watching videos or playing games, the small notch is less obstructive and same is the case with Instagram stories. The F9 gives you a 19.5:9 aspect ratio with very thin bezels. So, viewing content on this one has been a pleasing experience. Another welcoming trait of this device is it’s one of the very first to feature Gorilla Glass 6, which in my opinion, is very ambitious for a mid-range device.

OPPO claims itself as the ‘Selfie Expert and Leader’, which is why we have to do a thorough camera test. The selfie camera definitely impresses you. It’s a 25 MP shooter with f/2.0 aperture. The selfies are bright, vibrant and pack in a good amount of colors. 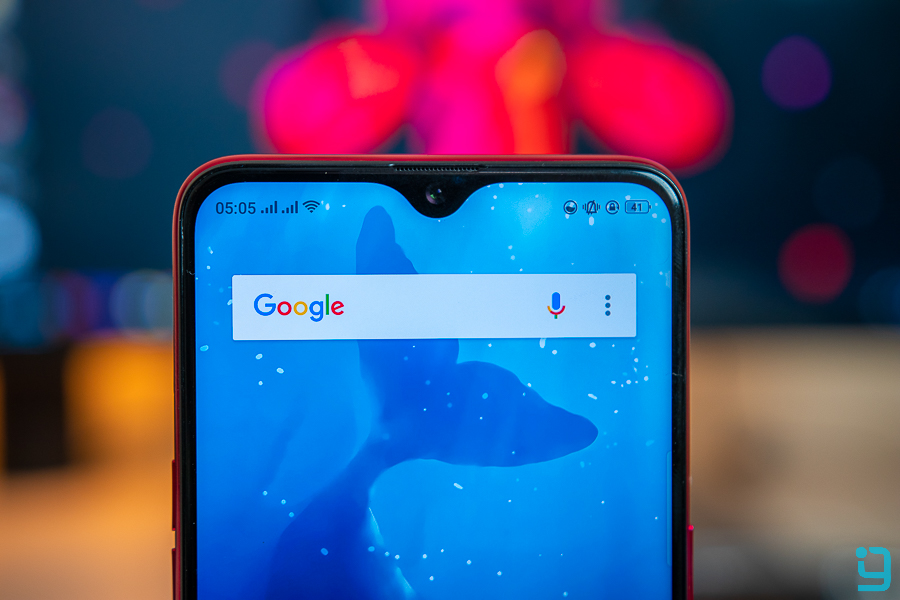 You have a lot of effects for selfies too, like, Selfie Portrait effect, which is purely software. The result is however of average quality with slightly inaccurate depth sensing.
Having said that, I liked the HDR feature which makes the pictures look good in bright environments too. There’s also a super Vivid mode which helps make the pictures more colorful, but sometimes, makes photos look a little too over-saturated.

There is a beauty mode which functions okay in the first levels, but after that, you start looking like a doll.

Night selfies are surprisingly well if there is enough light, but as the surroundings get darker, you will notice grains and loss in detail. The AR stickers are there too, like its predecessor OPPO F7. But this time there are a lot more choices among stickers and they are quite fun to use. I compared the selfies of the F9 with that of the Nova 3i and found the F9’s selfies to be better in aspects like color and vibrancy. But details are slightly better preserved on the Nova 3i. However, pictures on the 3i look a bit pale when put side by side with OPPO F9. Overall, I must say that I quite like the selfie experience on this device.

Moving on to the rear cameras, there is a 16 MP primary sensor and a 2 MP depth sensor on the dual camera setup. Apart from the pictures having slightly inaccurate color reproduction, other aspects seem covered quite well by OPPO. The pictures appear to be full of life. Details are well preserved too.

OPPO F9 Back Camera Samples
1 of 8

However, in the portrait images, you cannot turn off beautification which sets me off a bit. You do have various lighting options for portrait, which sounds fancy but are not very impressive. Most of the times, portrait images loose details and the edge detection is not very proper either.

The camera does identify various objects, which, again is a form of AI that almost all the smartphones seem to have these days. Upon recognizing the objects and scenery, a small icon appears on the top-right corner, indicating that the AI has successfully identified the object. It will, then, tweak some settings thereafter, adjusting the colors and so. It is not very accurate though.

Like with the front camera, there’s a Super Vivid mode on the back that acts to add saturation to pictures, but I liked the normal images better. The HDR feature does work but I didn’t find a lot of difference with the HDR on. Similarly, like the Vivo V11 Pro, there is Google Lens built in the cameras which is an added feature. Likewise, night time shots are okay at best.

Like the Nova 3i, there is a Pro mode, which is here called the ‘expert mode’. This gives you options to change things like ISO levels, White Balance, etc. Talking about other features, the output from the Slow- Mo feature is just average and results in loss of quality.
Also, you don’t have a 4K recording feature and videos can be recorded either in 1080p or 720p only at 30fps and there isn’t any kind of stabilization in them as well which is, very disappointing to say the least.

All in all, the pictures from the F9 are pretty good but there’s a lot of room for improvement, especially in the portrait department and video recording.

To check out all the images in high resolution, click here

Moving on to the performance, the Helio P60 chipset underneath, impressed us in the OPPO F7 (Read review) and the same has been used in the F9 as well. So, the performance is about the same. I did not experience any stutters while navigating, multitasking or gameplay for that matter. But, what I did, is compared the gameplay between the Huawei Nova 3i and OPPO F9 and found the F9 to have a slight edge over its rival. Regular performance between these devices is more or less similar.

However, the storage department is where the Nova 3i beats the F9 as you get 4+64 GB version here and the 3i offers you 4+128 GB version for a lesser price tag. Sure, you can expand the memory using the dedicated micro SD card slot too.

Adding on to the performance side, there is something in-built called the “Game Space” feature, which comes in handy while gaming. With this feature, you can choose to play games without any disturbances from calls and notifications. OPPO also claims that it boosts the gaming performance, but, I didn’t feel anything of that sort. 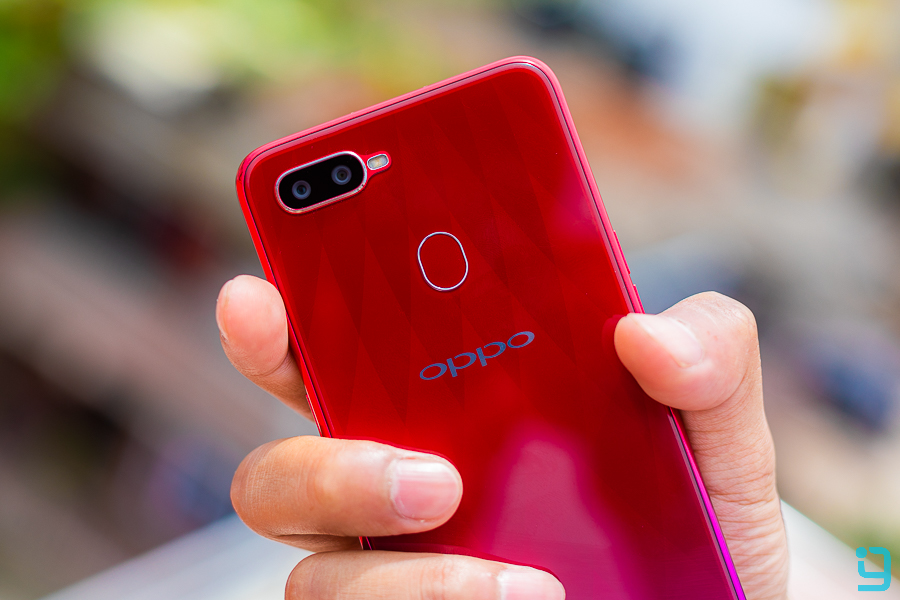 It’s fair to say that OPPO phones always have good and fast facial recognition, but, since there is no IR sensor, it’s not as reliable. But you can always rely on the Fingerprint sensor which is also one of the fastest and it’s really nice to see that it’s in a comfortable position.

The single speaker at the bottom is decent with fewer distortions, but, at loud volumes, you can feel the distortions. The audio from the 3.5mm headphone jack has an average dynamic range and response. As for call quality, I used the NTC and Ncell SIM during my review period and had no problems. Similarly, Wi-Fi connectivity is not an issue in this device and it supports 5 GHz network too.

Software-wise, you get the Android Oreo 8.1 topped with heavily customized ColorOS 5.2. I have said it already and will say it again, I am not a fan of the UI in OPPO phones or even Vivo phones for that matter. The most annoying is having to slide and delete the notifications. I mean, you either have to erase them all at once, or go one by one sliding and deleting. But unlike Vivo phones, at least, you have the search option in the settings menu. Also, there is no app drawer and you have all your apps lying on the home screen. As for the large icons, you have different themes that you can set for your preference.
Similarly, you have an option to enable or disable navigation keys. I like it when companies provide options and let us be in control. But, the absence of LED notification lights is disappointing. It is something that I need and sadly, the F9 doesn’t have it. I guess the water drop display has its own shortcomings. There are also gesture features like many phones have, so nothing new in that department.

The OPPO F9 has a 3500 mAh battery paired with its own custom VOOC charging support. You get a 5V 4A charger that helps you gain a charge of 55% in around 30 minutes. The battery endures pretty well. There are various power saving modes that help you make your battery life better but I haven’t had the necessity to use one as the battery is very enduring in itself. During my normal usage, which includes social media and gameplay along with work stuff and a lot of making calls, the battery gave me a full day’s support with some charge left even after. So, for normal use, the battery lasts for a little more than a day. The presence of a Micro USB is definitely a bummer here, but I think fast charging support covers for it anyway. Although a USB-C would have felt nicer.

The OPPO F9 is definitely a good value for money, at least for Nepal. In India and other parts of the world, you should, however, get the Poco F1 or the Honor Play for less price. But since none of these devices are available in Nepal, the Oppo F9 is a nice package overall with good performance, excellent battery life, a decent set of cameras, good enough design and trendy notch display. Yes, the UI is something I didn’t like but I think it’s a small sacrifice you have to make.

If you are looking for a better design option, or maybe one with a more storage capacity, you may also consider the Nova 3i. Otherwise, what you get more in the F9 is faster charging, Gorilla Glass 6 protection and 5GHz Wi-Fi connectivity. Other aspects are more or less the same.