Home Reviews Samsung Galaxy A6+ Review: All about the camera 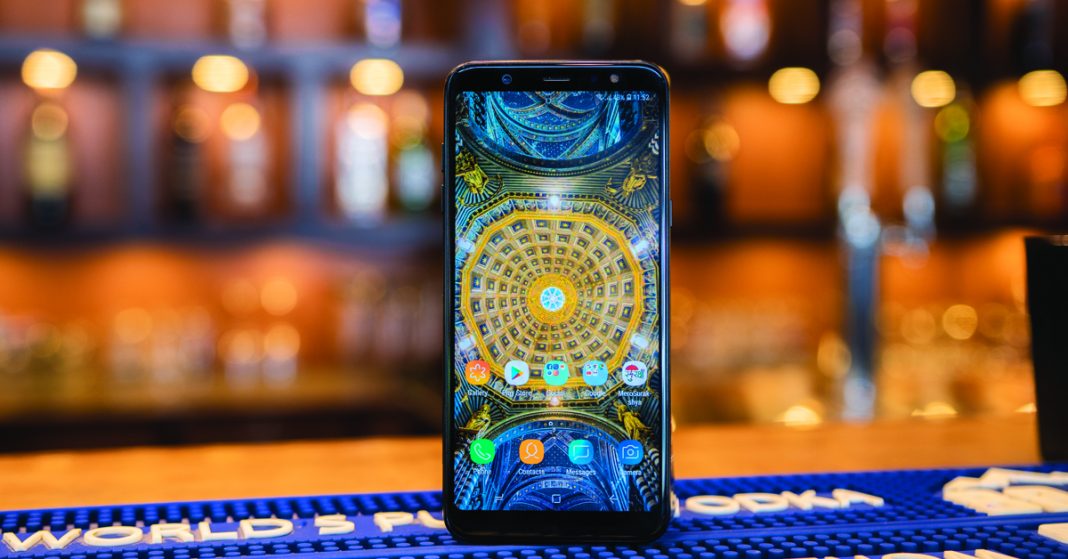 The recently launched Samsung Galaxy A6+ (Rs. 45,000) is neither a typical midrange smartphone nor it’s a high-end flagship. So, who is this smartphone for? With so many options available around 30,000 price bracket, is it worth cashing in extra for the A6+? Let’s find out in the Galaxy A6+ review here.

The Samsung Galaxy A6+ is equipped with the Dual rear cameras — 16MP  sensor with f/1.7 aperture and a 5MP with f/1.9 aperture.

The camera is excellent and captures still photos with great details and sharpness. They are also well-saturated, have quite a bit of dynamic range and the colors are natural as well. The low light photos also turn out to be decent with good saturation.

Samsung Galaxy A6 Plus | Back Camera Samples
1 of 6

The same goes for the portrait pictures as the secondary depth-sensing 5MP camera reads the subjects well to blur out the borders effectively. Also, just like in every other Samsung smartphone with dual cameras, it too has the adjustable blur feature, before and after taking pictures.

Samsung Galaxy A6+ | Portrait Samples
1 of 2

When Samsung had launched the Galaxy S9 (Read review), I was disappointed with Samsung’s decision to not focus heavily on the selfie camera. However, Samsung has seemed to listen to everyone’s comments as the Galaxy A6+ comes with a top quality 24-megapixel front facing camera that shoots photos that have a lot of sharpness and details embedded in.

Another thing I liked about the A6+ is the premium design. This device is made of high-quality aluminum unibody and boy it feels good on hands. It has a right heft to it while holding it and the seamless back is an eye candy. I am also happy to see Samsung include all the three slots instead of choosing the hybrid option. As expected, the call quality on the 4G network on both NTC and Ncell is top notch. There is a speaker right above the power button which is very loud and clear. The audio quality from the 3.5mm headphone jack also has respectable performance. 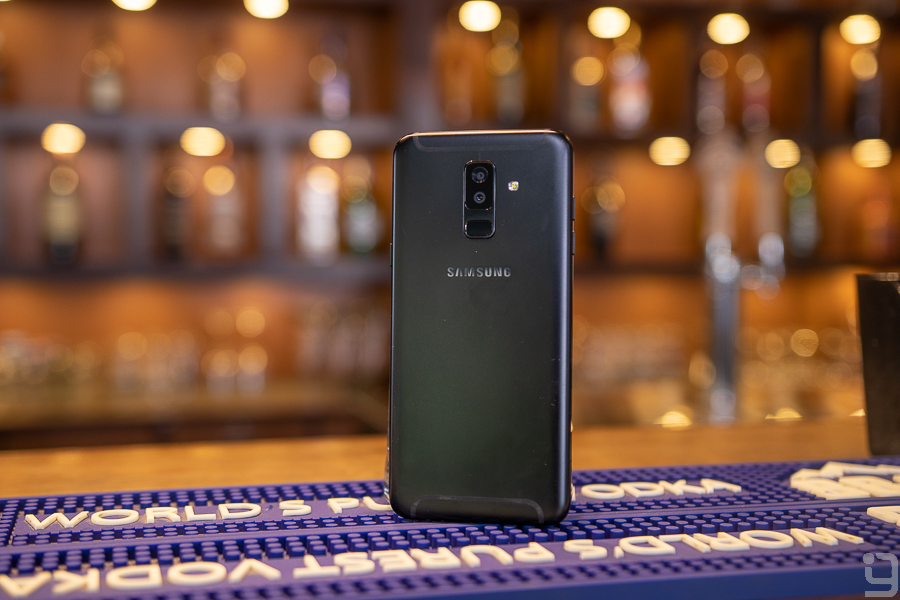 On the front, the Galaxy A6+ features a tall 6-inch Full-HD+ display. Now, Samsung has mentioned the term ‘Infinity’ on the box of the Galaxy A6+, but without the presence of a curved display or very minimal bezels, and if you think it’s going to be similar to the S9 Plus, you might be disappointed by the term “Infinity”. Quality wise, Super AMOLED panel on the device is vivid with deep blacks. It is also super bright and easily usable on a bright sunny day. The touch is very responsive and kudos to Samsung in using a quality display here.

In the software department, the Experience is typical of what you would expect from Samsung phones. Obviously, it’s not stock, so you do get a fair share of bloatware. 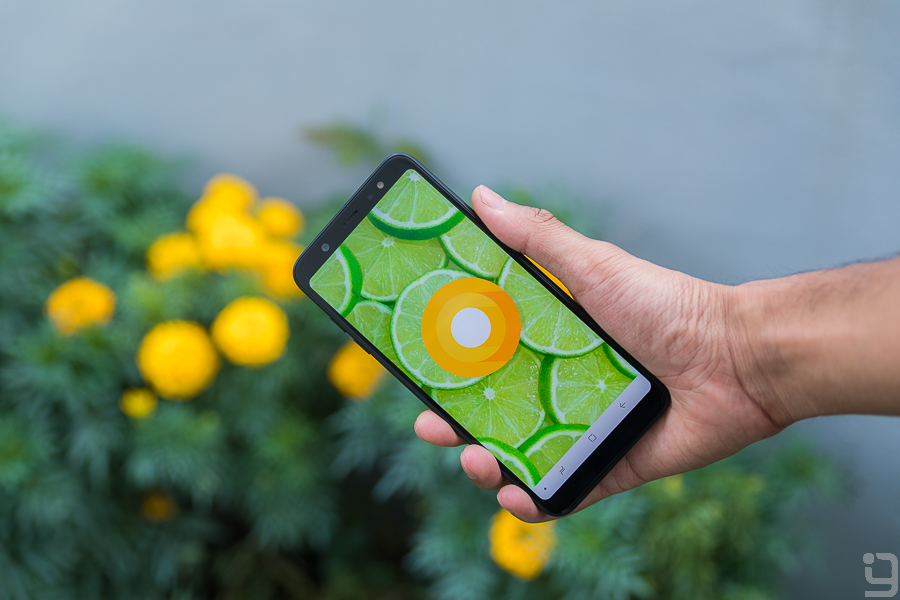 However, I liked the inclusion of S-health and the Samsung Themes. Samsung has also included Always on Display which is a welcome addition considering you don’t get a notification LED.

The area where A6+ has failed to live up to the price is on the performance front. The “mediocre” at best Snapdragon 450 processor is usually seen on devices that sell for a relatively low price. If you compare it with Oppo F7 (Read review) or the Xiaomi Redmi Note 5 AI (Read review), the A6+ falls short by a good margin.

On to the real-time performance, using light apps like Facebook, WhatsApp, Instagram is smooth and you won’t feel the lag. But, it’s not blazingly fast, and apps opening takes a little bit of time. The good thing is there was no major throttling going on and you won’t experience heating after long chatting session.

As for gaming, low-end to mid-tier games are playable at respectable frame rates, but you will notice occasional frame drops while playing high-end games and you will get better gaming phones with better frame rates below this price tag. So, if you are into performance and gaming, you should be looking somewhere else.

Well, talking about the sensor, you do get a snappy fingerprint sensor along with the face unlock which also gets the job done. There’s also a gyro sensor for those interested in Virtual Reality.

What has impressed me is the 3,500 mAh battery which easily lasts for a day and a half under heavy usage. The drawback, however, is that it takes a while to juice up. With no fast charging, the stock charger takes around 3 hours to charge. 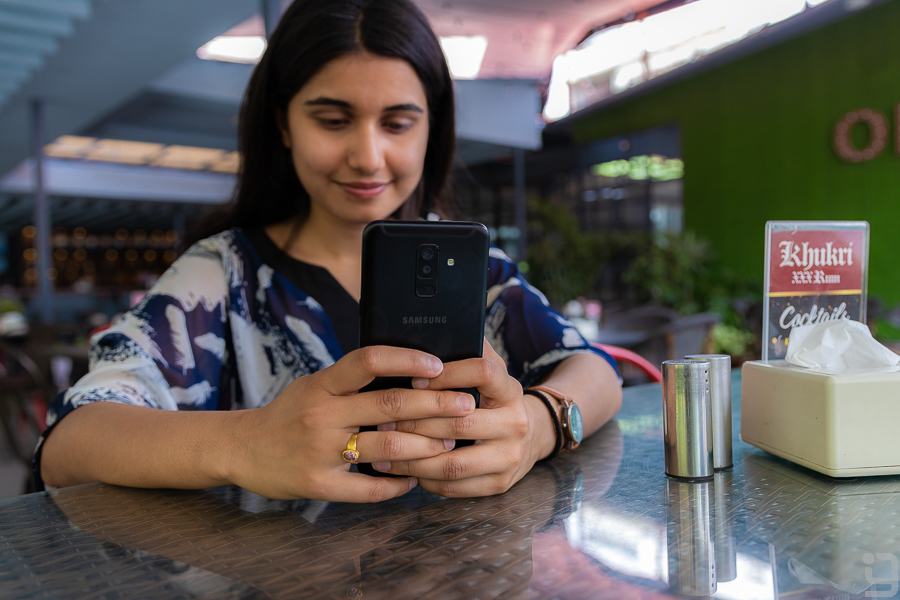 The Galaxy A6+ is Samsung’s answer to the growing number of Chinese smartphones that have started dominating the mid-range market. With this device, Samsung has fallen short on the performance front, as it underperforms for what it is worth. But it does make up for it with superb cameras – both front and back, outstanding battery life, stunning design, and top-quality display. So, if you are not much of a performance geek, you should definitely give the Galaxy A6+ a look.