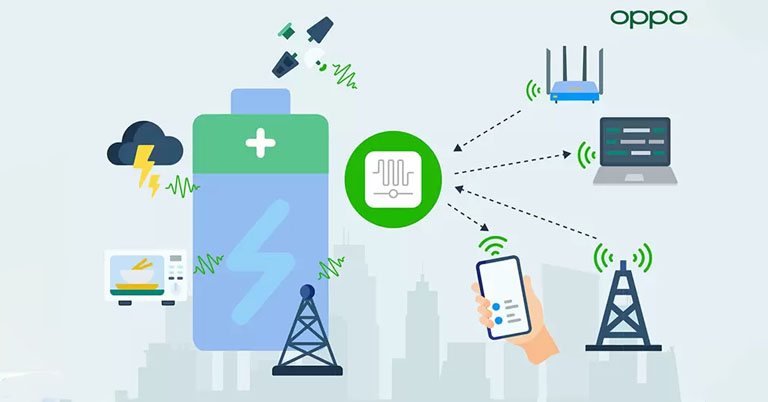 Oppo is a brand that invests heavily in research and development. The company recently released a whitepaper envisioning communication devices without batteries, which it calls Zero-Power Communication. In this article, we will be diving deeper into Oppo’s battery-less tech.

Zero-Power Communication: Everything you need to know

Before we start — What exactly is Zero-Power communication? Well, it’s a concept that future IoT devices will operate without a battery. These devices will generate power in real-time from nearby radiations such as Bluetooth, Wi-Fi, and even smartphone signals. As per Oppo, Zero-Power Communication will not only address the current power need but will also create a roadmap for IoT devices to co-exist in the future.

How does Zero-Power Communication Work?

Zero-Power Communication devices won’t have built-in batteries to power them. They will instead get their power off the radiation around them. Think of it as an evolution of low-power devices. Instead of packaging devices with a chemical battery, we are giving them the ability to create their energy from the radiation.

Here, Zero Power IoT devices will harvest the data/ signals coming towards them and use it to distribute their own data. It could give things like tracking devices like Apple’s AirTag their own endless supply of energy. There is also a scientific term for this — RF Harvesting. It involves the conversion of ambient frequencies into usable DC voltage. Earlier this year, Samsung launched the Eco Remote 2022 based on this same technology.

However, in its current state, RF harvesting has restrictions related to coverage, which Oppo has claimed to address via its Zero-Power Communication. As they won’t have any battery in them, Zero Power Communication devices will be extremely efficient. Likewise, they will be highly compact with low manufacturing costs.