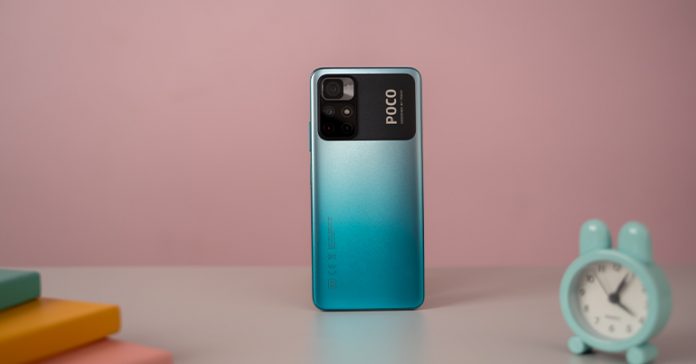 It’s only been 4 months since the launch of the POCO M3 Pro and we already have its successor! Here with me is the new POCO M4 Pro 5G which is basically a re-branded Redmi Note 11 that launched in China a few weeks ago. And as the rumors suggest, it might arrive as Redmi Note 11T in India. Having used the POCO M4 Pro 5G for about a day, this is my early impressions of the phone.

In terms of pricing, the phone’s base 4/64GB variant costs EUR 229 while its 6/128GB version retails at EUR 249. So yeah, like any other 5G midrange phone, this one’s priced a bit on a higher-end as well.

As you might already know, the POCO M3 Pro that launched a while back was not very well received. It was mostly criticized for compromising a lot of features to accommodate 5G. But this time, the company has made sure to bring a few notable upgrades by providing a more powerful processor, dual speaker setup, and a faster charging protocol.

Even design-wise, the M4 Pro feels slightly better with this matte sandstone finish—as opposed to the cheap-feeling shiny plastic back of the M3 Pro. This is still a plastic body though, as expected from a budget smartphone, but it’s sturdy enough and has a definite heft to it.

An eyesore of a camera layout

Having said that, I cannot not address this huge camera layout that covers almost 30% of the phone’s back. For me, it’s definitely an over-the-top design choice and I believe it would have looked much better without the back bar encasing the camera module. 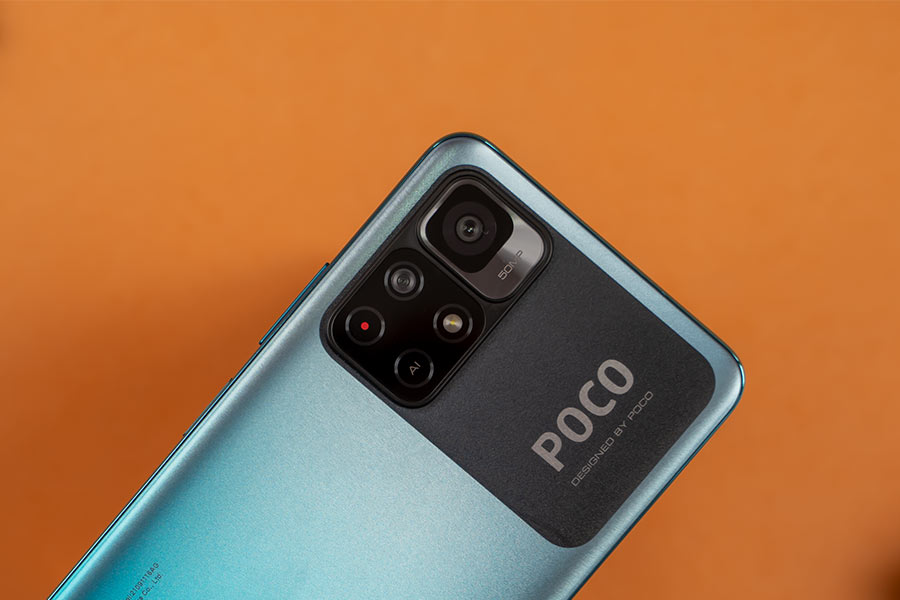 More about this camera layout, at a glance, it certainly looks like the M4 Pro has at least 4 cameras. But don’t be fooled—the two of them are just random circles that mimic a camera lens and there’s nothing to it really. The phone actually features a dual-camera setup consisting of a 50MP primary and an 8MP ultra-wide lens at the back alongside a 16MP camera on the front for selfies.

And at a time when most smartphone manufacturers have been adding useless 2MP macro and depth cameras just for the sake of it, I think this is a very brave move from POCO to decide not to be a part of that marketing gimmick!

Regardless, I’ve only had a day with this phone so I wasn’t able to take a lot of pictures. I did take a few and here are the samples. The images retain an acceptable amount of details but the colors look a bit dull.

Even the portraits and selfies don’t have pleasing fuller colors to them. So, I am not expecting a lot from this camera setup.

The display side of things pretty much remains the same as the POCO M3 Pro though. You’re getting a Full HD LCD screen with a 90Hz refresh rate. However, one thing I’ve noticed is that the touch response has improved by quite a bit here.

It’s 240Hz instead of the standard 180Hz, so the touch response when playing fast-paced games or scrolling is good here. Then again, in terms of the core quality, you cannot expect the same vibrancy and contrast-rich color reproduction as an AMOLED screen from this IPS panel—although this one is good enough for casual usage or watching videos.

And because it does not have an AMOLED display, POCO has opted for a side-mounted fingerprint sensor, which works really well.

By the way, the phone is Widevine L1 certified, so you can watch videos on different streaming services in Full HD resolution. There are no any HDR capabilities in this display though! As I mentioned earlier, POCO has included a dual speaker setup here with the earpiece acting as the secondary speaker. It is definitely better than the mono speaker on the M3 Pro, but don’t get your hopes too high. The quality of these speakers is just average!

Moving on to the performance, the M4 Pro brings an upgraded Dimensity 810 5G chipset compared to the Dimensity 700 on its predecessor. This chipset is basically the Helio G96 with slightly boosted clock speeds. But because it is based on a 6nm process, it’s certainly superior in terms of performance and battery efficiency.

For the most part, the 810 seems to handle the resource-heavy MIUI 12.5 here pretty well. And with the spacious 6GB RAM onboard, I’ve had no issues with multitasking between 6-7 apps either. I also managed to play a few sessions of PUBG and the phone could handle the game smoothly with graphics set to Smooth and frame rates to Ultra.

Yet, I do have to mention that the bloatware situation on the M4 Pro is a little too much. It comes with a lot of crappy games and useless apps pre-installed which take up a lot of space. Likewise, I have the global unit of this phone and it supports 12 5G bands in total. Finally, the POCO M4 Pro 5G gets its juice from a 5000mAh battery which should be able to provide a good endurance since I’m yet to drain its battery to 0% after testing it for 7-8 hours.

So, that was all for my quick impressions of the new POCO M4 Pro 5G. It definitely is a decent upgrade over its predecessor with a more capable chipset, dual speakers, faster charging, and a more versatile camera setup.

As a result, it does look like a solid budget 5G phone for the European market. But, the competition here in the South Asian region in that midrange segment is quite crazy. And POCO must price it more competitively to make it a viable product.