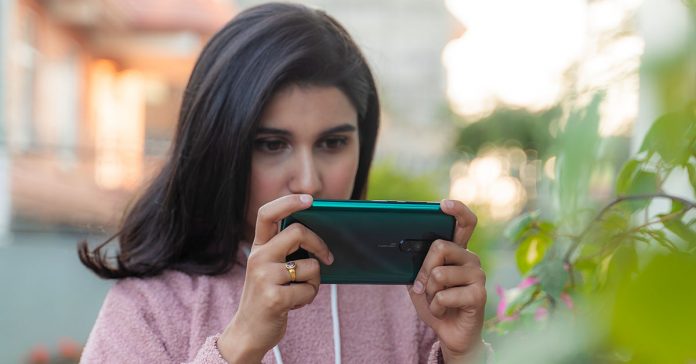 The Redmi Note 7 Pro was an excellent mid-range device and now, Xiaomi has recently launched the much-anticipated successor, the Redmi Note 8 Pro in the Nepali market. The Note 8 Pro offers a newer design, a much powerful chipset, and a 64MP quad-camera setup at the back. The base 6+64GB variant price starts at Rs. 27,000 in Nepal, which is very close to the Indian pricing. So, is the Redmi Note 8 Pro value champion like its predecessor? Find out in our Redmi Note 8 Pro review.

The Note 8 Pro is the best design Xiaomi has ever made in its Redmi Note series. This is truly a break from Xiaomi’s boxy designs on smartphones and its utterly gorgeous. You get curvier back this time and it feels comfortable on the hands too. It is a big phone though and it’s thicker than the Note 7 pro as well. It’s a glass design with the frames made out of metal. The back and front are both protected by Gorilla Glass 5. Although I admit that it’s slippery, I used it with the clear case on which helps a lot. All the buttons are on the right with the SIM tray on the left and below a type C port, a headphone jack and the speakers. The SIM tray has been sealed with rubber stuff that may protect against some accidental spills. That is a good feature to have and something, I think all phones should implement.

As much as I love the design, I would point out that the fingerprint sensor is in a very awkward position. But, with time, you get used to, at least I did.

The Redmi Note 8 Pro features a 6.53-inch FullHD+ IPS LCD display with a 19.5:9 aspect ratio.  The display is one of the best looking IPS displays, it’s lively, it’s colorful and fairly bright. So, I have to say that this one definitely has a better display than the Note 7 pro. The bezels are pretty minimal and you get a U-shaped notch up top, which I don’t mind at all.  Additionally, you get a gesture feature in case you want a full-screen experience. I like to go traditional with the buttons, but that’s totally your choice. The display is bright even outdoors, so you are not going to face any problem on that part. However, we hope Xiaomi uses AMOLED panels in their future iterations as AMOLED display has a better contrast ratio and punchier colors than the IPS ones. The Xiaomi Redmi Note 8 Pro sports the latest MediaTek Helio G90T chipset. It’s a gaming-centric midtier chipset and a big upgrade from the Snapdragon 675 found in the Note 7 Pro. I have been playing demanding games like PuBG, Fortnight, and Asphalt.  All of these games run smoothly in the highest settings without any lags and stutters.

I did a heating test of the phone and played games for around two hours and continuously measured the temperature while doing so. And I had expected the phone to heat to alarming levels, but it did not. Actually the temperature did not go beyond 40 degrees even after 5 sessions of PUBG back to back followed by 3 sessions of Asphalt 9. Needless to say, the Redmi Note 8 Pro is, as of now, the best gaming performer at this price.

Also, the day to day usage has been great. I never felt any stuttering while doing my daily activities. It feels smooth as I expected it to be. Whether it be heavy multitasking or opening big apps, the phone handles it all nicely.

For the software experience, it’s currently running on the MIUI 10 (in the unit we have). However, Xiaomi should roll out the MIUI 11 update before the end of 2019. From transitions to app loading, everything is fast and buttery. And although MIUI is repetitively heavy as compared to others, you won’t feel any sluggishness when navigating through it, all thanks to 6GB RAM and Helio G90T chipset. And we haven’t had the problems of advertisement flowing through certain parts of the UI too, so it seems like Xiaomi has taken care of it.

The Redmi Note 8 Pro has a quad-camera setup at the back. There’s a primary 64MP f/1.8 Samsung GW1 lens, an 8MP Ultra-wide angle lens, a 2MP depth sensor, and a 2MP macro lens. And first of all, what I did was checked what are the improvements on the Note 8 pro’s cameras compared to the Note 7 pro. And to my surprise, I got most of the images to be better on the Note 7 pro. Note 7 Pro has a better dynamic range and balance of exposure and sometimes even better colors.

Then I moved on to 64 MP images. At first, I thought there was going to be a huge notable difference between normal and 64 MP images, but well, the 64 MP images are a little bit, just a little bit sharper than the 16 MP ones when zoomed in, but other than that, nothing.

The normal 16MP images from the Note 8 pro look good. Although they struggle in terms of dynamic range in certain scenarios. The colors look good, but flower images tend to lose details. However, human subjects have a good skin tone to them so that’s nice to see. So overall I would categorize the images as not bad to say at the least. You also get 2X digital zoom with this one and the images are okay.

Back Camera Daylight Sample
1 of 6

The 2MP depth sensor does a decent job when it comes to Portraits. They have better edge detection than the Note 7 pro actually. The subject looks good and so does the background. You can even change the blur amount in portraits which is a nice feature to have.

Back Camera Portrait Sample
1 of 3

Wide-angle images have a slight color shift from the normal ones. Normal images come out a little darker than wide-angle ones but the difference is not so overwhelming so it’s fine.

Normal Image Vs Wide-Angle Image
1 of 4

Now macro images from the 2MP sensor are a pure gimmick like what I said with recent Realme devices. It lets you go a little closer to the subject than the normal camera but the quality is just bad. However, they seem a little bit, just a little bit better than what we got on the Realme 5 Pro.

Selfies from the 20MP front camera are great. You will surely get a note of natural skin tone and good details. There is a reddish tint going on in the images which some might not like, but it’s purely a matter of personal choice.

Portrait selfies look good too. You cannot change the blur in portraits like the rear cameras here. But the blur looks good. Since it’s software doing things here there’s very little to complain.

Night time shots, however, are miserable. When put in comparison with the Note 7 Pro, the normal night time images look darker and void of details.

With the Night mode on, things improved a little bit but again, it works better on the Note 7 pro.

Video- wise, it’s the standard you get here. The best stabilization you get in 1080p 30 fps and in 4K, the videos are very shaky. And interestingly, videos can also be recorded via the macro lens which may be good news to some people but the quality is so bad, you would not want to record with it.

Now this time, Xiaomi has upscaled a little bit in the battery department. There is a 4,500mAh on the Redmi Note 8 Pro, which I think makes up for the chipset is a bit less energy efficient (Helio G90T is based on 12nm Vs Snapdragon 675 is based on 11nm). Once fully charged, the battery lasted me for a day on my usage.

The day I gamed a lot, the battery endurance was a little less, I had to put it on charge in the evenings. But that’s only when you game a lot. Otherwise on normal usage, the battery pretty gives you a day. You get the 18-watt fast charger inside the box which takes the juice from 0- 100% in slightly over two hours. There’s an IR blaster as well, so if you happen to lose your TV remote, the Note 8 Pro can serve the purpose for you. And this is something almost all the companies are getting rid of which is kind of sad because it does come in handy.

Xiaomi also did not get rid of the LED notification light. Well, it only glows in one color, like it always has with other Xiaomi phones but just the inclusion makes me happy for some reason.

In terms of call quality and network reception, I have had no issues whatsoever. There’s also 5GHZ WiFi support, an aspect many phones still neglect, so that’s nice.  Moving to the speakers, the single firing bottom speaker is pretty good. It is moderately loud and does not distort in high volumes.

In conclusion, the Redmi Note 8 Pro is a well-balanced midrange phone with excellent performance, great design, and good cameras. It lacks AMOLED display and in-display fingerprint sensor, which phones from VIVO and Samsung is offering at this price point. However, I think they are not an absolute need as its IPS panel and the rear-mounted capacitive fingerprint sensor are good enough.