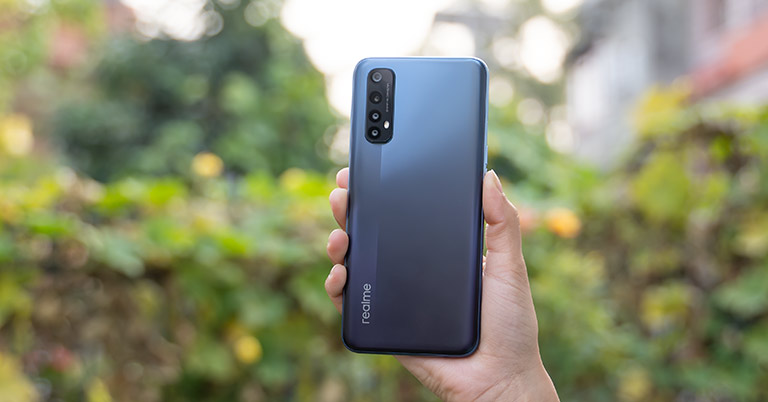 Realme launched the Realme 7 and 7 Pro recently replacing their older 6 series and in this review, I will be talking about the cheaper Realme 7. Since the two series launched only 6 months apart, there does not seem to be that much of an upgrade really. But, is the Realme 7 a good value for the price it’s asking? Allow me to discuss the Realme 7 in this detailed review. If nothing else, the company has definitely improved the design on the Realme 7 compared to its predecessor. I like this new design language and the camera module. Although the back of the phone has a matte finish, it still attracts a lot of smudges so make sure to use the silicone cover that comes inside the box.

Getting to the ergonomics, Realme 7’s plastic build is not heavy and the phone is comfortable to hold as well – so everything is good on that part! On the right side, you get a side-mounted fingerprint sensor that works flawlessly as long as your finger is not wet or greasy. Then again, that’s a problem with every physical sensor, I guess.

But even though the phone looks good and everything, I don’t think that it is particularly well built because there is a little creaking on this side of the design. I don’t know if this is a manufacturing defect on my unit only, but it’s there and it cannot go unnoticed. If I remember correctly, we had the same problem with the Realme 5 series too.

Additionally, what I have noticed is such quality control issues mostly occur with units that we buy from India. So, if you are someone watching from India, be sure to check for these things before you buy this phone or any other Realme phones for that matter.

Anyway, let’s get to the display. And it’s no secret that one of the best things about Realme 7 is most definitely its smooth 90Hz screen. Apart from that, this 6.5-inches IPS LCD FHD+ panel has good colors, sufficient brightness, and good viewing angles. Again, the colors are not as vibrant as AMOLED screens, but this is one good-looking LCD panel.

Other than that, the phone only has Gorilla Glass 3 protecting it, so be sure not to drop it or better yet, use a good screen protector. Also, I am slightly disappointed with the fact that I have faced occasional screen flickering issue on this display. At first, I once again thought that this was specific to my unit only but then I read the community forums to find out that others are facing the same problem. I think this can be fixed with an update so I’m hoping Realme pushes one quite soon. Then again, this has hindered my experience with the device and I thought you guys should know about this!

While the company hadn’t yet pushed an update to the Realme 7 regarding its ghost-touch and screen flickering issue at the time of writing this review, fortunately, the phone received an update regarding the problem on October 7.

Alright, moving to the performance, Realme 7 comes bearing the newest MediaTek’s Helio G95 chipset which is built on a 12nm architecture just like its predecessor, the G90T. In fact, it’s the first phone to feature this gaming-centric silicon. Moreover, the Realme 7 bears a lot of similarities with the Narzo 20 Pro, in terms of the design, perfomance, and more.

Here, both the Helio G90T and G95 are basically the same except for a few improvements on the latter. The G95 has a 5% better GPU performance than that of the G90T. As a result, you will get better AnTuTu scores and other GPU centric benchmarks. In real life usage though, the 5% GPU performance is barely noticeable. But, what I can say is that the phone performs really well.

During the entirety of my time with the phone, I haven’t faced any major problem with how it performed. Multitasking and app opening is considerably fast and normal tasks run like a breeze. So, the performance aspect of the Realme 7 is a thumbs up from me.

When it comes to gaming, you can get a considerably smooth 40-45 fps in PUBGm with settings set to Smooth graphics and ultra frame rates. With balanced frame rates, you would probably want to scale down the graphics to HD for smoother gameplay. Similarly, games like Asphalt 9, Call of Duty, etc. have no problems running smoothly whatsoever.

In terms of thermals, well, with around 5 continuous games of PUBG, the phone reaches around 40 degrees. So, I’d say that the phone definitely heats up a little when pushing it to its edge. On the other hand, light gaming is not going to affect Realme 7’s temperature at all. By the way, the unit I have with me is of the 8GB RAM and 128GB storage variant. You can also go with the 6/64GB option if 64GB storage is fine for you. 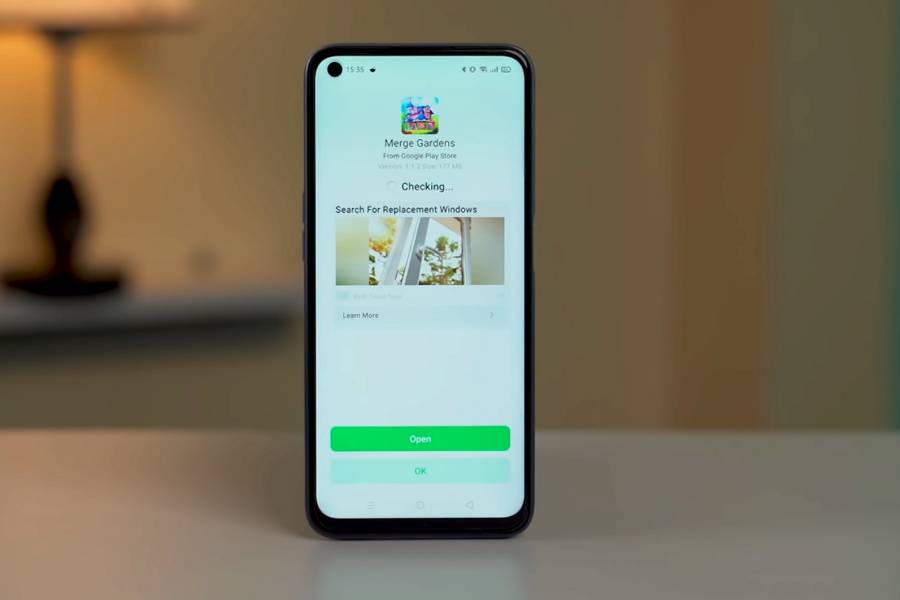 Software-wise, here, you are greeted with Realme UI 1.0 on top of Android 10. And as much as some aspects of the Realme UI look different over Oppo’s ColorOS, you can’t help but notice that it’s just another repackaged version of ColorOS. Talking about the experience, well it’s basically the same as Realme 6. But sadly, Realme has started pushing ads in its UI just like Xiaomi and I have had a couple of instances of ad encounters while downloading apps from the Play Store.

Other than that, I haven’t come across with other ads on the Realme 7, at least for now. So as things stand, the situation is not as bad as some non-flagship Xiaomi phones. Thankfully, if you don’t want to face any ads on your Realme smartphone (as you should), you do have an option to turn it off altogether.

In terms of updates, my unit of Realme 7 has received the August security patch while writing this review and we’re already well into October. So, I just wish these updates could be a little bit faster as a delayed update on such a recent release is quite disappointing.

Now, let’s talk about the cameras! With the Realme 7’s camera setup, what I was eager to check were, number 1, how much of an upgrade is there from the Realme 6 and number 2, how do Realme 7’s cameras fare against the 7 Pro considering they both use the same Sony IMX682 sensor.

And after my time with all three phones, I have accumulated quite the findings. But first of all, let’s check out some images from Realme 7!

As evident from these pictures, the primary 16MP pixel binned images have pleasing colors, good details, and an acceptable dynamic range.

On the other hand, the 8MP ultra-wide images struggle with the dynamic range with average details and look dark overall.

The macro lens, as usual, is of very little use considering its quality.

Getting to the portrait images, they are average, especially, in terms of edge detection and background colors.

Likewise, nighttime images, in instances of very less ambient light, are subpar with grains and muddiness here and there.

The night mode feature rectifies the lack of detail and exposure management by a great bit, but you know the drill – it takes around 5 seconds to process the shot.

Videos on the Realme 7 are good enough for casual recording. Cranking up the resolution to 4k 30 fps, you do get good visuals but the stabilization is a big swing-and-a-miss. The same is the case with 1080p 60 fps videos. As a result, you can get decent stabilization only in 1080p 30 fps videos. So, if you are not using a gimbal, I would suggest you shoot in this resolution for stable footages!

Now, let’s get into how much improvement there is from Realme 6 to Realme 7. After testing these phones extensively, I found very few differences among them, which came as a surprise to me considering the Realme 7 has a much superior camera sensor on paper.

The only difference I found was that Realme 7’s images are a little warmer with slightly better sharpness and that’s about it.

Selfies, including portrait selfies, share the same fate. There is a slightly prominent red tint in the Realme 7 selfies but other aspects look exactly alike.

For the rear portraits, Realme 7 has better subject details as Realme 6 makes the subject smoother. Otherwise, it’s hard to differentiate between the images.

Similarly, nighttime images from the Realme 7 have ever so slightly better detail, but nothing that would make any of them stand out.

Likewise, as I mentioned earlier, I also compared the Realme 7 against the more expensive 7 Pro and found that the latter has a better dynamic range in its images because of which it is able to produce better colors in many instances.

And even while focusing, Realme 7 sometimes struggles to lock focus in small objects while the Realme 7 Pro does it much faster.

Apart from that, selfies of the Realme 7 Pro have better HDR and color reproduction.

even night time images look slightly superior with better colors, but details and everything looks similar.

Overall, I am slightly disappointed with what I’d expected from Realme 7’s cameras because it does not offer a significant improvement over the last-gen Realme 6 – which would mean that the Realme 7 will not be able to compete with the likes of Galaxy M31 as it had better camera performance than the Realme 6.

For the battery, you get a sizable upgrade on the Realme 7 with its 5,000mAh cell as compared to the 4,300 on the Realme 6. And I have to applaud the endurance as well as it took me a full day to drain the battery entirely on normal to medium usage. 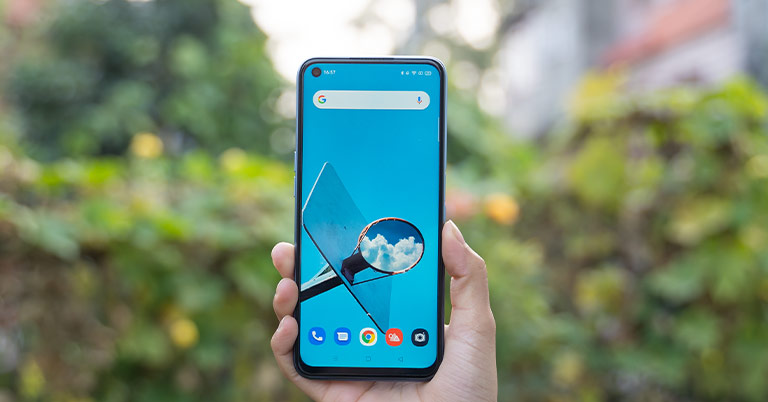 In terms of charging, yes, you don’t get super fast 65-watt support like the Realme 7 Pro, but I think its 30-watt fast charging is sufficiently fast-enough for many. It is capable of taking your phone from 0-100% in about an hour. So, for me, the battery side of things on Realme 7 looks good.

When it comes to speakers, you don’t get a stereo speaker setup on Realme 7 like the Realme 7 Pro. So, its audio quality is just strictly average.

All in all, the Realme 7 is a good device, there’s no doubt about that! But it’s also true that it is just an incremental upgrade over its predecessor. Actually, its cameras could have really been a standout feature especially with the new Sony sensor, but sadly, that’s not the case. Still, it is a pretty good contender for the price it comes for!

Having said that, there are some things I wish Realme definitely improves in the next generation, like the build quality, which was questionable in Realme 5 and now even in Realme 7. Proper quality control would ensure that people don’t suffer from display flickering issues like I have been facing in my unit.