Home Realme Realme C25Y Review: The Bottom Of The Barrel Realme has been on a roll of launching new smartphones. The company recently unveiled the GT Neo 2 in the Realme GT series, as well as new additions to its midrange 8 series. Moreover, for the entry-level market, Realme has launched the C25Y. I’ve been using the phone for a few weeks now and in this review, I will be sharing my experiences on how the Realme C25Y performs in day-to-day life.

Starting off this review with the design, the Realme C25Y sports a textured surface on the back. To be honest, visually, it looks a little off-putting to me. Its textured pattern does feel pleasant in the hand though. I have the Glacier Blue color option, which has a bright blue hue on the bottom that fades into light blue as you move upwards. 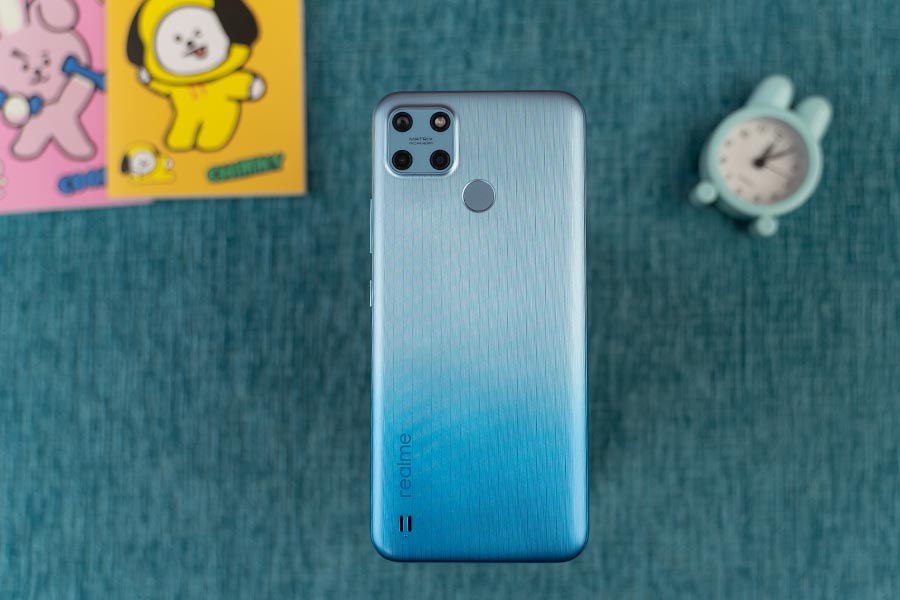 Furthermore, the rear includes a fingerprint scanner and a camera cutout. The fingerprint sensor works correctly, although Realme could have made things better by adding a different texture or a slight groove to it. Most of the time, I couldn’t tell where the sensor is since its texture is so similar to the phone’s frame.

Now, although the back doesn’t attract any fingerprints or smudges, Realme should have provided a case to wrap the phone around. Still and all, at 200 grams, the C25Y will definitely make its presence felt in your pocket.

On to the display, it’s pretty basic stuff here. You get a 6.5-inch IPS LCD panel with HD+ resolution and a water-drop notch for the selfie camera. The “HD” of it is a deal-breaker here as brands have started providing FHD resolution in this price bracket. As a result, when streaming videos over YouTube or Netflix, the subjects look soft with slightly subdued colors. Force-enabling 1080p mode on YouTube doesn’t help much either. However, the screen appears to have a fair degree of clarity—but remember this is strictly limited to typical usages like browsing through the UI and surfing over social media handles.

Furthermore, on top of an HD panel, the Realme C25Y also skips a higher refresh rate. In comparison, the Redmi 10 Prime, which costs just INR 500 more in India, has an FHD display with a 90Hz refresh rate.

That’s not it! The final nail on this hopeless coffin is that the phone doesn’t even support Widevine L1 certification. That means you are capped out at SD videos on Netflix and other OTT platforms. On the other hand, this display can get fairly bright enough indoors, although it does struggle with visibility when you’re outside—even on a fairly cloudy day.

In terms of performance, the C25Y is driven by a Unisoc T610 chipset. But hey, don’t dismiss this “Unisoc” SoC just yet since it’s a rather capable chipset for everyday use. It is fabricated under a 12nm process and features two Cortex-A75 and six Cortex-A55 cores, all clocked at 1.8GHz. 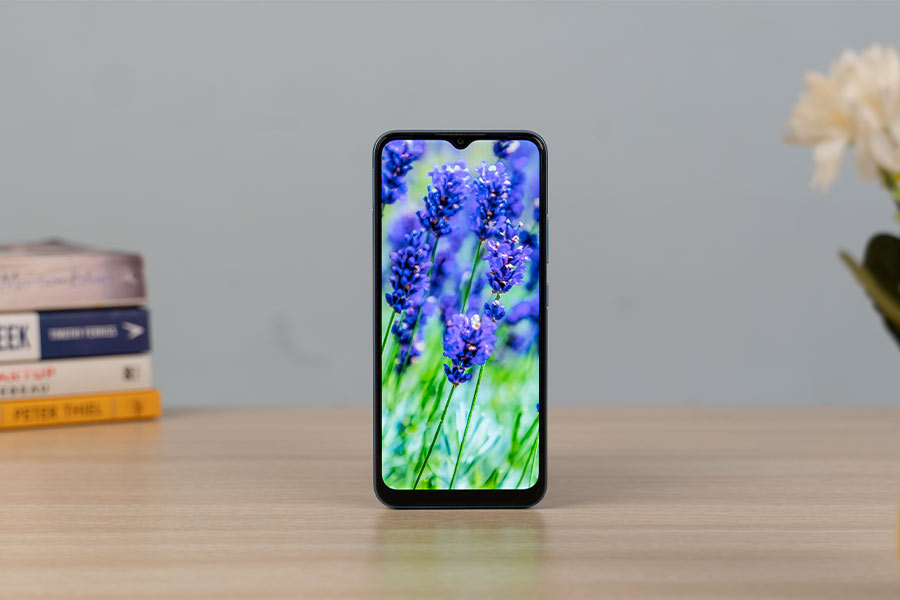 Moreover, it has been paired with 4GB of LPDDR4X RAM and 128GB eMMC 5.1 storage (expandable). So, going over my everyday chores like web-browsing, YouTube streaming, and surfing over Twitter feeds is nothing of a hassle here.

Gaming, on the other hand, is where the phone struggles the most. I played demanding titles like PUBG and Call of Duty Mobile where my experience was nothing to write home about.

So, dialing down to the lowest graphics setting helps for better stability. Also, after 30 minutes of gaming, the phone gets noticeably warm near the camera module.

Leaving those considerations aside, the software is where the Realme C25Y really gets tricky. It runs the new Realme UI R Edition on top of Android 11. This is the first time I’ve been using this UI, and it didn’t appeal to me too much. It forgoes several basic actions, including quick uninstall, sidebar, and split-screen. Furthermore, this Android skin lacks a dedicated game mode, customization levels on dark mode, and worst of all, you can’t even snap a screenshot using 3-finger gestures. These are simple yet highly useful actions I use on Realme devices that boot on standard Realme UI.

Overall, there are a number of compromises Realme has made with its new R Edition skin, and having the fundamental choices missing is a tad frustrating.

Let’s talk about the cameras now. Realme C25Y sports a triple-camera setup at the back. This consists of a 50MP primary, and a couple of 2MP sensors for portrait and macro shots. On the front, there’s an 8MP selfie shooter.

With those specs listed above, you may have figured that it lacks an ultrawide lens. On top of this, the front camera can’t even click portrait shots. Realme, you messed this up!

Under ample lighting, photos from the primary camera turn out to be fairly good. They have a high dynamic range, and the colors are also quite natural. Yet, the pictures appear to be sharpened here.

Moving on, the portraits from the C25Y are often hazy and sharpened. And, as one would expect from a budget phone, the edge detection is poor while the subject has a reddish tint to it as well. Also, you can clearly see how it struggles to maintain exposures and dynamic range.

Close-up shots from the onboard macro camera aren’t that great either. The photos have fairly subdued colors yet have a decent level of detail.

Likewise, the nighttime shots come off grainy and with little detail, while it shoots soft-looking photos sometimes.

However, turning on the night mode helps the matter a little. It sharpens the image and tries to maintain the exposure. The dynamic range is also a bit improved in the night mode.

Now, when it comes to selfies, subjects look extremely over-sharpened, while the backdrop is muted in color. There is also a reddish/pale hue to the face.

In terms of videos, the phone maxes out at 1080p/30fps recording and does not feature any stabilization option either. So, as expected, the footage comes off quite wobbly. Furthermore, videos from the C25Y have a warm tone to them and are over-sharpened.

Aside from the under-par cameras, the Realme C25Y delivers a fairly impressive battery life. It comes with a 5000mAh cell that supports 18W fast charging. Under medium to heavy usage, the phone provides a net 7-8 hours of screen on time. 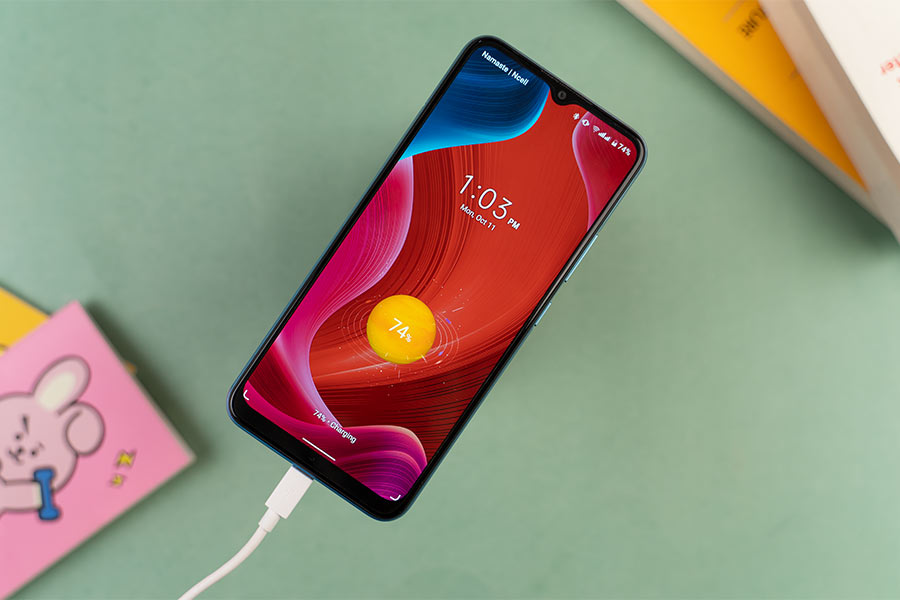 Charging it up, on the other hand, is quite a drag. Using the power adapter provided inside the box, the device juices up from 0 to 100% in around 2 hours 41 minutes. However, what’s yet another letdown here is that it comes with a classic Micro USB port.

Finally, the audio quality from the mono speaker at the back is strictly adequate. The sound output is basic and sufficient for watching videos, but listening to music is a questionable joy. As a result, most of the time, I preferred listening to music over headphones or a portable speaker instead.

To sum up this Realme C25Y review, it’s a rather unimpressive phone. While its appearance and battery life are somewhat appealing, the phone ultimately falls short of the competition in terms of performance, camera, and display. What’s more aggravating is that Realme is even scrimping on its software.

Thus, as I mentioned earlier, spending just INR 500 extra in India would bring you a far superior device in the form of Redmi 10 Prime. So, at this price, the Realme C25Y is a definite no-go.