Hello everyone, hope all of you are doing well. Buying a premium mid-range phone is tough right now since there are so many enticing options available. And here, I am comparing two of the arguably best premium midrange smartphones of 2021, the Samsung Galaxy A72 and the Realme X7 Pro.

While the Galaxy A72 is Samsung’s latest premium midrange phone with some high-end features, the Realme X7 Pro is one of the most underrated phones right now. So, which phone should you pick and more importantly, which one is perfect for you? Let’s find out.

Okay, I will be judging these phones’ design in three aspects basically: the way it looks, how it feels, and other assorted design traits.

In terms of looks, the Galaxy A72 is definitely an eye-candy, especially with the pastel color options it comes in. However, it feels ever-so-slightly boxier. But don’t get me wrong, the phone is not uncomfortable or anything. It’s just that the A72 has a bigger form factor. 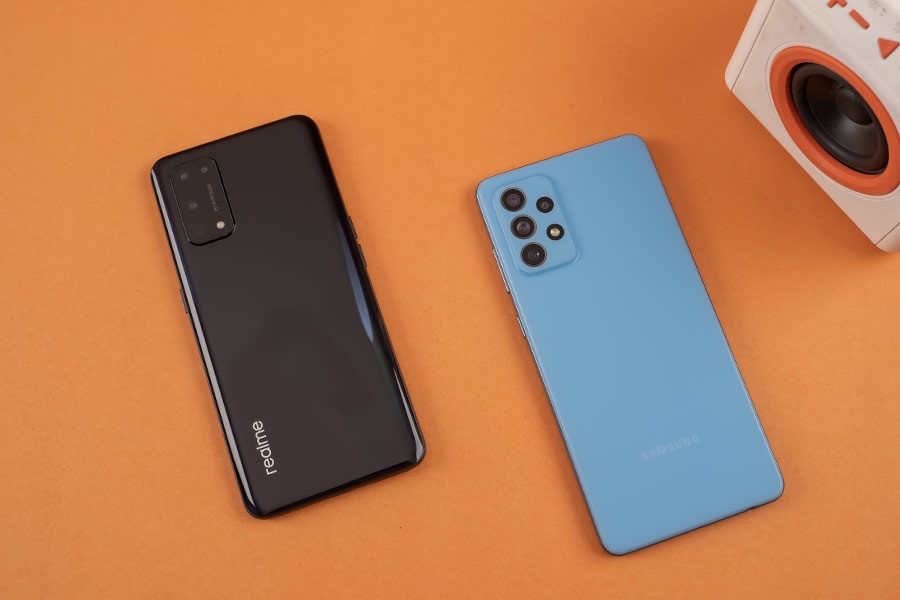 Realme X7 Pro, on the other hand, is a comfortable device to use. It has rounded corners that aid in the grip. But the caveat here is that it looks really ordinary, especially this Mystic Black color variant that I have with me.

It’s as if you’re holding a $200 phone rather than something that costs $400. But keeping the ergonomics and looks aside, the Galaxy A72 also features an IP67 dust and water resistance which is something new on a non-flagship phone, thereby earning an edge in the design aspect.

But Realme does take the win here since it comes with a flagship-grade panel, which btw is the same screen that you’ll find on the OnePlus 8T. Therefore, not only are you getting a higher 120Hz refresh rate, but X7 Pro’s display also has a slightly superior quality compared to the A72. 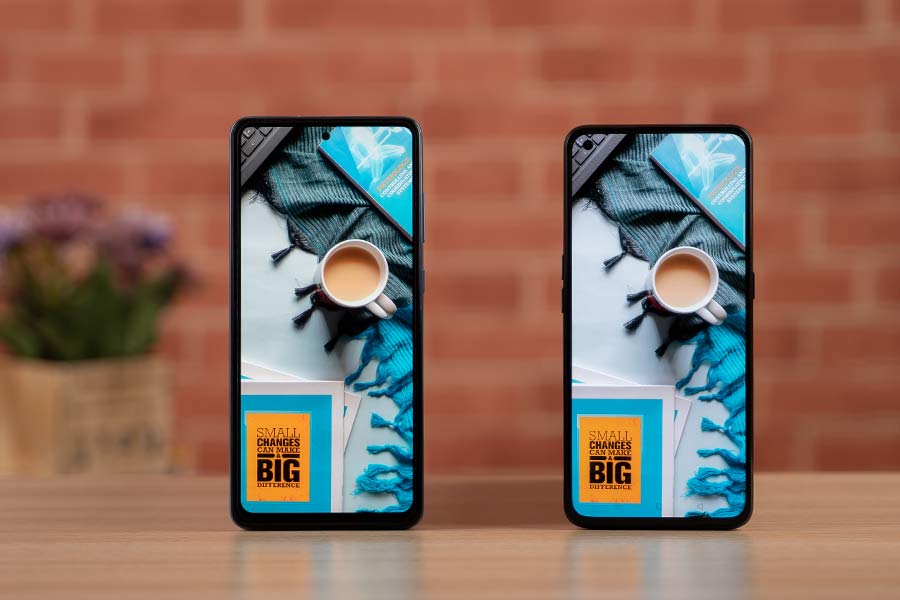 Additionally, both phones feature under-display optical fingerprint sensors. Yet, Realme’s implementation is faster even with the animation on while Samsung’s in-display sensor is slightly slower.

Realme also has a big advantage in the performance department. It features MediaTek’s top-end Dimensity 1000+ chipset while the A72 uses a mid-range Snapdragon 720G processor from Qualcomm.

Although Samsung has worked to improve the optimization on the phone, ultimately, it’s no match to Realme’s excellent selection of chipset. From regular usage, gaming to benchmarks, the X7 Pro is streets ahead of the Galaxy A72. Plus, the Dimensity 1000+ is also a 5G-ready chipset which makes X7 Pro more future-proof than the A72.

Just to show you how faster the Realme X7 Pro actually is, I conducted a couple of speed tests, including app opening and multitasking tests. And in each of them, the X7 Pro outperformed the Galaxy A72 by a considerable margin. Similarly, in multiple video rendering tests as well, the A72 was slower in completing the task. But, I do have to tell you that both of them do a similar job in terms of RAM management. They can hold apps in their memory pretty well and I’ve had no issues whatsoever with either of them.

Getting to the gaming side of things, with a higher-quality GPU on the X7 Pro, you will be able to get more fps, all the while playing games in higher graphics settings.

But when it comes to the software, Samsung’s One UI is the better Android skin, period. Realme did change the look and feel of its UI, but it’s still OPPO’s ColorOS in disguise. On the other hand, One UI looks much better, is simpler to use, has less bloatware, and its features like dark mode, always-on display are better optimized too.

Not to mention, Samsung has also promised 3 generations of OS and 4 years of security upgrades across almost all of its devices which Realme simply hasn’t been able to match.

Okay, let’s get through with the cameras now. I did briefly compare these cameras in my full review of the A72, where I said that the A72 has slightly superior camera capabilities, and that still holds true.

You can see that in normal daytime images, the A72 has a better dynamic range and has chosen to portray natural colors in its pictures.

On the other hand, Realme’s photos are comparatively more saturated. Other than that, both cameras are quite competitive in terms of details, sharpness, and the likes.

The wide-angle images share a similar fate as the primary ones with the A72 having a slightly better dynamic range.

Plus, it has a relatively wider field of view too. Except that, there is hardly anything to distinguish among them.

Here, the A72 also has an edge when taking zoomed images as it features a dedicated 8MP telephoto lens while the X7 Pro misses out on that.

So, naturally, Galaxy A72 has better zooming capabilities than the X7 Pro. It can shoot up to 3x optical and 30x digitally zoomed photos while the X7 Pro maxes out at digital zoom up to 5x. As far as the quality of such images goes, as you see, it’s better and sharper on the A72.

Realme also struggles with the skin tone in portrait shots as it has this red tint in the subject’s skin that makes it look a little unnatural. On the contrary, Samsung tries to bring out a more natural hue.

Still, subject focus and background separation are good from both cameras. Having said that, portraits from the Galaxy A72 look better most of the time. But there are instances like this one here, where Realme is able to deliver superior portraits.

Besides, A72 also boasts OIS in its primary and telephoto lens which means not only you are going to get better video stabilization, but it also delivers better nighttime shots.

As you can see from these images, low-light images are better on Galaxy A72 with better exposure and details while X7 Pro tends to saturate the images and are a little muddy too.

With night mode turned on, Realme’s images restore considerable details. But again, Samsung’s images have slightly more details and are brighter too. However, because photos from the X7 Pro have a slight pop in color, most of the time, it might seem like the better of the two, when in reality, that’s not the case.

In terms of selfies too, Samsung is a bit superior. Here, the reddish tint on the X7 Pro’s selfies looks a bit unnatural.

But, details and subject focus are on point. There are instances when X7 Pro manages to make the subject look good, but with the A72, it is almost all the time.

Portrait selfies share the same story with Realme struggling to manage skin tone properly. The blur amount and background look equally good on both devices though.

Coming to the front, the X7 Pro can go only up to 1080p 30fps while Samsung lets you shoot stable videos even at 4k 30 fps. Likewise, with the ultra-wide-angle lens too, Samsung allows recordings up to 4k 30 fps while Realme limits the X7 Pro to just 1080p 30 fps.

Moving on to the battery, the Galaxy A72 has a bigger 5,000mAh cell while the X7 Pro settles for a smaller 4,500mAh unit. With a bigger battery and a 90Hz refresh rate, you will be able to get slightly better endurance with the A72. 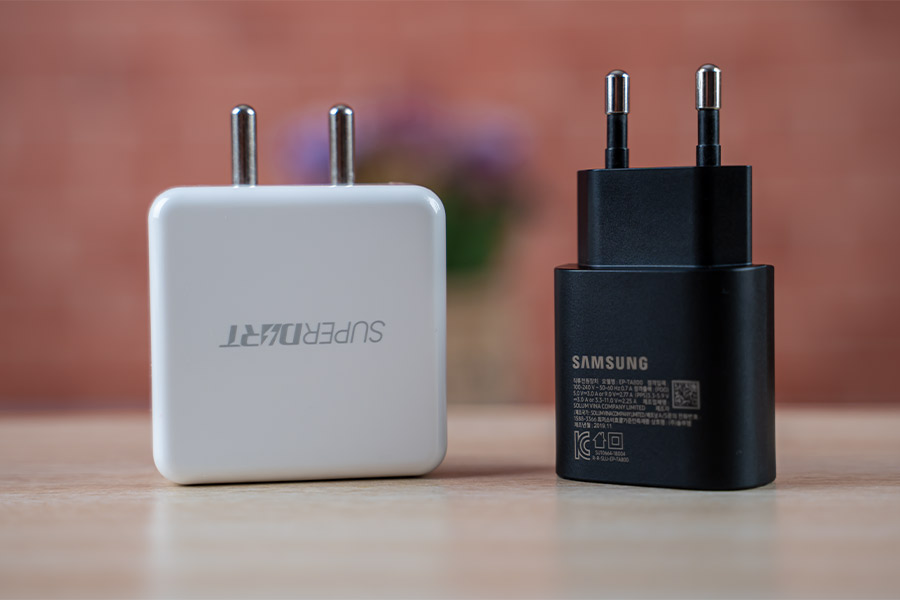 However, Realme X7 Pro gets a much faster 65-Watt fast charging that takes the battery from 0 to 100% in just 35 minutes while Samsung’s 25-watt charger requires more than twice the time to juice up.

Since these two are premium midrange phones, both of them feature a stereo speaker setup with really good audio output. But, the audio from Realme X7 Pro sounds louder and fuller.

Likewise, when it comes to haptics, Realme’s feedback is more subtle and feels nice whereas A72’s haptics feels slightly cheap. Although Samsung gives you an option to change the intensity of the vibration, even in the lowest setting, it feels like too much.

Okay, time for the moment of truth. Based on my findings, the Realme X7 Pro comes off as a better value-for-money phone as it is cheaper than the Galaxy A72 and yet offers a superior screen, faster performance, and excellent audio and haptics. Samsung, on the other hand, delivers good looks, better software support, and slightly better camera quality.

But, if you compare the popularity and sales figures of these two phones, they vary a lot. In fact, the Galaxy A72 outsells the X7 Pro by a huge margin. And although it’s quite surprising, I think it’s ultimately because of Realme’s incompetence and Samsung’s excellent marketing campaigns that have led to this outcome.

First off, Realme didn’t create enough hype for the X7 Pro as much as they should have. They launched it in China back in September of 2020, only to bring the phone 3-4 months later to India. Likewise, at a time when Realme needs more people to talk about their premium phones, there seem to be very few unboxing and reviews in comparison to that of say, the Galaxy A72. For a company that wants to do well in the premium and flagship category, Realme could do better. And speaking of premium phones, the company also announced Realme GT and the GT Neo recently, which look quite good on paper.

But, their launch roadmap is unclear and ambiguous. So, my suggestion to Realme is, instead of focusing and losing energy and resources in launching the same rebranded Narzo phones, maybe you could look at how good of a prospect you have in the premium mid-range segment, and how the Realme X7 Pro failed in this category despite having superior specs than that of the A72.