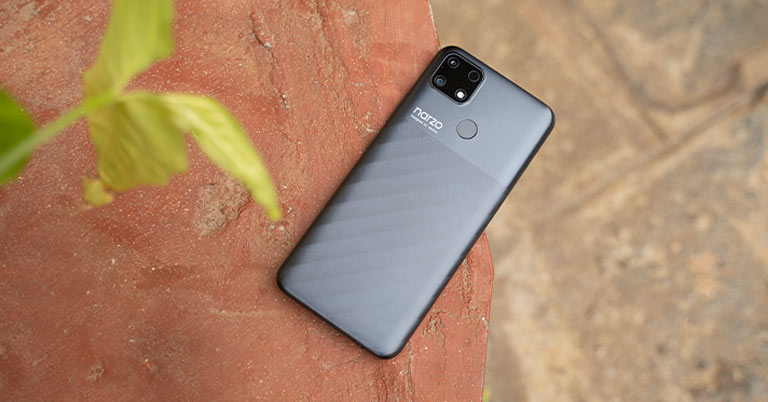 Realme found great success by capitalizing on the needs of the young audience. Its “Narzo” lineup of smartphones caters to the very same demographics. Complemented by a plethora of hip marketing campaigns while the products themselves share a significant bit of similarity with the company’s number series, Narzo-branded smartphones are quite the standout. Adding to the lineup, Realme recently unveiled the Narzo 30 series which includes a budget and a 5G-ready mid-range phone. And today, I bring you our full review of the Realme Narzo 30A.

Here, the Narzo 30A that I have with me is the affordable one of the two. Retailing at just INR 9,000, it packs a pretty capable gaming chipset and an exciting design. But with Xiaomi’s latest Redmi Note 10 series into the mix, one might be wondering if it makes sense to invest a little more for a far superior smartphone. Well, let’s discover more in this review of the Realme Narzo 30A.

To set itself apart from the competition, Realme has historically leaned on offering a distinct design, and that tradition follows suit with the Narzo 30A. Looking at the phone’s promotional materials, its striped layout at the back almost had me fooled for a grippy cover. That would’ve been pretty dope, actually. However, it’s nothing more than a painted texture that still looks quite unique.

Additionally, while the phone is fairly immune to fingerprints and smudges, this design choice is prone to moisture from your hand. As a result, I often found myself having to wipe the sweat off the back of Narzo 30A. Although the phone sits quite well in the hand, it is a considerably heavy phone. Weighing 207 grams, it is definitely not for those who prefer something lightweight.

For biometrics, there’s a traditional fingerprint scanner at the back. It is pretty fast and therefore never had me going for the face unlock alternative. Unfortunately, Realme doesn’t let you access the notification tray by swiping down the scanner. All things considered, the Narzo 30A gets a point in terms of its design. The buttons click nice and even though it’s by no means a compact phone, I find it sitting snuggly in my hand.

While I am at peace with the phone’s design, the display is where it has let me down. At a time when its arch-enemy Xiaomi is stepping up the game by providing a Full HD screen at a similar price-point, Realme’s dumbfounded ignorance is only hurting itself. Consequently, watching videos on the Narzo 30A is an underwhelming experience. Now, Realme would’ve easily gotten a pass on this regard about a year ago but things have changed. And I simply can’t recommend this phone to those with content consumption in mind. That’s further backed up by the fact that Narzo 30A is just Widevine L3 certified, restricting you to sub-HD (540p) content streaming only.

I also noticed its color science leaning on the cool side of things. Thankfully, you can adjust the screen color temperature, yet Realme’s implementation isn’t as extensive as Xiaomi. Moving on, the phone has a minimal teardrop notch and rounded edges on all four sides, with no visible discoloration. Barring Narzo 30A’s significant chin, the bezels on the remaining edges are fairly minimal. Similarly, this 6.5” IPS screen can get plenty bright although it will struggle outdoors.

Likewise, I find its viewing angles to be a tad bit sub-par as well. Looking at this display from the side, you’ll likely notice a drop in saturation level. Apart from this, for casual web browsing and similar use cases, Narzo 30A’s screen won’t disappoint.

Now, jumping into the performance, Realme has paired this phone with MediaTek’s Helio G85. This is a pretty competent gaming-first chipset that was used in the company’s Narzo 20 from last year as well. We’re naturally led to believe that G85 brings some significant upgrades over the Helio G80, but the reality couldn’t be farther from the truth. Apart from a mere 50MHz boost in GPU frequency, both silicons are one and the same. What I’m trying to say here is that we, as consumers, shouldn’t be playing into the manufacturer’s number game. And this is not exclusive to Realme, by the way. Companies use this (sadly) effective technique to gain bragging rights to highlight their product’s superiority.

But I digress. Here, Narzo 30A gets either 3/4GB of LPDDR4X RAM and 32/64GB of internal storage. Our review unit is of 3/32GB configuration and with this, I got to relive something I’d moved away from a long time ago. Because it’s a budget gaming phone, I wanted to test out a couple of titles to reach a verdict. However, the puny 32GB memory couldn’t hold as many games as I’d want to—thereby making me uninstall a game or two every now and then.

And the cherry on top is the fact that the system itself occupies an unacceptable 13.7GB, resulting in the effective available storage to just 18.3GB. Like I mentioned earlier, there is a 64GB variant as well but I guess we can all agree that 32GB shouldn’t be the default storage space in a 2021 smartphone. Let’s now take a look at some benchmark scores.

Moving on to gaming, I played a few games and got a respectable performance.

You can crank the settings to HD graphics and High frame rate in PUBG Mobile, and this results in fairly smooth gameplay. The rare instances of slight stutters under these settings are absolutely excusable. 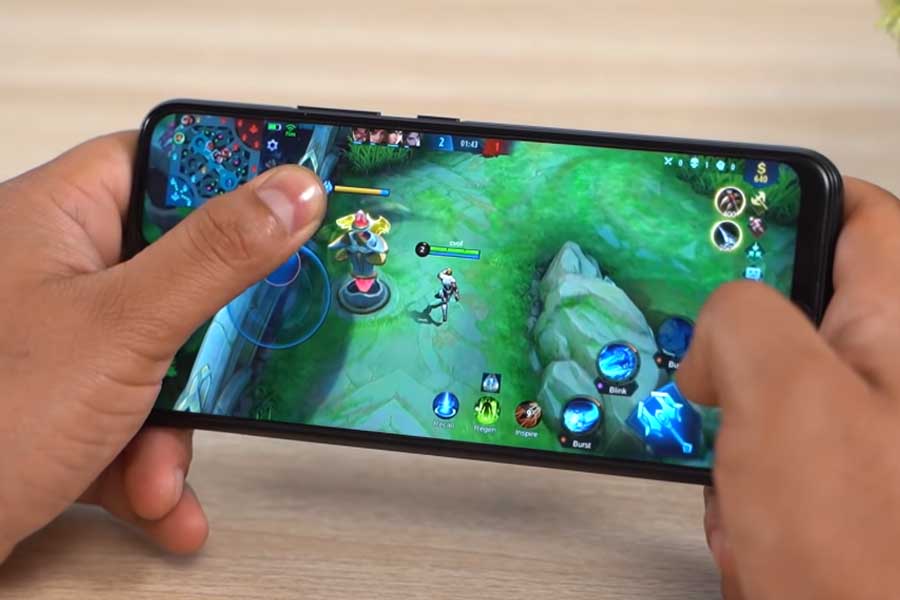 But if you want the best PUBG Mobile experience, you’d want to set the graphics to Smooth and frame rate to Ultra. After about 20 minutes of gaming, the phone got to 42C (CPU) and 38C (battery) which feels warm to touch, but not scorchingly hot.

Additionally, COD Mobile maxes out at Medium graphics and High frame rate and it’s smooth sailing here. Zero stutters or lags. Similarly, Mobile Legends: Bang Bang is equally playable at High graphics with shadow, damage text, and other visual enhancements turned on. After around 30 minutes of gameplay, Narzo 30A delivered a comparable thermal performance too.

While the gaming side of things is commendable, Realme has “dared to leap” in the exact opposite direction by shipping this phone with the now-outdated Android 10-based Realme UI 1.0. What’s worse is that the company’s recent blog post revealed that Narzo 30A will get Realme UI 2.0 (Android 11) only in Q3, 2021. By that time, we may already see Google unveil Android 12. Once again, this is simply not an admissible offense and Realme deserves harsh criticism for this behavior.

Anyway, Realme UI 1.0 isn’t half bad, to be honest. It is quite well optimized and is pretty responsive too. By default, swiping down on the home screen triggers the search menu but you can customize it to launch the notification drawer instead. I also like the “Game Space” that optimizes the system resources, blocks notifications, and such automatically on compatible games.

Let’s get into the cameras now. Realme has gone with a classic camera layout on the Narzo 30A. While you may mistake it for a triple-camera arrangement, the phone only has two lenses at the back—a 13MP primary, and a 2MP portrait sensor. I tried comparing it with the Redmi 9 Power and here are the results.

Compared to the 48MP primary camera on the competition, the normal daytime images from the Narzo 30A lag behind in terms of details.

While I personally don’t prefer the high saturation on Redmi 9 Power’s photos, it does generate more popping colors. You can turn on “Chroma Boost” for the same on Narzo 30A though. In some instances, the phone also over-sharpens the images.

Portrait images share a similar story in terms of color reproduction as well. But, the ones from Redmi 9 Power underexposes the subjects by a bit, making them look a little dark.

On the other hand, Narzo 30A has a relatively cool color temperature and a more digestible result. In terms of edge detection, both phones are on par with each other.

Here, the Redmi 9 Power wins out in terms of regular nighttime and night mode shots.

More importantly, if you’re shooting in an environment with direct light sources, the images from the 30A will fall victim to rabid lens flare.

Redmi 9 Power’s 8MP selfie shooter manages to deliver better dynamic range and details compared to the 8MP sensor on the Narzo 30A. While the former has a yellowish hue, Realme’s alternative has this soft pinkish tint.

In terms of videos, both phones max out at 1080p/30fps recordings from front/back cameras. I found that Narzo 30A can capture relatively superior footage. In both instances, the Redmi 9 Power has worse dynamic range and exposure control.

When it comes to battery life, Narzo 30A is a champ. Thanks to a big 6000mAh cell, I was consistently able to get 7-7.5 hours of screen-on-time on this phone. And that’s including multiple sessions of continuous gaming as well. Realme even says you can achieve up to 10 hours of gaming but that claim seems questionable. And if you’re someone who doesn’t game a lot, it will easily last you a couple of days. 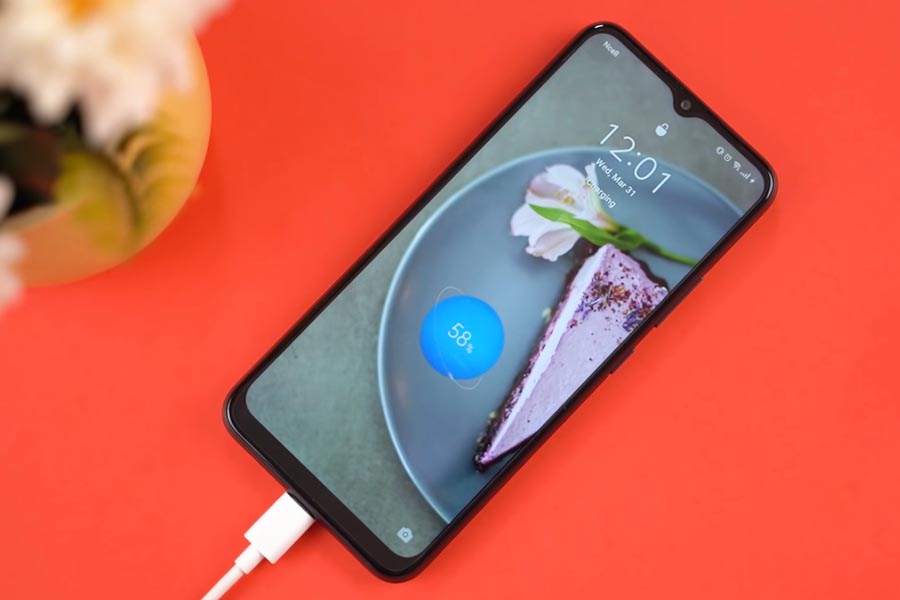 Charging the phone is quite slow though. The 18W fast charger included inside the box takes almost 3 hours and 10 minutes to take Narzo 30A from 2% to 100%. It also supports reverse charging, so you can transfer power from the phone to other devices including smartphones, wearables, etc.

Likewise, its audio quality isn’t that bad either. Now, you don’t get a stereo speaker setup like on the Redmi 9 Power but the sound output is pretty good. It gets loud enough and is most suitable for listening to podcasts or similar acoustic content. Just don’t expect it to fare well under dynamic audio/video files.

To finish up this review, I feel like the Realme Narzo 30A is an underachieving phone on many fronts. It has a compromised 720p screen, a dual-camera setup, and an under-powerful 3/32GB starting model. At a time when most other manufacturers are starting to standardize the 4/64GB base variant, it’s a direct step backward. 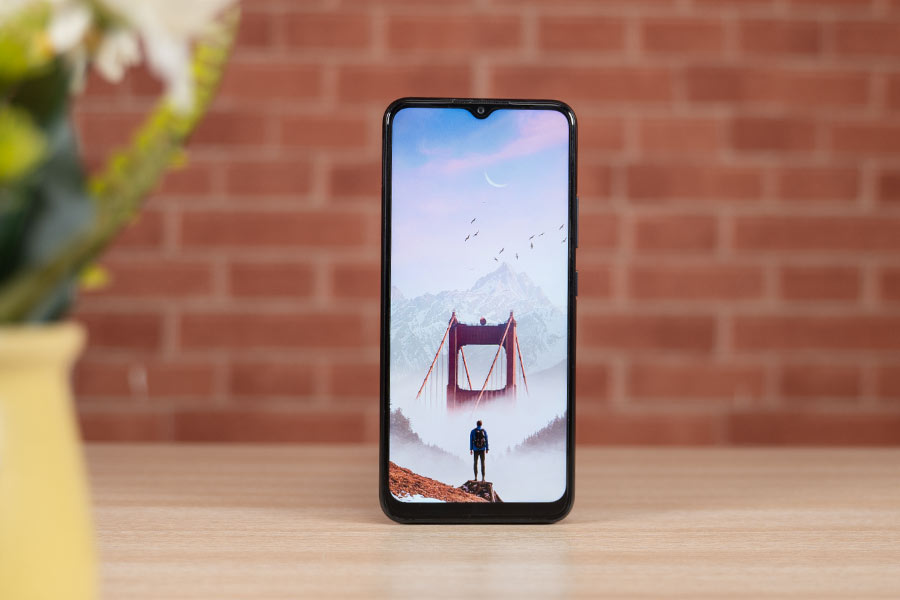 Plus, the phone still runs on last-gen Android 10, with the Android 11 update scheduled so late. Yet, it does have a few redeeming qualities like its gaming capabilities and battery life. But at the end of the day, you get so much more by cashing in a couple of thousand rupees more for the Redmi Note 10.